Still in the mood for some World War II action, I got myself thinking about a horizontal shooter that would allow me to have some fun after the nice albeit difficult 1CCing of Strikers 1945 II. It should be easy, and it didn't matter if I had beaten it before. That's when my eyes browsed through my collection and stopped on Fire Mustang for the Mega Drive.

And yes, this is an easy game, at least in its first loop. It's perfect for those relaxation moments, for its simplicity alone. Its original name in the arcades was US AAF Mustang, and I remember that I had the honor to see this machine running in a local joint when I was a kid - and being amazed by the fast parallax scrolling and the nice bombing effects that sometimes shook the whole screen. 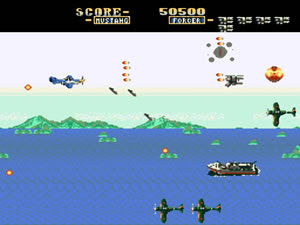 The nicest thing I can say about the Mega Drive port is that it seems to preserve the scrolling speed of the arcade with no signs of slowdown. A little flicker happens now and then during boss confrontations, but it's no big deal. Graphics are not spectacular when judged by a screenshot, but they do look nice with all the parallax, and the explosion sprites are really cool for a 16-bit game. It has a fast pace and allows for all kinds of manoeuvers, since there are no obstacles whatsoever apart from enemies. This is kinda odd for a hori shmup, but in my opinion it adds to the aforementioned relaxation nature of the title.

OK, to the gameplay!
There's just one type of weapon, which can be powered up twice for a final 3-way forward vulcan shot, additionaly complemented by small bombs dropped forward in a Darius fashion - these have devastating power when used at close range. Smart bombs (here called Forcers) can be stocked up to a number of 8, and will destroy every bullet on screen while inflicting damage to enemies, no matter if they're in the bombing range or not. Each power-up or bomb icon collected after you've reached the maximum number allowed is worth 10.000 points, and that's all for scoring possibilities. There's also a ranking system that will make enemy firepower more intense if you reach later levels with extra lives gained, and that's the little challenge that rises as the game comes close to its end.

I don't have any problem with that, and by that I mean the simplicity of the weapon and scoring system. I can live with it. 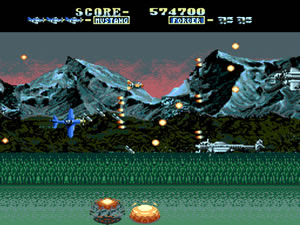 The real problem of this game is how badly programmed it is. You have 2 continues when you start, and it's just impossible to reject a continue after you die your last life. This makes Fire Mustang for the Mega Drive the first shmup I know that has an auto-continue feature! And guess what? When you continue you lose track of your current score, because there's no high score screen and the computer demo play only shows your last score. That way, if you want to take note of your high score you have to start the game, die 3 times, continue, die 3 times again, continue and only then have your 1 credit run (because then you have the game over screen and your score is buffered to the demo play).

For a title that's relatively short Fire Mustang is mildly fun, and at least compensates the lack of substance with a very fluid gameplay. The best tune is the 6th stage BGM, while all others are just military resembling 16-bit music fare. Being a cheap Japan only title (if you don't count its inclusion in the game list of the late Mega Drive consoles released in Brazil by TecToy), I believe it's worth getting for all western MD and shmup collectors alike. 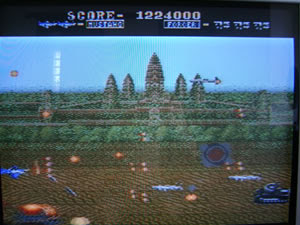