Games continued to be released for the Sega Dreamcast way after the console's demise, and Radirgy is part of a shooter batch that helped keep the console alive among fans of the genre in early 2006. Following the unique Chaos Field, it was Milestone's second outing for the platform and continued the company's intent to bring something new to the table, this time in the way graphics were rendered. Some people liked it, some people still don't dig it, but I personally find the cell shaded graphics rather charming and inviting, even relaxing, especially given the frantic nature of most bullet hell shooters out there.

People who don't have patience with shooters that seem plain on the surface tend to shy away from this game, saying bollocks about it being too slow and generic. Their loss, huh?

"Radirgy" is a short for Radio Allergy. This concept lends itself to a whole particular style applied to the gameplay, the graphics, the music and the characters. You pilot a mecha that can shoot 1 out of 3 start selectable weapons (green vulcan, orange laser and blue bubbles) and can travel at 1 out of 3 start selectable speeds. You have a sword that can be used in up-close combat and a deflector shield (the ABSNET) that melts bullets, damages enemies and makes you invincible for some seconds. If you stop shooting a tiny barrier will appear in front of you and deflect all small incoming bullets. The ABSNET meter must be filled with blue pills collected from killed enemies, but sword attacks fill it faster than your regular shot. Everything that's hit by the shield or the tiny barrier generates green pills that fill up the multiplier meter, which is split into 4 zones (×1, ×4, ×8 and ×16). Using the sword while firing is possible, but the firepower range is reduced when you do it. The whole catch of the game is finding a balance between filling and using the ABSNET shield at the right moment and keeping the multiplier in the ×16 red zone for maximum scoring possibilities. 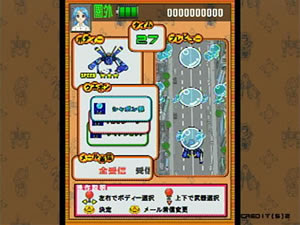 Icons left by enemies include lots of unrelated small point bonuses and meter fillers. They can be bounced by using the sword, and this action will either increase their value or change them to another kind of icon. The most valuable ones are the purple diamond that replenishes your ABSNET, the yellow triangle that boosts your multiplier by ×4 and the one that changes all on-screen bullets to blue ABSNET bits/points. An extend is granted at 8 million and 20 million points, but you gotta be smart: only if you catch the green icon that appears right after you reach the extend score will you get the extend. If you let it pass you’ll lose a precious extra life! This green icon looks just like the power-up icon, only it comes out of nowhere instead of being guarded by a flying enemy.

Radirgy is a bullet hell shooter, but of a special kind. With the exception of the attacks from mid-stage and stage bosses, all bullets and enemies travel rather slowly. The more experienced the player the faster he’ll find himself looking for the best strategy to kill enemy waves and keep the meters filled. However, bullet count does get extremely high by the middle of the game, and that's when you realize you must master the control of the ABSNET shield in order to survive the bullet curtains. This automatically forces the player to score high in later stages, while taking away the natural bullet hell characteristic of the game and turning it into pure adrenaline bullet sucking mayhem. That’s where most of the fun lies in Radirgy – when you’re deep into the heaviest parts of stages 4 and 5. But soon enough the bosses come to remind you it takes more than the ABSNET to reach the end of the game… 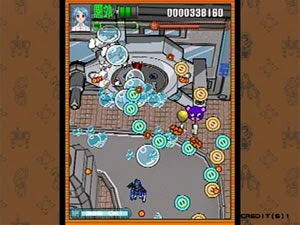 It’s easy to get tricked by the slow pacing, just how it’s also easy to lose all your lives in a snap. I really enjoyed the learning curve here though. Just like all good late shooters it offers several points of overwhelming difficulty that get you really thrilled once you find out how to overcome them, this time with no considerable frustration factor (and yes, by that I mean Cave). An example is that pricky 4th mid-boss: I can go past him unharmed, but I still haven’t worked out a suitable way to beat him before he leaves the screen…

There’s a lot of flexibility provided by the speed selected at the start. I feel very comfortable with the mid-speed (3 stars). Maximum speed (5 stars) is the best option for score purposes, but it makes weaving though bullet waves more difficult, whereas minimum speed (2 stars) did not allow me to cover all the screen area I wanted. For the sake of time and less stress, be aware that those email messages received in-game can be turned off by pressing X at the selection screen.

On a last note, Radirgy’s music is of a laid back nature, just barely complementing the graphical style in a non-remarkable fashion. It’s the sort of work that does not draw any attention up front, but grows on you with repeated plays. My favorite tune is played during my favorite stage, the 4th one. And I don’t know why, but the main girl character reminds me of Daria from Beavis and Butt-Head!

The score below was achieved on NORMAL using the laser mecha running on mid-speed (3 stars): 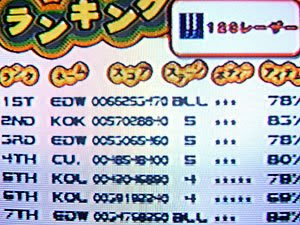