During the whirlwind of the 90's shooter frenzy several minor shmups were released for the most prominent platforms, and Task Force Harrier EX was a perfect example of this batch. For the most part it's a very standard vertical jet shooter, the kind that's easily overlooked by the regular shmupper or even completely avoided by the casual gamer. With no advertisement at all, it was indeed ignored by most people, but I did get a chance to try it at the time the Mega Drive was still rocking. And now I have just given it proper play and 1 credit clearing.

Contrary to what I had always thought, this title isn't exclusive to the MD. It's actually ported from an arcade game and includes different features or gameplay aspects (check Sega-16's review for a comprehensive comparison between the arcade and console versions). 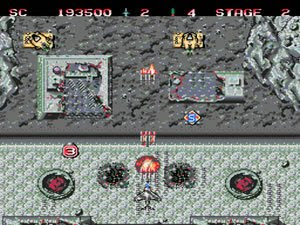 I remember I had a very good impression of Task Force Harrier EX back in the 90's. There weren't so many shooters like it available for the Mega Drive, and it was fun to play. My opinion has shifted since then, as I do think the game hasn't aged well. While not so bad graphically, the absolute lack of parallax or similar effects adds negatively to the game's poor color palette, especially during the first 4 stages - where everything seems to be black & white. The music is okay and implemented in a weird way, meaning all BGMs are used for two consecutive stages. The game has 13 stages (the last one being the final boss confrontation) and because of that it feels a bit overlong. Considering the fact that the real challenge only kicks in after the 4th stage or so, you have to spend a lot of time mostly killing bogus enemies. After a few play sessions this makes the first part of the game extremely boring and repetitive.

The jet itself has a decent variety of firepower. The main shot is upgraded with the S icons, and as soon as you pick the first missile icon you also get the side options. These options can be arranged in four different formations, where each one makes the jet fly at a different speed (slowest = options on the front, middle speed = options on the sides × 2, fastest = options on the back). These options also serve as protection from incoming regular bullets. There are 3 types of missiles that the options can fire (guns, homing and straight rockets), and they are also interchangeable with particular icons. Bombs must be used to kill ground targets, and they can be deployed in 3 ways: horizontal line (type 1), vertical line (type 2) and cluster blast (type 3). It's necessary to stick to the same icon if you want to upgrade a particular kind of missile/bomb. My favorite picks were always homing missiles + type 3 cluster bombs. Last but not least, there's also a smart bomb that damages enemies and wipes out all on-screen bullets, triggered with the C button. 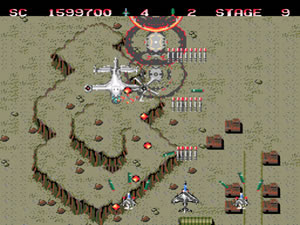 The stages alternate between aerial combats and exclusive ground attacks where your main shot can also destroy ground targets. There's a little rank but it's not really noticeable until you reach the 9th stage, and extra scoring techniques comprise only the 10.000 points for excess power-up icons. For those who enjoy an easy shooting challenge Task Force Harrier EX feels perfect for 2/3 of the game, and the available CONTINUES should help later on. You start with just 2 lives (weird for a regular shmup), but extends are given with 100.000, 500.000, 1.000.000 and 2.000.000 points. There are very cool opening and ending sequences that show a little bit more of your heroic fight against the communist terrorists (!), but besides that the game has nothing noteworthy. Overall I consider it bland and a little uninspired.

Knowing in advance that this game does not buffer high scores - which means you can't see how much you scored after the GAME OVER - I paused right after beating the last boss and took the picture below, therefore recording my official high score for Task Force Harrier EX (NORMAL difficulty). 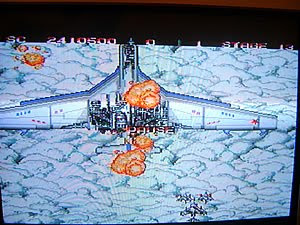