For those who grew up shmupping during the 80s and 90s, Toaplan is a name that demands respect. One of the major companies in the genre, it established and developed concepts and trends for over a decade before closing its doors and giving birth to well known names like Cave, Raizing and Takumi. That's why for each DoDonPachi, Battle Garegga and Giga Wing we have to bear in mind that there once was an embrionary game such as Tiger-Heli to pave the way. It sure is a change of pace to go from one end of the spectrum to the other, since Tiger-Heli was already slow by the time it was released and doesn't seem to belong at all in today's frenetic shmup reality. Does that make it an easy game? Hell, I don't think so. Are you willing to try it?

Banpresto was really nice to Playstation fans and included Tiger-Heli in the Toaplan Shooting Battle 1 compilation, together with its sequel Twin Cobra/Kyuukyoku Tiger. From what I heard, the game is a perfect emulation of the arcade original, a shooter that puts you in charge of flying a helicopter through urban terrain, ocean and a little bit of forest in order to blast everything that moves. Since there are no aerial opponents (airplanes appear either stopped or taking flight, but never shooting), the bulk of the enemies consists of tanks and turrets, either ordinary or heavily armored. Houses, civilian cars and other harmless targets such as a bonus racing car can also be destroyed for score. Though not clearly stated, each stage starts with the chopper taking off and ends when it reaches a landing point, where the stock of two bombs will be replenished. There are four stages in total, after which the game will restart in the 2nd stage and forever loop through the last 3 stages. However, in the high score table you also have your performance measured by "areas", which is probably related to checkpoints. 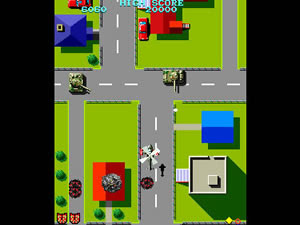 Wait there, airwolf, that's my neighborhood!

Whenever I think about a slow vertical shmup I think about Tiger-Heli. There are no speed-ups, and from early on it's necessary to get used to the sluggishness of the chopper and the aimed shots of your enemies. It's really common to die from a surprise bullet shot by a tank that appears from behind or from the sides, since there's no such thing as point blanking and the bombs aren't of much help. There's one bomb on each side of the helicopter, and even though they will self trigger when hit by a bullet there's no guarantee the explosion will protect you from harm. The explosion does nullify bullets, but besides having a limited radius it's also deployed with a painful delay that not rarely costs the player a precious life. Another feature that has a considerable annoying factor is how your shot only covers part of the screen and forces you to remain roughly in the centerline if you want to hit stuff coming from the top.

The only way to increase firepower is by hitting the colored blinking crosses that show up. They release special "little helis" that can be docked on the sides of the helicopter: the white cross gives a straight-shooting little heli, and the red cross gives a side-shooting little heli (a green cross gives an extra bomb). The little helis can be shot down and destroyed, and sometimes it's just impossible to keep them when maneuvering through the bullet concentration. If you manage to reach the landing point with little helis, each one is worth a bonus of 5.000 points. This bonus extends to the number of bombs as well, with a maximum bonus of 20.000 points per stage completion. In-stage excess items are worth 5.000 points. The other icon that appears from time to time is a pulsating yellow square that's worth some points and adds to a counter on the right lower side of the screen. When this counter reaches 10 the player is granted with an extra life. Score-based extends are given with 20.000 points and then 80.000 points after that (beware that the Toaplan Shooting Battle CD has this defaulted to 50.000/150.000 points, which should be properly adjusted prior to playing).

I have to admit Tiger-Heli is an acquired taste. By all standards it's a very primitive shooter, one that goes just a little beyond the very basic. There are only two music tracks in the whole game, one that's played while you have a solo helicopter and one that plays as long as you have a little heli. At least these songs are catchy and fit perfectly with the helicopter motif. As a shmup experience, I tend to like the NES port better, since the difficulty of the PS1 version is a lot more punishing and the quality of the NES version is outstanding by 8-bit standards. I remember I did enjoy the 8-bit version, and I should be replaying it in the near future just for the sake of knowing exactly how it measures up against the original game.

My high score on the PS1 version of Tiger-Heli was obtained on NORMAL, with game speed set to ARCADE (general options menu) and heli speed set to FAST (specific game options menu), reaching stage 2-2. In reality, I didn't notice any substantial difference when changing these speed settings. I played it in yoko, but the CD allows tating on all included games. 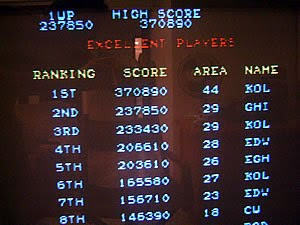