Capcom's oldest shooting license recently got a rebirth in modern day consoles with 1942 - Joint Strike. Let's not be fooled by the impression that this is a remake of the original 1942, one of the cornerstones of arcades in the 80s and the first in a sequence of rather successful games. It is, in a sense, an HD reimagination of the whole series, taking aspects from several titles in order to deliver a renewed experience that ultimately fails to live up to the 19XX legacy. 1942 - Joint Strike is one of the most severe cases of shmup disappointment to ever have graced a console screen. It shamelessly joins the roster of cheap downlodable titles that don't do any good to the genre, especially in a platform where real, full-fledged shooters are practically non-existent.

I first beat this game while waiting for the After Burner Climax download to complete. The transfer was so slow that I thought it would be a good opportunity to finally get acquainted with one of the games I've had for months but never cared to even touch. Imagine my surprise when after just five stages the game was simply over. Of course this wouldn't be so shocking if these five stages weren't so easy and riddled with such unimpressive music. It's like watching one of those blurry war dramas of the 60s at 2 AM. The music is so dull that it's like there's no soundtrack at all. Just to have an idea, even the beeps and blips from 1942 on the NES sound better to me than the yawn-inducing musical score that was composed for Joint Strike.

And you thought I would complain about the gameplay, didn't you? 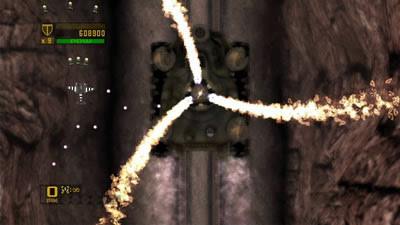 Why do so many bosses rely on napalm when they're about to die?

The gameplay isn't that bad. It even offers a few thrills if you decide to explore the scoring system. The first rule to get higher scores is to kill all enemies as close to them as you can. The second rule is to kill all bosses as fast as you can. In order to achieve that there are three planes at the player's disposal, each one with different characteristics for speed, firepower and health. They all share the same weaponry, which comprises three icon-switchable types of main shot (straight, spread and laser), bombs and a constantly renewable stock of special attacks. The main shot can be upgraded twice by collecting the same weapon icon, and up to 8 special attacks can be stocked (and replenished) just by killing enemies. This special attack works as a series of missiles that home on the nearest enemy/enemies. During co-op or online play it works differently, but I haven't bothered to check that. There are two kinds of temporary extra weapons, but they are so scarce and last so little time that don't do any real difference in the game. Adding to score-based extends (for each 500.000 points), occasional 1UPs might also pop up. Each life has a health bar and health replenishers appear constantly, alternating with extra bombs in the same icon.

Following the trend of the series, all icons are released by the red planes, and the red ones that arrive in formations must all be destroyed for the icon to appear. Some of these will be converted into medals, which are worth points, but medals can also be triggered by hitting certain areas of the terrain.

Minor annoyances such as resetting the weapon's power when switching it are no big deal, but I did miss an option for autofire - which is partially justified by the existing charge mechanic. Sure, the charge is reasonably fast, but with so many buttons on the controller why not have one of them mapped to autofire?

In its native setting, 1942 - Joint Strike plays vertically in glorious, pure widescreen. This is probably the first vertical genuine shmup to do so, and while some people might be put off by that, I think it has no bearing at all in how it feels or plays. From the moment you hit START some dedicated and brief cut scenes try to convey the idea of a moving picture, where the main parts come to life as the game itself. This is one of the features that tell how gorgeous Joint Strike really is, and it's just a shame that all this excellence isn't really put to full use into the overall game design.

The turning point for this game to get really easy is when you find out the special attacks are somewhat unlimited, that is, they get replenished pretty fast. All four difficulty settings are just the same, what changes is only the number of starting lives. I believe everybody agrees that the sequence after the 1st boss where you fly backwards and can't shoot is the most stupid idea in the game, but what I find even more annoying is the awful music. The sound effects are loud and effective, whereas the music simply kills the game. It's even worse than the bug I have on my console, where my score refuses to appear on the local scoreboard. That's why I took the picture of the last result I had when I beat the game on the DRAGON FLY difficulty (one level above the default) with the Mosquito airplane. 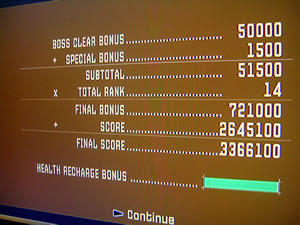