It's interesting to see reactions from modern gamers when they're exposed to such an old school shooter such as Heavy Weapon. Initially indifferent to how you're just allowed to move left and right and shoot, soon enough they realize it's actually "quite fun" and end up having a great time with it. I know I did, but I'm totally biased because I love (real) shooters. And this little, unpretentious title is definitely one of the most fun I ever had the chance to play in the so called downloadable portfolio of modern video game consoles. Don't take the simplicity for granted here, give this a chance and I assure you'll be exposed to a nicely designed, extremely fun and even quite challenging game.

Heavy Weapon was born on the Windows PC, being later ported to PSN, XBLA and Qualcomm/Tectoy's Zeebo, also appearing in retail compilations available for the PS2 and the Xbox 360. Despite the flashy albeit cutesy, simple HD graphics, it is infused with the same classic gameplay created decades ago by Taito for its Space Invaders series. This means you're only allowed to move along a horizontal line, shooting upwards to score and survive. However, the developer did something very simple that immensely enhances this basic idea: they added background scrolling. The resulting sensation of movement is a delight, and added to the small funny details and the intensity of the gameplay (imagine Air-Sea Battle on steroids) it helps to create the perfect scenario for a casual shmupping session. Casual because it's incredibly easy to grasp and also because it uses a simple twin stick control scheme - move the tank with the left stick, aim and shoot by moving the right stick. Give me my megalaser, dammit!

An "atomic tank" stars as the hero craft, fighting an enormous amount of enemies in order to defeat communist forces that threaten to overrule the world. Initially there are 9 stages to go through, but once these are finished you're told it was just a diversion, and that the real deal is about to begin when you have to go through everything all over again with many, many more enemies. Once all 9 extra stages are finished you finally face the 19th and last level of mayhem and chaos in the Red Star HQ. In between stages you're given the chance to activate/upgrade one of the available special weapons: defense orbs, homing missiles, laser, rockets, flak cannon and homing thunderstrike. Each one of them can be powered up three times, and choosing which ones to improve first is important for survival early in the game.

Every level consists of a campaign whose length is displayed in the upper map. In all campaigns a white helicopter carrier will go by releasing items, and this is the only aircraft you're not supposed to kill - if you do you're penalized and lose some points, being deprived of a part of the end of stage bonus as well. The items left by the helicopter and sometimes by killed enemies consist of spread shot (until you get 5 streams), speed-up (1 level only), rapid fire (increases fire rate slightly), gun power-up (1 level only), nuke (smart bomb), shield upgrade and 25% of megalaser. Nukes, which are deployed with the R2 button, can be stocked up to three. A huge temporary megalaser is activated once you get four megalaser items. With the exception of the power-up helicopter, it will kill everything in the screen instantly regardless of size or power level (unfortunately it's impossible to reach the bosses with an active megalaser).

Shield upgrades increase the number of shots the tank can withstand before dying (not to be mistaken with defense orbs). Every life starts with one shield and the tank is able to accumulate two more, thus making for a 3-hit shield when this aspect is maxed out. The catch is that there's no explicit way to tell how many shields you have left. The only indication is the green "aura" surrounding the tank: the greenest it is, the strongest the shield. If there's no green aura at all you're 1 hit away from being obliterated. When you die you never lose the upgrades applied before starting a mission, but you do lose all items collected within a stage. Besides this, Heavy Weapon is very generous because it always gives reinforcements if you lose up to two lives in a stage, meaning you always start a mission with three lives. When a mission/stage is completed, debriefing will tell and grant score bonuses depending on kill percentage (anything below 100% will cut this bonus in half), friendly fire (don't kill white helicopters) and survival (don't lose any lives).

I really think it's amazing how much fun it's possible to be had with such a simple game concept, and in this sense Heavy Weapon exceeded all expectations I might have had regarding downloadable games (it was one of the first games I downloaded after all). It starts out really easy, but it's a mistake to think it will remain like this. As the game progresses it adds new enemies, all of them with new attack patterns. While the first stage is very short, all subsequent stages are lengthier and certainly contribute to make Heavy Weapon a long game, thus incurring in potential repetition. However, when stage 10 starts the number and the multiple combination of enemies literally go through the roof, so you'd better have honed by then the art of dealing with all kinds of attacks if you want to avoid dying in a horrible explosion. Continuing is possible, but trust me when I say that aiming for the 1CC will require a few number of credits in order to maximize the chances of survival and master the techniques needed to go for a higher score.

Besides the main game, which is dubbed "mission mode", it's also possible to play a "survival mode" and a "boss blitz", your common boss rush credit. The game allows up to four players in co-op action both offline and online, so there's tons of fun to be had in every way you can imagine.

For a long while I played Heavy Weapon just to kill time whenever I had the chance, without ever considering the 1CC. That's good advice for everyone who enjoys old school shooting fun, but be warned: this game is highly addictive. The rocking music aligned with the military motif, the adrenaline rush and the anticipation to get that next special weapon and build a powerhouse out of your atomic tank might make you lose track of time and miss appointments!

My final high score is the 21st in the picture below. I tried my best not to die, but I lost two lives in stupid oversights... 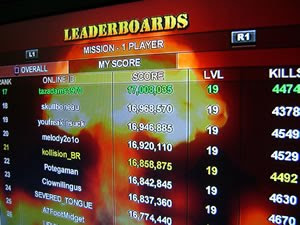