I always hear from naive onlookers that bullet hell shooters are "all the same". Besides, you always get comments such as "impossible", "too hard to be fun" and "stupid". There are two sad misconceptions here, in that (1) they are not the same at all and (2) they are definitely not impossible. The point I'm trying to make is that underneath all the fear Mars Matrix instills in eager and not-so-eager shmupping hearts lies an engaging and addictive shooter, one whose scoring system is an excellent example of how to infuse the genre with a tough yet flexible gameplay concept. It's a natural evolution of the ideas originally created in Giga Wing, and in my opinion it stands as a golden staple of bullet hell design.

The Dreamcast port of the arcade game is a perfect conversion that seems to have improved the original material by slightly rebalancing scoring details, excluding the possibility of counterstop and adding a control functionality that takes away the pressure of doing everything with just one button. Theoretically the game can still be played by using a single button, but on the Dreamcast the piercing cannon (a powerful burst of energy) is mapped to a different button with built-in autofire. To use it in the original control scheme you have to press the fire button once and wait a little bit to do it again, whereas tapping it will result in the regular main shot. Furthermore, holding down the button will activate the mosquito function, a vortex that makes you invincible and absorbs all incoming bullets. While active, the mosquito vortex empties an energy gauge and ends up in two different ways: either you hold the button until this gauge is depleted, triggering a GHB explosion (Gravity Hole Bomb), or you release the button before the gauge is depleted and cast away all absorbed bullets. The longer you hold down the button the longer it takes for the mosquito attack to be available again.

All attack basics are covered in the previous paragraph, but the best way to use them is a whole different story. It's okay to play the game just shooting, piercing and absorbing bullets, never mind all those shiny golden cubes that fall from defeated enemies and reflected bullets that hit them. However, these same cubes are the core aspect of scoring and, to a certain degree, survival. 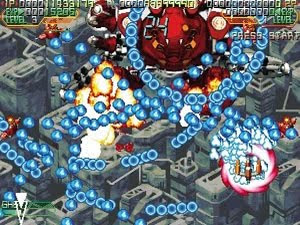 Going beyond the basic mechanics of shooting and dodging, focusing on golden cubes opens up a whole new world for Mars Matrix players. Each collected cube gives you a chaining window - shown by a dynamic bar below your score counter - and if you collect another cube before this window expires its value is added to the chain, which in turn keeps going with a new time window. All values from chained cubes add to the EXP counter, which is then used as a permanent multiplier to be applied over everything you're able to kill. Cubes come is several sizes and grant from 1 EXP to 50 EXP points, which equals 1 second to 8 seconds of chain time. Chain value is always displayed in tiny numbers for each cube you collect, and the challenge during most of the game is to keep the chain going to reach higher EXP values faster. After all, a valuable extra life is awarded with 100.000 EXP and ship/shot upgrades are only given upon reaching certain EXP values (up to level 8 with 1,6M EXP). Note: the only other extend is achieved by killing the mid-boss in the 4th stage.

EXP is so important in this game that after I while I just measured my performance by it instead of the actual score, which by all means is a consequence of the EXP value. There came a point, for instance, where I wouldn't be satisfied with less than 400.000 EXP by the end of the 1st stage. Mars Matrix is also special as a shooter because you don't die by colliding with enemies. You can fly over everything, from rocks to bosses, and you only die when hit by a bullet. Both available ships behave slightly different from each other: Mosquito 1 (orange) is slower but has a spread shot pattern, and Mosquito 2 (blue) is faster but comes with a straight shot. M1 is definitely better for survival, while M2 offers more possibilities for scoring as a compensation for being the hardest ship to control. Due to their different speeds, each one demands slightly different strategies for chaining.

What I love most about this game, especially in comparison with other danmaku titles, is how flexible the gameplay and the scoring system are. There's no defined route, every run can be made different from the other, there's always room for improvement. If I screw up during a chain it's not impossible to recover, even at the expense of losing some cubes. However, if I deviate just a little bit in a game like DoDonPachi I immediately lose my whole chain... The feeling of standing up against the odds in Mars Matrix is also amazingly conveyed by the overwhelming bullet count. In the last stage it's like all enemies are gateways to a pressurized parallel dimension, spewing bullets like uncontrollable fountains as if the universe was about to consume itself in chaos because the gates of hell were opened. It's a thing of beauty and it's mesmerizing just to watch someone playing it, let alone play it yourself.


Expert play: how to not break the cube chain during the whole 1st stage (MAME)
(courtesy of YouTube user apatia77)

There isn't really any rank in the game, it just gets increasingly brutal regardless of how many lives you lose. On the other hand, dying won't power down the ship at all, it will merely break any ongoing chain. The game does respond to the player's actions in a dynamic way, meaning when some enemies are killed very fast new ones will take their places. This can lead to lots of extra opportunities for chaining, including some precious cube fountains to considerably boost the EXP counter. Every stage has a unique feel to it, as well as secrets for scoring better. Lots of practice are needed in order to maximize the results from memorization, strategy and those split-second decisions required for higher chains and scores. As of the time of this writing I can get full chains in stages 1 and 5 and do some decent chaining in stages 2 and 4, but I totally suck in stage 3. Chaining in stage 6? Forget it!

My preferred method of playing the game on the Dreamcast is to use only two buttons: the auto-piercing cannon (R) and the normal shot (A). I don't need autofire for the normal shot (X) because when I need it I just tap A - most of the time A is just used to activate the mosquito vortex anyway. Besides, A overruns R, which overruns X, thus making X hard to use and ultimately useless.

Even though the graphics in Mars Matrix aren't what could be considered top notch, stage layouts are really diverse and provide the perfect arena for an outstanding shooting experience. Seeing those beautiful bullet patterns amidst the falling plethora of cubes is what pumps up the graphical qualities of the game, which almost never slows down. When I first started playing I wasn't really fond of the offbeat techno soundtrack, but as expected when you spend so much time with a game I grew to like it. The Dreamcast port is often praised for the inclusion of a great animated intro and a neat package of "extras". All of them have to be purchased, based on the amount of points you have scored. There are extra lives, more credits (eventually free play), extra modes, score attack for all levels (great for practice), sample expert gameplay for all levels (watch & learn!), art galleries and a handful of special tweaks to alter practically all gameplay mechanics. 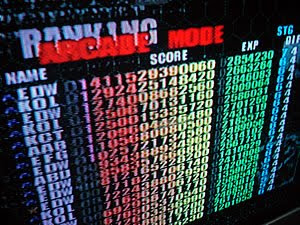