It feels really odd to admit this, but I was missing Psikyo. I still remember when I thought this would be an impossible idea. I've been playing the most diverse kinds of shmups, so I guess my missing their games tells a lot about how unique they are, in every possible sense of the word. As much as I was reluctant to comply, Psikyo does play a big part in shmup history. Very few companies developed titles with such a characteristic challenge, one that practically defines the bulk of their releases: a combination of in-your-face fast bullet patterns and undeniably cruel rank.

Getting back to Psikyo can be a little of a shock, but in this case it wasn't an all new adventure. Sengoku Blade, the second chapter in the Sengoku Ace series (it's known after all as Sengoku Ace Episode II), is also available on the Sega Saturn, and that one was already looped almost two years ago. On the Playstation 2, it appears in the Japanese combo disc that puts it together with first chapter Sengoku Ace or in a stand-alone European release renamed as Tengai. This is the name of one of the characters - the protagonist, maybe?

My appreciation and respect for Sengoku Blade increased this time around. The sprite work is great, the art design leaves nothing to be desired and the difficulty is quintessential Psikyo, whatever that means - everybody needs to try it out to know how it feels. I did learn how to cope with the rank in the 5th stage, which is something that gave me a hard time when I played the Saturn version. Or maybe I'm just a more experienced player than I was before. 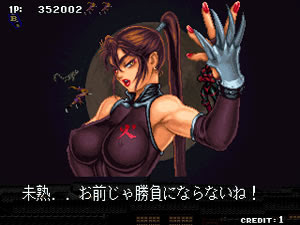 My aim when replaying Sengoku Blade on the PS2 was to best my Saturn high score. Initially, I tried not to use big-boobed Koyori/Miko, which I think suits me best, but I failed miserably. Shoumaru, the young ninja, has a weak shot and takes too long to deploy his charge attack. Tengai the monk and Hagane the robot have no reach on their charge shots. And the only good thing about Junis is her charge shot.

I mention charge shots a lot because I believe that playing Sengoku Blade seriously requires mastering the character's charge attack, beyond what you need to grasp with the good old method of regular shot + bombing. Doing well also relies heavily in memorization and detailed knowledge of enemy movement and bullet patterns (more than the usual share), especially when you beat the first set of three randomly selected stages and start the last four. Going through my old strategies with Koyori wasn't as easy as I had envisioned, but I did get to use a brand new gameplay technique, for me at least: while with all other characters the charge shot must be deployed one at a time, with Koyori you can spam the screen with it. This means that whenever the game lets you breathe, such as before boss fights or showdowns with stronger enemies, fire away as many of those slow bubble creatures as you want. It's a helpful way to easily get rid of a good deal of threats.

I still struggle a lot with the medal collecting, since the urge to time them all for maximum points (2.000 when taken in full size) often leads to hazardous conditions and horrible death. Trying to score higher also led me to the temptation of milking popcorn enemies while fighting bosses and large enemies, but I found out this must be done with caution. If they time out and flee/explode you get no score from them.

All facts considered, it's a shame Psikyo never ventured again into a full-fledged horizontal shooter in the same vein of Sengoku Blade (Sol Divide doesn't count). The company decided to concentrate its efforts into vertical fare such as the Strikers 1945 series. Much later a new episode in the Sengoku Ace series would arise for the PSP, but the result was nothing like it should've been since the real Psikyo was pretty much dead and buried by then.

If you ever managed to get there, then you know that Sengoku Blade's second loop is brutal. I tried to survive as much as I could but still wasn't able to proceed to stage 2-2. For the first loop, this time I chose the upper path in the last couple of stages, as opposed to the lower choice I made a couple of years before. And here's my new high score (difficulty 5 - NORMAL): 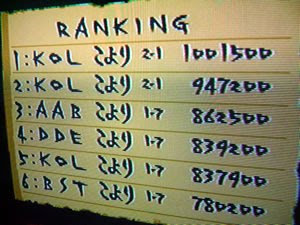