Master of Weapon is a no-brainer in any list of worst outings in the Mega Drive shmup library. That's a fact. Ask anyone, chances are pretty high someone with good knowledge of the genre will point it out as a flagship of horrid gameplay. My approach towards Master of Weapon has changed since the last time I played it a few years back, thanks to the fact that I recently beat the arcade-perfect PS2 version. This gave me a whole new mindset, which allowed me to deal with the most difficult parts of the Mega Drive port with less struggle - and also made me see how relatively easier it is when compared to the original game.

Trying to understand the reasoning for a developer to release obscure and unsuccessful titles in the console market is useless, but it's important to know that the Mega Drive is not to blame for the crappiness herein. After all, everything in the game is faithfully inherited from the arcade original. The overall cheesiness, all the annoying sound effects, every bit of the painstakingly harsh (though softened) gameplay. Taito's arcade and console history is full of glory, but Master of Weapon doesn't do anything to get itself included in this legacy. It seems to do the opposite, but that doesn't mean it's worthless. Standing up to the challenge requires a lot of tolerance to pain and frustration, and in order to enjoy this game you have to dig deep, I mean deep into its guts. 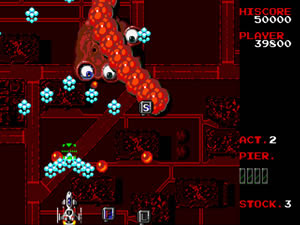 Damn, these aliens are ugly!

Pilot a lone spaceship against hordes of alien scum, and defeat a few crazy bosses along the way. Such a simple concept is also one of the strongest ideas about shmups in general, but the execution in Master of Weapon comes with some tricky details. First of all, the spaceship is so slow it almost hurts. The only way to make it maneuverable is by getting a few S icons brought by the green chips. The problem with this is that power-ups are completely random, and you might have to go through the first couple of acts/stages with absolutely no speed-ups. This also applies to the main weapon power-up, represented by the F icon (four Fs will maximize the spread of your main gun). Complementary to the main gun there's also a ground shot reminiscent of Xevious, with a third weapon acquired with the rest of the power-ups: P (pier, short for "piercing"), L (laser), W (wide), G (guide) and H (H-bomb). They are triggered by a different button and with the exception of the H-bomb they need to recharge for another blast. Lastly, the ship's exhaust can also damage enemies, and its reach is increased whenever you collect a speed-up icon.

For those who haven't played the game, the weapon variety seems actually decent. It almost justifies the title. But then there's the way power-ups are handled. Adding to their annoying random nature, power-ups come down very slowly in circles that take a big part of the screen, and by forcing players to avoid the bad ones (P, L or S for excessive speed-ups) they incur in extra stuff you have to dodge. There is a workaround for this, and I will mention it shortly. Other than the annoyance with power-ups, Master of Weapon is remarkable for the complete absence of divisions between stages. These are labeled as "acts", they blend into each other without notice and not all of them have bosses. If you count the number of bosses, for instance, the game would have only five stages instead of the nominal nine acts. Scrolling alternates between fast and slow and kind of diverts the attention from the bland graphics, which are rather simplified but succeed in establishing the offbeat atmosphere. The soundtrack and sound effects, on the other hand, are extremely close to the arcade version, with the same grating, ear-bleeding noises.

There are three points that I consider the most important ones for those who want to have a shot at this game:

Watching out for enemies coming from behind or from the sides is important to survive. Thankfully these don't come very often, so the memorizing aspect isn't that severe. The huge ship's hitbox rears its ugly head when you have to deal with boss attacks. Boss fights, in fact, are the most difficult parts of the game, and everything in between can be reduced to easy navigating with a bit of practice. Dying is only an option up until the second boss, because coming out of the third boss fight with only the pea shot makes it virtually impossible to go on. Extends are awarded with 30.000, 80.000 and then for every 100.000 points after that.

I can honestly say that my appreciation for Master of Weapon improved this time around. I think it's not just a matter of being pure crap, as it's widely known, but instead the game demands a very specific style of play in order to be enjoyed (besides masochism, of course). Moreover, being able to see the ending of bad/hated tough games on one credit seems more fulfilling than doing it on your regular beloved shmup. Right? Uhh... Okay, no.

The 1CC high score below was achieved in a no-miss run, on NORMAL. The starting difficulty is EASY, so remember to go to the options and switch it accordingly before playing. 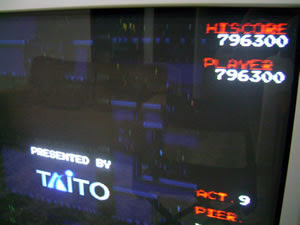