Space Harrier is probably one of the most classic and emblematic representatives of the rail shooter subgenre, alongside After Burner. This happens because Sega practically pioneered this arcade and video game branch. Space Harrier was the very first arcade game to use a special technology that allowed smooth pseudo 3D sprite scaling, thus making it possible to have a full fledged shooter where the player’s avatar flies into the screen against oncoming bullets and objects. Freedom of movement is still two-dimensional, but the gameplay is in a league of its own because it often scares people away due to its simplicity, a supposed lack of the need to dodge ("keep moving and you’ll always be safe") and the consequential idea of mindless shooting.

I for one always thought the game was fun, but also pretty damn hard. Just three lives and only one extend with 5 million points? Give me a break... However, a couple of weeks ago I was testing a few games for some friends and took the chance to see what the Space Harrier Complete Collection (volume 20 of the Sega Ages 2500 series) for the PS2 was all about. It’s a compilation that comes with the Master System and Mega Drive entries in the series and also the original arcade game (not to be confused with the stand-alone remake with polygon graphics). A relaxed credit in the arcade version allowed me to get roughly past the second bonus stage, and it just crossed my mind that beating the game wasn’t really out of bounds if I kept at it with the same mindset, playing Space Harrier as a fill-in diversion from other games and obligations. It eventually worked out well. No suffering, no grinding, just pure and relaxed fun, with the realization that there’s a little more than meets the eye when it comes down to this old classic. 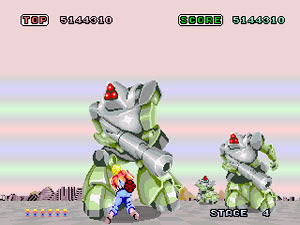 "Hmmm... How big and menacing you guys are... And those big, beautiful red eyes!!"

Checkerboard scrolling surfaces and objects coming fast towards the player must have been quite a vision back in 1985. That’s where the bulk of the design went to, given the fact that there’s probably few shooters, rail or not, with such a rudimentary gameplay. The character is able to move all around the screen and shoot a single plasma cannon that he carries under his arm. There are no power-ups of any kind. And that’s it. Drop that quarter/coin and be greeted with “welcome to the Fantasy Zone”, as the announcer puts it once the credit is started (an obvious nod to another very famous Sega franchise). Every time you die screaming (it’s one of the most painful deaths of any game ever) you hear a very familiar “get ready” before you get back on your knees – it’s the same sound that plays in Out Run, which was built upon the same scaling engine used in Space Harrier.

Fantasy zone is a suitable definition to the world and setting of this game. Surreal landscapes with a gorgeous palette of pastel colors, a wide variety of threats (clouds, jets, orbs, trees, mushrooms, maggots, insects, robots, spikes, stone faces, those goddamn PILLARS, one-eyed mammoths, etc.). There's absolutely no rest for our desperate hero, he runs and flies through 18 stages that are seamlessly connected to each other, and the only breathing room he gets is in the two bonus stages (5 and 12) where he boards the back of a flying creature that resembles Falkor from The Neverending Story. In the bonus stages you have to destroy as many trees and pillars as possible for more points. Trees? Yes, Space Harrier isn't exactly an environment-friendly shmup. The fact that the game takes place in an alien planet is no excuse, see James Cameron's Avatar.

It’s a bit unfair to point the finger at someone for labeling the gameplay as “mindless shooting”. At first sight that’s what it is, I gotta be honest. The first stage is a breeze, you just stumble on those bushes instead of dying and the boss gives you a perfect idea of what to expect from further bosses: with no exception, they’re all piss easy. Things start to go from “mindless” to “what the heck” when those freakin' PILLARS and larger creatures get in your way, demanding instant adaptation to the notion of proximity provided by the sprite scaling effect. The challenge is to correctly move around them, avoiding obstacles and taking down the enemies as fast as possible in order to reduce the number of aimed bullets. These can be pretty fast and take you off guard, especially when there's too much stuff appearing at once. As far as I can tell, there aren't any non-aimed bullets, but some bosses tend to shoot slower projectiles. Be careful, if you adhere to the usual strategy of circling around like crazy while shooting you'll probably rush into one of them.

Most people don't notice, but the Harrier's cannon shot has a mild attraction ability (I can't call it homing): it will also hit any enemy that's sufficiently close to its line of fire. Just pay attention and watch as the shot "bends" a little to make the kill.

Credits work differently in Space Harrier. Every time you press "triangle" and add a credit/coin, three lives are added to the player's stock, therefore you can never activate more than one credit in any given run for a legit 1CC. A minor gripe I have about the game concerns its original analog controls. I can't imagine why some people prefer to play with this analog thing, it keeps bringing the hero back to the center of the screen if you stop moving. It's just awful, and going by the superplay that's included in the disc you notice clearly that the superplayer does not use it. Fortunately, in Space Harrier Complete Collection you can select the control scheme at will, with natural autofire in the "square" button. Other features are the ability to record/replay your runs, an art/poster gallery and the music notes for the game's soundtrack. Speaking of which, only now I noticed there are only three tunes that get repeated throughout the whole game (not counting the brief boss themes). The most iconic and most used, of course, is the BGM for the first stage. No variety at all, but the music is cool enough and tends to grow on you.

There were no arcade sequels to Space Harrier. Sega decided to continue the series only in consoles, with Space Harrier II on the Mega Drive and Space Harrier 3D on the Master System. The SMS Space Harrier port completes the package in Space Harrier Complete Collection, which also has the Game Gear version as an easter egg. And let's not forget about the 3D remake for the PS2 simply titled Space Harrier (volume 4 of the Sega Ages 2500 series). Other home sources where you can play the original arcade game are on the Sega Saturn, a hidden arcade spot in Shenmue and the Nintendo Wii's Virtual Console. The 32X version is also supposed to be a valid choice, though it runs with a lower frame rate. 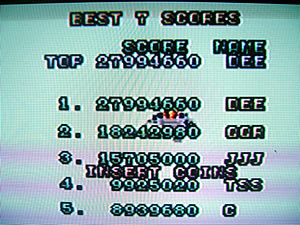