I firmly believe visual appeal is half the catch if you, as a developer, want to draw people to your game. Take Border Wars, for instance. When I saw what it was about I was hooked on the graphical concept alone. It’s a shooter that takes place on the sheets of a notebook (not the laptop synonym) with minimalist hand-made graphics amidst random annotations on calculus. How can you not be attracted to such a thing?

The bad news is that Border Wars is a bit rotten on the inside. It tries to be something different, but the attempts are poor and lack the polish to back the original idea. The game was obviously rushed out the door, and while on the surface it seems to be an odd but worthy entry into the genre there are several signs of laziness that pull it down a good notch.

Upon choosing to start a new game you’re given the chance to replace the default ship with a new one you can draw from scratch. The red rectangle defines the hitbox, but aside from that it’s possible to use the whole square to draw whatever comes to your mind. Once the game starts it seems as if the drawings in the page of the notebook come to life like a rustic cartoon, with colors used in a very stylish manner. The monochromatic tone is only left aside in the HUD and in tiny details such as bullets, items and weak points of bosses. You’re free to explore the scenery and touch walls, but don’t get crushed by them as the screen scrolls or you’ll die. Move with the left analog (no d-pad support), fire with button A, cycle special weapons with RB (R1) and use them with button B. Once the health bar is depleted you lose a life, and to recover health you can either take the random cross items released by enemies or buy health cells in-between stages. 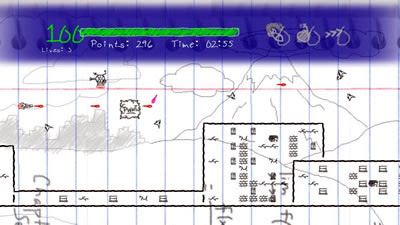 My aim is to get to the notebook cover!

With the exception of the last stage all levels are divided into three sections and a boss fight. During the intermissions a plethora of special items can be bought using the accumulated score, including upgrades on firepower, spread capability, shot ratio, speed, ship defense and collision protection, as well as ammo for the special weapons and breathers such as health recovery and extra lives. You can even redraw the spaceship before the next section begins. There’s no need to buy ammo for special weapons, there’s plenty of them to be taken during the actual gameplay: rockets (9 maximum), bombs and temporary invincibility (3 maximum each). Extra lives also appear very often so don’t mind getting the expensive offerings of the upgrade shop.

Border Wars plays decently enough on the eyes of an observer, but controlling the ship is a whole different story. For some strange reason the developer decided to restrict movement on the X axis, making it extremely difficult and awkward to dodge stuff until you’ve bought at least one speed upgrade. This is extremely annoying and there was absolutely no need to be done. The fact that most enemies fire horizontally isn’t an excuse, and the resulting effect is that the game almost plays like a fixed horizontal shooter at the beginning. Given the fact that it does restrict the player’s movement to a vertical line during boss fights, perhaps that was the original concept.

Other hints that point to a lazy fine tuning are the way you change from an underpowered wreck to an overpowered ship once you buy the spread shot and power it up, ditching the initial pew-pew shot sound. The game even seems to lower enemy count in the last couple of stages, peaking in difficulty at stage 3. There’s an upgrade (beam projectors) that adds absolutely nothing to the ship! Once you beat the game you unlock Arcade mode, which is just the same regular mode with 1-hit deaths. The problem with it is that it still keeps that health bar and everything related to health stuff, such as shop items, and the option to play this mode disappears from the selection screen when you log off. This means you need to go through the whole game every time if you want to try Arcade mode. And despite the automatic saving after a boss is defeated, starting a new game will override the save completely. You just can’t play a new game while keeping the save intact.

And the wars were ended by a superior force...
(courtesy of YouTube user KollisionBR)

I can live perfectly with everything I mentioned in the previous paragraphs. Regular readers know that I have played far worse shmups during the course of this blog. Maybe these negative aspects stood out so much for me because, on top of everything, Border Wars is bugged to the core. Nine out of ten times I got either Code 3 or Code 4 error messages while playing stage 3-2. These errors kick the player back to the dashboard, and in all online sources I’ve researched their causes point to bad programming. There’s even old info on a patch that would correct this but none seems to have been issued, and all webpages that link back to the developer are simply abandoned. The icing on the cake is the collection of messages that pop up when you lose a life, such as “maybe next time don't suck so much”. Every time I read this I felt like a retard because I was honestly trying to complete this goddamn game.

In a nutshell, everything about Border Wars is just sad because the game had potential, but it’s nothing more than a great idea gone terribly wrong. Only the music comes out unscathed, even though it's not anything special. Graphics are okay but they could've had a stronger contrast and used more black. I don’t know why there’s a timer for each stage, since it’s impossible to time out unless you want to milk your extra lives. Just for the record, I tried this timeout milking once and the game crashed again.

On the first day I got familiar with the weapon system and continued to see the end. On the second day I tried to get the 1CC, but the game wouldn’t let me because of the errors. On the third day I had my final attempt at doing it, but I was forced to use the save from the 3rd stage to complete the run because it was impossible to play a continuous credit (the crash even happened a few times during the 4th stage). The screenshot below was taken just before I killed the final pencil boss, having bought all the available useful upgrades - the score has to be wasted on buying them, or else you can’t advance much further. Be gone, indie crap, be gone. 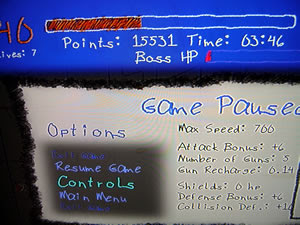