Everywhere you go online you hear lots of people shitting on CD Denjin and stating how inferior it is to PC Denjin, the previous Zonk shoooter released for the HuCard format. Allow me to start this text by saying that this is not really true. In some aspects the sequel loses to the original, in others it shows visible improvement and overall it's just as fun - if you've enjoyed the first one, of course. Hudson Soft futuristic mascot Zonk returns to do more justice against the wacky enemies led by his arch-enemy, which this time joins forces with a fellow who's got a big brain.

On the Turbografx-16 the game was aptly baptized as Super Air Zonk. The subtitle Rockabilly Paradise gives away the musical emphasis of the excellent soundtrack, which serves as a perfect backdrop to the action. The compositions themselves are as engaging as they were in the first game, albeit with a different flavor and with the technical advantages of the CD format. Zonk's iconic sunglasses are back and his attitude hasn't changed. His head is still big and his verve is still cool. Enemies and environments are as crazy as ever, maybe even more influenced by Parodius because this time there's this recurring enemy with a buckethead that seems to be the hardworker pawn of the bad guys (remember the penguins in Parodius?). Even though the settings and the whole feel of the game remain the same, gameplay was changed slightly towards a more straightforward and simpler approach. 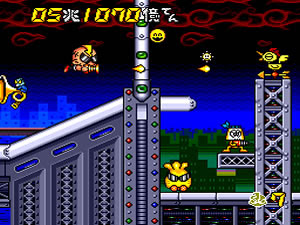 Look out, punks, I'm gonna drop a bomb on your filthy heads!

The initial four stages can be played in any order (sea, river, factory, TV), after that there are three more stages to go through. Zonk starts the game with his weapon in the second power level. If he gets hit the weapon will degrade to its lowest level (weak lightning), with the next hit meaning a lost life. Grabbing a meat on a bone will upgrade one power level, also giving him one more hit to sustain in the case of damage. Initially there are only three power levels, but two more are acquired when you defeat the bosses from stages 5 and 6. The meat on a bone appears when you touch one of those static purple heads with dark shades. All heads contain something useful: yellow heads (the most common) release one smiley face, purple heads contain the meat on a bone, green heads generate a quick shower of smiley faces, blue heads release an extra life and blinking heads give way to a baby bottle that shrinks the character and turns him into mini-Zonk until a new baby bottle is collected. Upon shooting at these heads they change their color, so from the initial yellow ones you can always get a meat on a bone. However, if you hit them too much you'll lose their contents as they turn into a small spider.

Here's where the most important of the scoring techniques lies: any meat on a bone you collect when you're maxed out in power is worth 1.000 points. The same happens to extra lives once you already have 9 lives in stock. Therefore the main rule is to not get hit and to aim for purple and blue heads only. Another source of extra lives is the smiley face left by almost all destroyed enemies. For each 100 smiley faces collected Zonk wins an extra life - occasionally a bigger smiley face will appear, which is worth 10 small ones (the number of current smiley faces collected can be checked by pausing the game). Watch out for when the boss dies, he will turn into a popping fountain of power-ups and smiley faces for a few seconds!

Gameplay is completed by the escort power-ups that upgrade Zonk to a powerful cyborg. Like in the original game Zonk is still able to acquire escorts and merge with them, but the mechanics have changed in the sequel. A fixed escort is assigned to each level, so there's no more automatic or manual selection of helpers. You can still play the game without them, it's just a matter of not freeing the escorts from their captivity when they appear within the stage (most of the time it's quite hard to miss them, but I did miss my helper in stage 6 once). The lack of randomness and escort variety might be a letdown, but the way they work is nothing short of an improvement. With button II you fire the regular shot, and by pressing button I you can set the use of the escort in three different ways: as a cyborg (it will merge with Zonk), as an option (it will follow Zonk around) or as a bouncing weapon (the escort will bounce around the screen). Once activated the cyborgs aren't lost even if you lose a life, so they will remain with Zonk until the boss is defeated. Mini-Zonk is also a lot more useful than before because it does not affect regular fire nor does it replace the cyborg's firepower.

Bombing in CD Denjin is also implemented with improvement, since it will charge automatically just by regular shooting. When Zonk's life count avatar blinks you know the bomb is ready to go, so all you need to do is release the shot button for a moment. Bombing does lots of damage and is excellent to take out enemies behind walls, as well as clear the screen when it gets too crowded. The rear burner that fires automatically whenever an enemy passes behind Zonk is back and it's also been improved. Both the bombs and the burning farts are some of the prime examples that the gameplay was, in fact, enhanced over the slightly convoluted controls of the first chapter.

Even though the game is easy to the point of allowing a 1CC in the first try if you play carefully enough, it's still heaps of fun with its relaxed pace and great music. It's almost of the same length as the PC Denjin HuCard, but a lot easier and also more friendly to pick up and play. The lack of parallax in the majority of the graphics might be a letdown for some people, but they're so colorful and there's so much going on at times that it becomes irrelevant. And a minor bonus of the sequel is that the slowdown is completely gone.

All texts in the Japanese version of the game are, well, in Japanese. Upon pressing RUN at the start screen the first choice in the upper line corresponds to the NORMAL difficulty (second choice to the right is HARD). The lower line is a sound test. Thankfully there are no other critical choices to make, so brace yourself for a laid back, joyful ride with Zonk. Never mind the bashing from fanboys of the HuCard original, this is a great and honorable follow-up. My final result on NORMAL is shown below, just after dispatching the final boss (sadly there's no buffering, that's the last time you'll see your score). 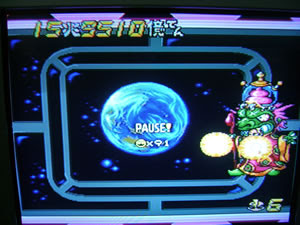