Few shmups have reached such a legendary status as R-Type, a game that's considered both a staple of the genre as well as one of the most punishing classic titles ever. Newer generations of gamers might know it by name but are in most cases unaware of the truth behind its status. Thankfully, in 2009 owners of the Xbox 360 received a great gift in the form of R-Type Dimensions, a compilation of R-Type and R-Type II that updates both of them to the HD era while including a few aspects that try to avoid the anger of those who aren't initiated in the matters of checkpoint punishment. I'm still astonished to see so many young people disgusted by the fact that they're thrown back in the stage powerless once they die. Developer Tozai was sensitive enough towards these people and included an extra mode called Infinite, where lives are unlimited and you're respawned instantly once you die. Those who want to try the real deal should stick to Classic mode.

Graphical upgrades in high definition are the main reasons to get R-Type Dimensions. Everything received and HD/3D repaint that in some places went even further, adding details and background objects where there were none. The coolest thing about it is that graphics can be switched between the old sprite-based version and the new 3D renditions on the fly, at the press of a single button. Screen size can be set to widescreen or the original 4:3 aspect ratio, with an additional crazy 3D option that tilts the playfield horizontally. Retro 8-bit filter effects can also be applied to the 3D option, and another screen alternative allows playing the 2D game inside an arcade cabinet - just like the crazy 3D setting, it's more awkward than actually useful. All these settings can be played on Infinite or Classic gameplay modes and switched between 2D and 3D at will while playing. It's really impressive.

My choice to play R-Type on this XBLA compilation was to stick to the original 4:3 screen size but use the new 3D graphics from start to finish on Classic mode. A whole new graphical experience, let's say. Musically the experience remains the same since the soundtrack received no upgrade at all, unlike the great port for the PC Engine CD. 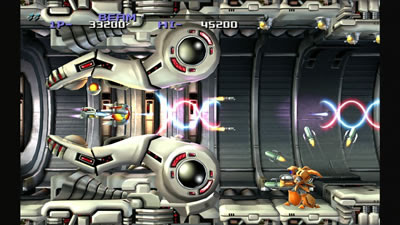 The glow of the force pod and the weapons can be seen all over the place!

Bydo is the name of the enemy race. Your mission is to blast off and strike them into oblivion. Board the R-9 arrowhead spaceship and prepare for 8 stages of increasingly tougher grounds. To make the journey possible an exquisite array of power-ups is available. While the bare ship can fire both single and charged shots, it's only when the force pod is obtained that its real power can be unleashed. A force pod is an invincible energy sphere that can be docked in front and in the back of the ship, damaging enemies by contact, providing protection against regular bullets and allowing the use of three different weapon types: a wave laser (red), a bouncing three-way laser (blue) and crawling energy snakes (yellow). It takes a first weapon power-up to activate the force pod, and two more to max out its firepower.

Additional items consist of the speed-up (at least one is essential to make the game playable), the bits (small semi-spheres that serve as options above and below the ship) and missiles (two guided missiles fired at a fixed low rate).

Successfully playing R-Type depends on how efficiently you use the force pod and the weapon items found along the way. Trial-and-error and memorizing are absolutely needed, and along the years this characteristic created a strong definition for games like this: memorizer. It's suitable but actually unfair, every video game is a memorizer to some extent. The reason it seems perfect for R-Type is the game's brutal difficulty: dying in the last couple of stages is reason enough to reset, for example. One of the worst cases of failure is to miss the last boss's mouth: he can only be hit if you manage to throw the force pod inside its mouth at the exact moment he opens it. Missing leads to certain death because the situation gets critical after the boss expels more of those annoying blue stars.

Is suffering fun? Of course it is! I'd say a little bit of suffering is needed to make victory sweeter. If you want to find your limit for suffering don't wait any longer, go play R-Type.

Blast off and strike the evil Bydo empire in Japanese!
(courtesy of YouTube user teruklsf)

R-Type Dimensions is a great package, there's no doubt about it. However, it comes with a few functional constraints that might let some people down. One of the most notable is the absence of difficulty settings (Infinite mode doesn't count). The other one is the impossibility to map the buttons in the controller. I was lucky to find them comfortable, with autofire on RT, regular fire on A, pod launch on X and 2D/3D switch on Y or RB. It seems they tailored them for me, yay! What I absolutely didn't like is that you can't play the game if you don't have an Internet connection. It's total bullshit because every other XBLA game I played so far allows that.

Extra features include the abovementioned graphic options, local or online co-operative play, extensive statistics for the whole package (meaning aggregating both R-Type and R-Type II) and leaderboard tables for every game mode.

R-Type on the XBLA is exactly like the arcade, but some tense moments while playing made me suspicious about tiny differences. Maybe it's psychological, but at one point I was unable to get past the fifth boss, Bellmite. I couldn't do it for days, in every credit he would move around like crazy and eventually corner me to a painful death (I use only one speed-up during the game, so that made it a bit more difficult). I only got through after I gave up trying to milk the segments from the snakes that move around in stage 5, holding the autofire button all the time and never breaking all of them in the middle. It could be a coincidence, but after I did it Bellmite was much less aggressive, which allowed me to go on and beat the first loop unscathed, surviving until stage 2-4 (stage 12). 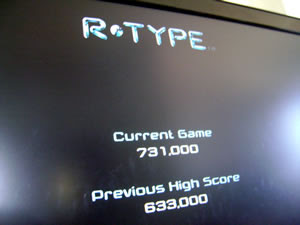