Originally a mini-game included in a Japanese PC visual novel called Musumaker, Let's Go! Burunyanman was beefed up by developer DigitalCute into a full-blown shooter. Heavily bent into a risqué anime style, the Portable version for the PSP is probably quite tame when compared with its PC counterpart, which bears the Hardcore!! subtitle and aims at adults with its +18 eroge rating. In the case of the PSP, character design is incredibly cute yet daring at the same time, maybe inappropriate to some but never explicit in any way. It’s definitely reminiscent of Parodius in the way it looks, but it plays with a mild bullet hell atmosphere that’s actually very attractive gameplaywise, especially for beginners.

Attractiveness relates to the ease of entry into the game mechanics, which involves focused firepower, grazing and medal collecting, three well-known staples in the danmaku subgenre. Bullet density, however, does not get taxing until much later in the game. Burunyanman slowly builds up steam by luring the player with a few easygoing levels, then starts demanding more from our dodging abilities as soon as the most visually audacious boss appears (the chick with the laser-firing crotch). It’s a well designed difficulty slope, and one that benefits from the presence of a proper practice mode that allows training in any stage that’s been already reached in the regular game. The only problem is that the game is entirely in Japanese, from the menus to all the spoken/written dialogue, so if you somehow care for the storyline you’d better understand those kanji for great justice.

Following one of the most catchy intros I’ve ever seen in any anime-based shooter (it’s really awesome), the first option in the start screen of Let's Go! Burunyanman Portable sends you directly into the game. Type your Japanese name, choose the difficulty level and select one of three cat-girl characters: Burunyan (slowest + spread pattern), Sukunyan (fastest + very wide spread pattern) or Maynyan (middle speed + straight pattern). All of them are rather balanced in firepower, so the choice criteria falls pretty much over movement speed. Somehow I adapted better to Suku, the other girls are too slow for my taste. They’re all invested in a fight against rat enemies, and this old rivalry is what seems to drive the story from start to finish. Deadly spirals in the cemetery

All characters are able to use a normal shot (∆), a hold shot (○) and a bomb (×). While normal shot differs for all of them, they all share the same hold shot, a focused attack that reduces the character speed while deploying a thick laser beam (actually tapping hold shot results in normal shot). Whenever you get close to an enemy bullet (grazing) the action slows down and firepower gets boosted to new levels: normal shot is upgraded to an "adrenergic" shot and the laser from hold shot is thickened even further. The act of grazing also discloses the character's hitbox (the mouth in a heart-shaped form) and allows for better inch-dodging. Bombs make the player invincible, damage every on-screen enemy and generate coins at random in small explosions. Coins, by the way, are released by every single defeated enemy and head directly to the character’s hitbox in a straight line. If you’re close enough to them they are absorbed and increase in value from 200 to 2.000 points in steps of 2. However, if you lose at least one coin this value is reset to 200 and you have to build it up all over again. This is the bane of the scoring system, so a score-driven player will always strive to fully "chain" a stage without any coin loss.

As a rule of thumb, the larger the enemy the more coins you get from its demise. Large explosions convert all nearby bullets in coins, and whenever a boss form is defeated all bullets will turn into coins. Bosses are all gigantic and have three forms each, with the exception of the fifth karaoke boss and her single health bar (much like the karaoke girl-boss in the arrange mode of The Game Paradise). Every form of a boss has a specific behavior/pattern, and the first one generally enters the screen throwing stuff all around as if coming from below the ground: buildings, knives (!), houses, trees and tombstones are some of the things thrown at the player. Mid-bosses are smaller and closer to the character’s size, sometimes you can’t even see them well because they’re engulfed by the glow from the focused laser.

Given the nature of how weaponry works, the absence of power-ups in the game comes as no surprise. You do get options though, in the form of up to two cats that follow you around in a trailing fashion (normal shot) or in a character-specific formation (hold shot). Option cats, extra bombs and extra lives, as well as cat food cans for a few extra points, are released by killing specific enemies. All items keep bouncing around the edges of the screen, so there’s no need to rush to get them. Once the stage is over you get a few bonuses based on the amount of lives, bombs and options you’re currently carrying. However, these bonuses are kinda irrelevant when compared to the rush you get from coin chaining. If you want you’re better off detonating those bombs for the extra coins rather than keeping them for any final bonus.

What makes Let's Go! Burunyanman a neat little title is the lighthearted tone of the game and the juxtaposing intensity you can extract from it when playing for score. Give it some time, understand how it works and soon enough you’re leaving enemies survive only to graze their bullets for more coins and more power to defeat tough enemies (such as the cute girl who throws candies in stage 5). Bosses do not time out and some of them offer lots of opportunities for extensive milking, but be warned that they start firing different patterns after a while. When things get out of hand bombing is definitely needed, after all the game does get harder than what it shows in its early levels. Fan service reaches its peak when bombing because you get six successive special background images of the character for six successive bombs used if you don’t die. Note: the later the bomb the more risqué the image.

Fact: high quality cartoony animation abounds in Burunyanman. All cat heroines move their tiny legs when flying, bosses attack with varying degrees of liberty across the screen and something’s almost always happening in the tiled backgrounds. Tiled backgrounds aren’t as bad as it seems here because everything’s very colorful, parallax is all over the place and there’s a lot going on at all times (graphical themes include highway, beach, cemetery, flower fields, an amusement park, volcano, rainy forest/above the clouds and rat city). For a shooter with such good animation, the soundtrack definitely matches the overall cuteness of the package. Although uneven, it’s really outstanding at certain points – the opening theme is awesome, some boss themes are great and most songs with singing are unexpectedly fitting. The gallery of sound effects is equally decent, with several different in-game voices alongside the impressive amount of dialogue that takes place during character interactions (skip them all by pressing ×).

In quite an original twist, once the game is beaten the player can destroy the end credits for more points as they scroll up. Beware though, those kanji start shooting after a while and can kill you (the first time I got there I died). Since this credits section unfolds like a regular stage and you can die there, I guess it's okay to consider that Let's Go! Burunyanman Portable has actually 9 stages of fun horizontal shooting action. Beating the game with different characters unlocks various extras in the album and replay galleries, as well as a series of short animations which unfortunately are totally in Japanese. The three tutorials are also rendered useless if you can't understand the language, but at least the option to remap controls is a little easier to find and use.

The limited edition of the game comes in a DVD-sized package that also includes a soundtrack CD, a booklet and fan cards. I even received a large poster showing Burunyan and Sukunyan taking a feline bath! My final 1CC result with Sukunyan is below, playing on Normal. 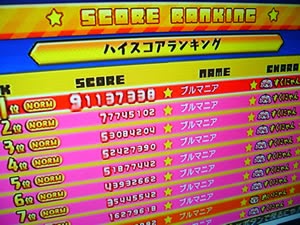