Last of Mega Soft’s original unlicensed games released for the NES, Sea of Dreamland’s most common (but still rare) incarnation is the one that goes by the name La Gran Aventura Submarina, which came out in Spain and translates to something like “The Great Underwater Adventure”. However, if you’re familiar with Mega Soft and other related obscure aliases such as NTDEC and Caltron, you’ll certainly assume and conclude that there’s nothing great or adventurous about this game at all. In fact, from what I’ve seen so far it might just be their worst effort.

A young seahorse named Abby is in search of Silas, the bad “uncle” of the sea. Silas is the one who stole the mirror of hope from Dreamland, thus draining the joy and warmth from its waters. The strangest thing about this, according to the instructions written in the back of the box, is that Abby is supposed to be a male seahorse. I understand that people tend to re-gender many names (Cameron, Alex, Taylor, etc.), but Abby? It doesn’t really matter though, because even an infant seahorse could handle the hazards found in the sea of Dreamland (no, I’m not implying women are less competent than men). The first stage is the only one capable of giving trouble to unaware players – once a few power-ups are taken you practically enter powerhouse mode, gliding through the rest of the game with no trouble besides the risk of falling asleep. 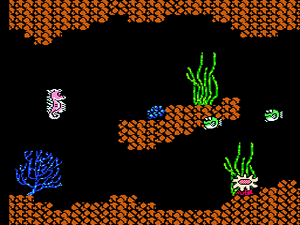 I'm really playing this... Am I dreaming?

Abby is able to shoot (tap B), fire a charge shot (hold and release B) and attack with his tail (A). The charge shot is cumbersome to use and definitely not as effective as tapping, especially with an upgraded shot (a turbo controller is recommended to get proper autofire). The tail attack is just a short melee move directed downwards, good for those crabs and also for blocking slow bullets. The problem is that you can't use it together with the regular shot. As you get hit Abby’s color changes from vivid green (maximum health) to white (lowest health), and when in this condition any further hit means death. Don’t bother trying to check your life stock or your score, the only moments you’ll be able to see them is when you complete a level or when you get the GAME OVER. During gameplay the START button is merely for pausing, and a notable quirk about pausing in Sea of Dreamland is that it comes with a slight delay. In all these years of video gaming this is the first time I see a delayed pause function.

Anyway, this game is very limited in many ways. Five or six different sea creatures compose the whole enemy gallery: a crab, three types of regular fish, a stonefish, a pink jellyfish and a static seaflower. Stages change from a deep blue ocean to backgrounds with green murky algae, and then a few caves split in the middle by rock formations. If only the game had more enemy bullets coming your way or if later levels actually increased the challenge somehow the game wouldn’t be such a yawning experience. Bosses are wimps and get increasingly easier... I was so powered up I didn’t see the shark in stage 4 fire a single bullet against me! And Silas, the ultimate villain in Dreamland? Nothing but a sorry joke of a three-headed dragon who can’t see an inch up or down!

It takes just three power-ups (P) to put Abby in an overpowered condition. With six Ps you’re shooting almost at all directions with a very effective frontal wave cannon. Power-ups are released by clamshells on ground level, just like the other items in the game: LIFE (partial health recovery), S (speed-up), 1UP (extra life) and a lightning bolt (invincibility). Sea of Dreamland is extremely unbalanced with item distribution, clear examples are the first speed-up appearing only halfway the second stage and the plethora of health recovery and extra lives unnecessarily laid out in the last couple of levels. Why make such an easy game even easier, I wonder? Was the defunct NES bound only for kids back in 1992?

As far as unlicensed shooters go, Sea of Dreamland can be considered bottom-of-the-barrel lackluster material. Mega Soft's own Magic Carpet 1001 and War in the Gulf are also poor but more accomplished in their simplicity. The music in Dreamland comes out as particularly dreadful, but only when you're actively shooting. Refrain from pressing those buttons and notice how the sacrificed layer of music resurfaces. Even though I've seen this happen before, here the audio loss is really heavy and makes a pitiful soundtrack even more pathetic.

Sealing the whole package of mediocrity, once Silas is defeated you're simply treated with the GAME OVER screen. There is no fanfare for Abby's heroic duties, not even a "congraturation" message to reward the player's brave enterprise. I beat the game on a single life and here's what I got in the end: 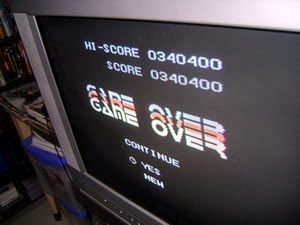