Time for another quickie!

As usual, Pixelosity came out in 2011 amidst a glut of new indie games that poured into the online system of the Xbox 360. A horizontal shooter of simplistic design, it didn’t pretend to offer anything more than a take on what a blocky Atari 2600 shmup would look like had it been given more memory and processing horsepower. The in-your-face mechanics and the wave-after-wave scheme brings it close to a caravan styled shooter, one that entices and captivates but ultimately ends in a lower tone, failing to live up to its sympathetic concept.

Everything in the game is big, represented in strong, flat colors that change every now and then. Your ship is a single pointy vessel that leaves behind a short rainbow trail and fires a single stream of blocky bullets against equally blocky enemy ships. At first these enemies are shy at shooting back at you, an aspect of the gameplay that gets progressively reversed as you reach the final objective of this abstract romp, which is beating wave/stage number 7. Collisions distribute showers of blocky sparks all around the screen, creating a visual feast that tends to get straining on the eyes after a while. Pixelosity is definitely an apt title. 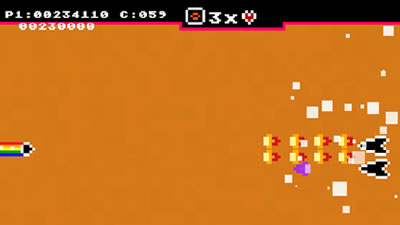 It looks much better when it's moving

There’s not much in the way of tweaks in the game, much like most of the XBLIG offerings. Choose your approach to music, sound effects and controller vibration and off you go (by approach I mean ON and OFF). Shoot with button A and travel inside an endless horizontal tunnel blasting opponents that come in straight lines and have little in the way of variation, be it in the enemy gallery or in their limited attack range. You won’t see walls, aleatory movement patterns, fancy graphic effects, aggressive spread patterns or even proper bosses. What little there is of change is in the randomness of enemy spawning position and formations (in-line, lateral, mixed) and in the sparse appearance of spinning drones or larger/stronger versions of regular zakos. These often resemble aliens from Space Invaders.

Items are dropped at random by some enemies or waves and have the following meanings:
All items are mutually exclusive, so you can’t have a spread gun with increased firing rate or keep a bomb while having the spread gun. Note that the current active item is shown beside the life counter, and that the only one that doesn’t fade is the bomb since it can be used any time at the player’s mercy. Whenever a certain amount of enemies in a stage is destroyed you enter a brief bonus area with opponents that don’t shoot, and if you kill them all an extra life is awarded (max life count is 5 though). Pulling this off during the first couple of levels is easy, after that it becomes a lot more difficult due to the lack of firepower. This is also where the game balance starts to suffer.

The fun in Pixelosity is at its best when you’re dodging series of bullets at different heights, regardless of their speed. There’s genuine rush to the twitchy action, never mind the enemies that go by because you can’t handle them all. Unfortunately, halfway into the game it becomes clear that lines and lines of aggressive zakos shooting almost non-stop cannot be fully destroyed without incurring in inadmissible frontal risk. Later on the game speeds down a little with slower bullets but much higher enemy density, giving you a near-danmaku feeling. And then it’s back to the underpowered fight before the end, which cuts the game abruptly as if you had a game over. One of the most unsatisfying ways I’ve ever seen of finishing a credit, honestly.

In between the slow start, the cool middle stuffing and the brisk ending lies a simple but effective scoring system: the more you kill the higher you score; die and watch the combo counter and the scoring possibilities restart from zero. It’s easy to notice how to extract the most out of this system, even if luck plays a little role in the overall experience. During the game’s second half, for example, bombs disappear completely. So much for the Zero Wing reference, I guess. Sometimes a little balloon with an X appears above the ship, and while it seems to have a relation to the bomb item it actually doesn’t. Dying happens with little flair, with the same animation used in regular pixelly explosions and no breathing room at all in the next life. The result can be several deaths in a row if you’re not focused enough.

The game crashed on me a few times and sent me back to the console’s dashboard, but thankfully these bugs only happened at the end of a credit with scores being duly preserved. If you watch the separate credits you’ll see the developer recommends using the Konami code in the game - the only thing it does is change the sprite of the ship to that of a cat. A blocky cat. Ever wanted to play a shmup as a cat leaving behind a rainbow trail? Then Pixelosity is for you.

My highest score below was achieved in a no-miss run. 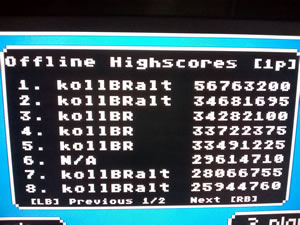