It must have been great to be a fan of Sega back in the 80s if you were a regular arcadegoer. There were many companies working their way up in the development of their games and series regardless of inherent success or critics approval, but Sega was truly unique in how they were able to innovate and create completely fresh titles. Titles inspired by previous efforts, it's true, but nonetheless the most famous Sega arcade games were an instant invitation to awesomeness. Fantasy Zone, for example, wasn't like anything that came before it. The core of the gameplay relates to Defender, but it goes beyond the horizontal shooter formula and delivers a completely unexpected blast of pure fun.

Today it's easy to dismiss Fantasy Zone as a foolish or childish little title without much of an emphasis on shooting or action. Most of the designs for enemies and levels comes off as fluffly, soft, not worthy of one's attention when there are so many shooters out there that fill the screen with thick lasers and insurmountable bullet curtains. All it takes, however, is one credit. One single credit, and the odds are that you'll be hooked right there and then. This game sucks you into it like quicksand, and for a while all you might think about is destroying all those generators and beating those colorful bosses while collecting shiny gold coins. 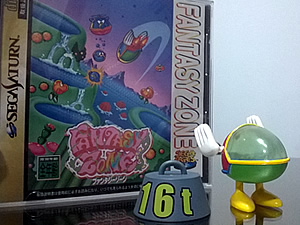 An oval ship called Opa-Opa is the hero of the game. He fires a main shot and drops ground bombs. The main objective in each level is to take down all generators that spawn enemies, facing the stage boss right afterwards. It's possible to fly right/left and to control the scrolling speed by doing it (you can even stop the scrolling by "landing"). Since these levels work as vertical cylinders, you'll eventually come back to the starting point if you keep flying in the same direction. A small map in the lower part of the screen shows the locations of the ten generators in a level and which ones have already been destroyed. When the last generator goes down remaining enemies try to flee and the music changes to announce the boss entry. This is the only moment (boss fights 1 to 7) where Opa-Opa will be locked facing the right side of the screen.

The first thing you want to do as soon as the Shop red balloon appears is touch it and buy the necessary upgrades to survive. In order to buy you need money, which comes from the coins you collect from defeated enemies. Mandatory items to get include one of the speed-up upgrades and twin missiles. These particular items are permanent and only disappear when you die, while most of the others last only for 20 seconds, as indicated by the status bar on the top right of the screen. Part of the learning fun comes from testing these upgrades and deciding when it's better to use the temporary ones. However, one can always try to play the game without them or without ever entering the shop, a special challenge certainly not designed for the weak. And if you're stuffed with items you might get a Sel balloon instead of the shop, an alternative that allows you only to select between your inventory of items.

Attention to detail is one of the reasons I like Fantasy Zone so much. Each enemy has its particular behavior, which is also heavily randomized by the game itself and your movement as you seek those evil generators. Besides, each generator has its own damage indicator and its own particular way of "breeding". All bosses have specific behaviors and ways of attack, in one of the most diverse and fun boss galleries I've ever seen in any horizontal shmup. The last stage is different in that you need to defeat all previous bosses again before facing a giant version of yourself, but note that boss rematches are harder and your firepower isn't locked to the right anymore.

Fantasy Zone's unforgettable soundtrack is tailor-made to match the pastel colors, helping to breathe  an extraordinary amount of lighthearted ambience into the game design. Be aware though that behind this fluffiness lies a rather intricate challenge. Looking back when I first tried the game, I was briefly shocked upon dying my first death. The death animation of this game is cruel: there's a split-second freeze and Opa-Opa explodes in a burst of blue particles (other games do this quick-freeze as well, e.g. Under Defeat). As usual, avoiding death requires practice, but given the random nature of the game I'd say it also requires a greater deal of focus. More often than not I saw great credits go down the drain because I got sloppy. Dying against certain bosses can be really bad, since that's the only point in a stage where the Shop will not appear at all. Shops appear every time you die during the level, so that you can at least recover your speed right away...

It's possible to buy extra lives in the shop, but each further one will cost more (5K, 20K, 50K, 100K). By the way, all items and weapons inflate in price the more you purchase them. Using the money to survive and recover from losses is perfectly fine, but it isn't good at all if you're trying to play for high scores. These are only applicable if you complete the game because everything you have in reserve is converted into a BIG bonus. Each life is worth one million points, while the amount of gold gets multiplied by 10. Therefore the more you spend and the more you die the less you get as a reward in the end.

What I found kinda puzzling is that the game lets you input your initials for a high score before the second loop starts, registering another score when you die in the second loop. Another tricky aspect of the loop is that since your lives and money are converted into bonuses you'll start the second round with no lives in reserve.

The Saturn port of Fantasy Zone released as part of the Sega Ages collection is arcade-perfect. It was the first one to offer the arcade experience at home, but the version for the Playstation 2 is also a good alternative. The Saturn game allows lots of tweaks, most of them unlocked with a few simple tricks. The only one that mattered for me is rapid fire, and to unlock it all you have to do is play a token credit while holding down the fire button: the result is that you can then choose between ten options for "auto rapid". The player can also record, load and save replays to a back-up cartridge with the Trace function, along with a few rearranged versions of the soundtrack including a variation with female vocals for the song of the first stage (unfortunately the rearranged music can't be selected for regular runs). It's also possible to choose betwen Japan or US versions of the game - the difference is that the US version has less enemies and is therefore easier. Each version comes with its own high score boards, which are properly saved for great justice.

My gameplay strategy was very aggressive. Initial power-ups I purchased were the jet engine ($1.000) and the twin bombs ($100). Then I would get the laser beam in stage 3 (much stronger than the wide beam), another laser beam in stage 5, wide shots in stages 6 and 7 (best temporary weapon in the game), one of those lovely 16t heavy bombs to care care of all turrets from KobaBeach (3rd boss) in the boss rush and wide shot again against Ida 2 (7th boss) if I end up dying. For the final boss I'd reserve at least two 16t heavy bombs. In the highest score below I played the Japan version on Normal/Medium, ending the credit in stage 2-3 (round 11) with auto rapid set to 10 shots/second.