Thunder Force III on the Sega Saturn! In my case, through an S-video connection that surprisingly doesn’t make the game any more gorgeous than it is on a good old Mega Drive. Is that supposed to be bad, some people might wonder? Of course not! That just confirms how much of a 16-bit marvel this game actually is. Make no mistake, my friends: for those who lived that era to the fullest Thunder Force III was pure bliss. It was the bee’s knees. We were kids, gaming was naively fun and Technosoft was then a young god on the rise.

The success on the Mega Drive was such that years later a compilation titled Thunder Force Gold Pack 1 brought both Thunder Force II and Thunder Force III to Sega’s 32-bit platform, for the joy of nostalgia buffs everywhere. It’s been 20 years since this disc’s release, and here I am savoring the Saturn port for the first time. Blame it on a great bunch of shmupping peers who never cease to gleefully push me to play games I wouldn’t dare for the most different reasons. And the most interesting aspect in this case is that we were supposed to play it on Normal difficulty, something I never really cared about since I always went straight to Mania (Very Hard).

Even though this game is known for wowing players and onlookers alike, it does have an inherent problem that might let many people down: it's just too darn easy in its default setting. Of course we all die here and there when we start to play it because of instant walls crushing you from the sides or enemies zapping quickly into the screen. However, Thunder Force III becomes a cakewalk once you memorize these obstacles, power up the ship and figure out the importance of the hunter (H) and sever (red S) upgrades. On top of that you get one of the most benevolent extend schemes of the genre, which grants extra lives like candy both by scoring and by collecting 1UP items.

For example, it's hard for evil final boss Orn to stand a chance when you get to him with more than 10 lives in reserve because even if you die plenty it's still possible to pound him away. The most logical challenge factor here, obviously, is to beat the game while losing the miminum amount of lives since each one will be worth 10.000 points in the end. Remaining credits are a no-brainer since you'll be conquering a 1CC, with a useless ×1 multiplier for playing on Normal difficulty. And then maximizing score comes down to killing everything in sight and milking the little drones or missiles you see coming out of hatches/enemies.

In order to try and boost my score this time around I started the game on planet Haides. By doing that you come out of the first level with the hunter weapon and a shield, resources that help greatly in scoring (you won't get those by starting on default planet Hydra). Shield is self-explanatory, but hunter is particularly useful because it will home on anything, including hidden items that must be shot at to be revealed. I don't want to repeat myself too much, so for further info on gameplay details please refer to the text I wrote on the Mega Drive original. 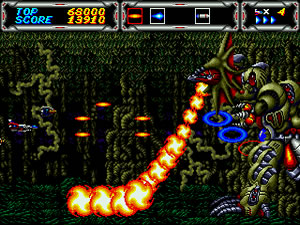 Gargoyle's lair is so cozy!

The important thing to note here is that Thunder Force III is still fun despite being too easy on Normal difficulty. I always crank up the volume when I'm playing it because the music is amazing, as well as the sense of flow it lends to the action. One little drawback of playing the Saturn port is that since the sound emulation had to be accomplished with CD tracks you need to cope with those brief pauses when the BGMs loop. Everything else about the game is just like in the original, with an added bonus of a nice low-res animated intro that plays before you choose which title you'll be playing.

My first 1LC when playing on Normal resulted in the score shown below. Then I found out that trying to maximize the score is a bit tricky, seeing that in a couple of further credits I thought I had killed more enemies even though my final score was lower. 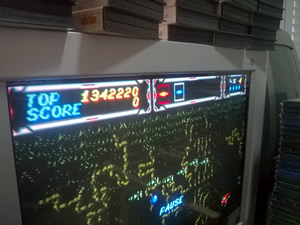