The complete name of the package is actually Shooting Love - Trizeal, but for all purposes it can just be referred to as Trizeal. Released only in Japan, at its core it’s exactly the same game that came out for the Dreamcast the year before, with perhaps a little more slowdown in a few places. The game is also an unofficial/spiritual sequel to XII Zeal / XII Stag, following on its footsteps of soft graphics and uneven design. Here the thrill of dodging is mixed with a simple scoring system based on medal chaining, which should please players who shun dense bullet curtains but still like to tackle a risk-reward challenge every now and then.

Trizeal on the Playstation 2 differs just a little from the Dreamcast version at the start screen because it makes you choose between the main game and an embrionary/demo version of the Shmups Skill Test game that appears in the arcade release Shooting Love 2007. With time Shmups Skill Test became a sort of guilty pleasure amongst players who know their way into the works of developer Triangle Service, but it just doesn’t have enough meat to keep me interested. Let alone a demo version of it. Composed of short mini-stages that succeed each other in random fashion and lack a proper set of basic rules, meaning that most of the time I have no idea what I’m doing or what I'm supposed to do, the game is just too weird for my liking.

Upon taking a look at the instruction manual I wished I could tell something about the story in Trizeal, since there's a whole wall of text on tiny fonts covering a full page. Unfortunately, so far no one has ever bothered translating it to English or any other Western language.

Starting the credit in Arcade mode leads to a brief animation showing the cockpit and the selected ship departing for battle. Basic gameplay inputs consist of shot (rapid shot actually, no one is crazy enough to face this without autofire), bomb and "trans" - from transformation. This last input selects the shot type, which is color coded and permanently shown at the lower right corner, shifting in the following order: red (wide/spread shot), green (missiles), blue (laser) and back to red, etc. The coolest thing about shot selection is that the spaceship actually transforms, assuming a different form on each shot type.

At every 15 enemies killed a power-up in the shape of a colored sphere is released. It upgrades only the currently selected weapon, so this means the player has total control of how he/she wants to power up the ship. Max power for each shot is achieved once you collect four power-ups, which is indicated by having five power cells shown in the weapons rotating hud. When one of the weapons has at least a power level of four it will also affect the other two, causing an overlap effect that increases the damage inflicted by the other shot types. However, besides this mixing effect the process of powering up different weapons has an immense influence on rank, as hinted by the increase in enemy bullet speed and the triggering of additional and dangerous patterns from bosses.

Amidst bullets and explosions, Trizeal is also marked by a constant shower of medals of varying sizes. Every single enemy destroyed releases one of these, and provided you catch them without letting any fall down the screen their value will eventually max out at 1.000 points each. Value progression starts with 10 and goes on with 20 - 30 - 40 - 50 - 100 - 500 and 1.000 points. Medals are generated at the current value but the quantity taken determines further value progression (for example, if 5 medals are created at once they'll all be worth 10 points, but then the 6th one will already give 100 points).

While medalling represents the bulk of the scoring system, bonuses at the end of the stage can also boost the score considerably. Destruction ratio percentage grants up to 100.000 points, but if you manage to achieve a 100% kill rate you also get an extra 50.000 points. Besides that, each bomb in stock is worth 10.000 points, with a maximum possible bonus of 50.000 points. Finally, every surplus power-up or bomb item is worth 1.000 points, while extra lives come with 900.000 and 2.700.000 points. 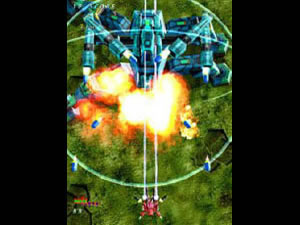 Whenever a warning sign saying BREAK OUT! pops up players should destroy everything as fast as possible. By succeeding a giant medal worth 10.000 points falls and a special section in the level starts. These "hidden" areas appear in stages 1 and 4, with the second one being a nice homage to Space Invaders. By the way, the overal design of Trizeal does not veer away from the staples of the genre: an open cloudy stroll in stage 1, a slow scramble over bridges and towers in stage 2 (the only one with ground targets), a huge battleship in stage 3, an all-out space war prior to a meteor belt in stage 4, a long stretch with rotating turrets and descending shafts in stage 5 and the showdown against a robot and the core target of the enemy in the final level.

When speaking about shot types, I rarely use missiles as the main choice. The red spread is devastating at point blank distance, whereas the laser fires a piercing shot that's great to cause localized damage and induce extra slowdown. Repeatedly shifting weapons, especially with a maxed out arsenal, is particularly helpful at draining energy faster from bosses, hence the possibility of assigning a "rapid trans" function to one of the controller buttons. I used it, unlike the 30/sec rapid shot that's one of the innovations of the Playstation 2 port. This second rapid fire alternative is really strong and severely tones down the native difficulty of the game, so I decided not to use it (note how this faster firing rate is briefly active when you're respawned after dying). Another input in this port that I didn't use is the "dadada" shot, which is nothing more than rapid trans + 30/sec rapid shot.

Although I think there's a good deal of fun (and frustration) to be had with Trizeal due to the nature of its gameplay and the medalling system, the game somehow doesn't engage the way it should when you think about the possibilities. The whole second stage, for example, is a graphical (uninspired) and musical (boring) letdown. The fifth level is a tad too long and the final one a tad too short. I might be nitpicking though, considering there's a healthy amount of variety here and some of the music is rather decent, but alas! Ships from different player sides have notable differences, such as the narrower gap of the laser beams for player 2 (yellow; player 1 is red). The ship from XII Stag is hidden and can be activated with a code at the start screen (→, ←, ←, shot × 12).

By completing the stages players unlock them in Score Attack mode. Another unlockable inherited from the Dreamcast version is the Lifting mini-game. The Omake stage is absent though, probably replaced by the proto-version of Shmups Skill Test. TATE orientation, automatic saving and full controller configuration is available, thus making this a decent port that's on par with the Dreamcast version. My 1CC of Trizeal was achieved on Normal difficulty TATE mode with the second ship (player 2 side), using the regular rapid shot. 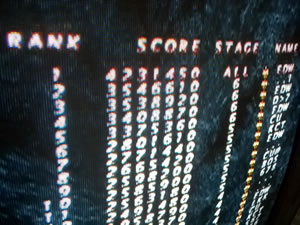 Note: Exzeal, the sequel to Trizeal, came out on consoles for the Xbox 360.
Posted by Edward at 6:52 PM