A long time ago in an arcade alley far, far away, there was a scrolling shooter called Scramble. Seeing that Scramble was good, creators Konami decided to release a sequel based on the same gameplay. It was July of 1981, and this much expected evolution of Scramble flooded the company upon release. Factories had no time to stop assembling boards, and all employees had to participate in the assembly process to meet demand. The new venture was named Super Cobra, and this blog essay is another tiny love letter to this short-lived yet highly addictive franchise.

The most portentous part in the above paragraph was taken directly from the History section of the Konami Arcade Classics disc released for the North American Playstation. In bringing together ten arcade titles – of which 5 are shmups – this compilation provides a nice little window to appreciate the kind of fun these primitive games were capable to deliver, and I daresay the highlights are definitely Super Cobra and its predecessor Scramble. In the case of the sequel, those who can't see past its humble lines, the flat changing colors and the seemingly unattractive aspect of a snapshot are missing a lot. Not only does it expand the original idea in length and difficulty, but it also makes you pilot a helicopter. And since helicopters are badass Super Cobra is also super cool by default.

I know some people might think I'm exaggerating, but despite the jokes I do believe Super Cobra is a fine game. It has aged much better than other titles of the same era, and even today it's capable of delivering the kind of rush that combines tight gameplay, random elements and sharp reflexes in a quick romp that favors score chasing. Granted, once again it's necessary to handle a fuel reserve, an aspect that slowly disappeared from the genre as the overall arcade scenario leaned towards more straightforward shooting experiences. However, dealing with fuel recovery was rarely as well implemented as in both these games.

Once Super Cobra is selected from the main menu a brief instruction panel is shown prior to starting the game. Controls aren't reconfigurable and work with ○ for shot and × for missiles. The screen scrolls at a steady pace, making you maneuver through hills, caves, valleys and above rooftops as you face all sorts of ground and aerial opposition. Freedom of movement exists in the left half of the screen only, so watch out for that when flying the helicopter to the far right against walls (it's very common to die because you crashed onto something that should've passed already).

Besides dealing with all sorts of hazards, players also have to cope with the abovementioned fuel mechanic. In essence it's pretty simple: just destroy the fuel tanks on the ground to keep refilling the fuel gauge. If fuel reserve gets low a typical alarm will sound, and if it depletes completely the helicopter will plummet to a horrible, fiery death. It's not uncommon to give in to despair when the fuel alarm goes off, especially when all fuel tanks are located in hilly areas and you're forced to fly high. Missiles have a very specific descending arch and their drop is affected by the chopper's movement, in a primitive yet very neat way of infusing motion physics in the gameplay. Just remember you can only have two of them at once on screen, which is in fact the reason why I did not activate turbo fire for button ×. Aiming is certainly more important than firing rate in this case. 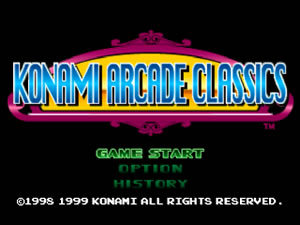 With 10 stages and a final level where you need to collect the "booty" in order to loop the game while winning an extra life, Super Cobra is not only longer than Scramble but also a tad harder. Every level has a very specific theme or enemy, and all of them require different approaches for better survival chances. The more comfortable you get with the game the more you realize the importance of aiming in order to proactively destroy the turrets that fire those nasty 45º shots. With the exception of one area where they don't shoot, they're a very unpredictable foe just like the hovering mines in stages 3/4, the falling rocks/bats of stage 5 and those damn saucers in stage 8. Stage 9, on the other hand, doesn't add anything new to the game and is so short that feels like something thrown in to take maximum advantage of the allocated ROM memory.

Besides the life gained with the loop there is only one score-based extend registered at the 10.000 points mark. Unlike what happened with Scramble, whose version in this compilation is actually the tougher Stern variant, Super Cobra plays just like in the arcade ROMs floating around the internet. The Konami Arcade Classics disc itself is presented in a bare-bones fashion, with an animated intro and a simple interface. In the global options it's possible to save/load (manually) and switch off feedback a.k.a. controller vibration – a nice thing to do in Super Cobra unless you want to play with something that feels like a transforming Gremlin.

As expected, I had a great time with this charming little game. It can be infuriating at times and induce bouts of restartitis on the side, but it's also loads of fun. I love the sound effects to the point I don't even care about the absence of music. My best run ended in stage 2-5, as per the picture shown below. 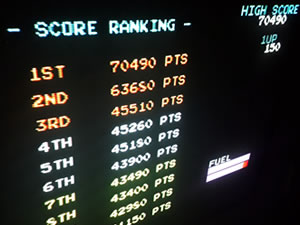