It's hard to picture it these days, but back in the 90s some games were definitely a product of the general infatuation with new storage media, more specifically the compact disc. The widespread love for the CD was such that the expectation created by the video game add-ons allowed companies to market them as a true revolution in 16-bit console gaming.  The main reasoning for that was better audio and the addition of fully animated sequences plus crystal clear voice-overs, improvements that often warranted re-releases of cartridge games in CD format.

However, most CD versions of 16-bit cartridge or HuCard games didn't really need to exist. With a few exceptions that either expanded the original game (such as Super Raiden) or fully embraced the capabilities of the new media (such as Spider-Man and Batman Returns for the Sega CD), the majority of the upgraded titles offered very little extra content except for the presumed CD audio quality. And even this audio upgrade can be a debatable issue. So the question we ask ourselves today is: did games like Daisenpu Custom really need to exist?

Daisenpu had been out for a year already. A port of one of the least famous Toaplan vertical shooters, it wasn't a standout in any way, yet someone inside Nec Avenue thought that the PC Engine library needed a CD version of it. 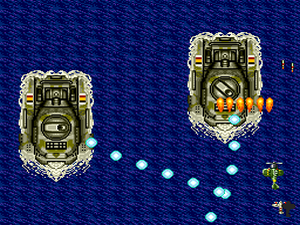 The basic gameplay is unchanged from HuCard Daisenpu. Button II shoots with no autofire (get a turbo controller!) and button I summons a helper squadron of 6 planes. The mission is to slowly raid land and sea to eliminate nazi tanks/boats/turrets in a world war setting of methodical progression, in a shooting adventure that never picks up the pace. Each plane in the helper squadron flies and shoots alongside the player, plummeting towards the closest enemy once hit. If you press button I once they are in position they will all perform a kamikaze attack as if they were hit. By quickly tapping this button before the squadron is in place after the initial summoning you get a bomb blast that sacrifices all planes in a huge explosion that nullifies incoming enemy bullets.

Upgrades are obtained by destroying color-coded trucks and picking up the items. There's the quintessential power-up (orange), extra helper squadron (white) and extra life (blue). Green trucks are all bogus and don't give out anything. You can't see your score while you play (not even by pausing the game), but an extend routine is in place to grant you more extra lives seemingly at every 100.000 points, an interval that's extended once you reach 300.000 points.

In the world of Daisenpu / Daisenpu Custom all the enemy will ever see is the player's plane. Every single aimed shot or aimed bullet spread will target the player, which means you can always draw enemy fire away from your squadron while they fly peacefully and do their job. Managing to do that and keeping clever angles as you dodge is one of the tricks to survive longer. When facing a bigger enemy, such as one of the bosses, there are times when it's best to bomb than to risk dodging the overlapping patterns. Each new life comes with two full squadrons, which should be okay to handle any boss checkpoint.

What's actually different in this CD version, one might ask? I would say the main difference is its clear division into separate stages. In the original Daisenpu the game unfolded with no stops whatsoever, with music change being the only indicator of level progression. The four original areas were expanded to seven complete levels in Daisenpu Custom. Graphical assets were rearranged, some large enemies were promoted to bosses and most stages were split in two, in a customization job that doesn't do anything wrong but somehow lacks the cohesion of the original. An example of a botched part is the start of the 6th stage, which puts the player directly into the frying pan with enemies from all sides.

There was no attempt by the developer to steer away from the game's original concept of having absolutely no aerial enemies, which is good. The final level is still familiar terrain but brings a more powerful type of tank that's exclusive to this version. Unfortunately the original military-themed music received a flamboyant synth-based makeover that doesn't always gel with the slow paced action; it's as if the soundtrack to one of those cheap war movies made by the Cannon Group in the 80s had been slapped onto the game itself. That would’ve been nice if only Chuck Norris or Michael Dudikoff had also been included in nice animated cut scenes, but alas! Daisenpu Custom didn't receive any special treatment in that regard.

While the game isn't essentially better or worse than its original mold, the shortage of new material and the minimal changes made for Daisenpu Custom are barely enough to qualify it as an expensive arrange version. After all it came out in a separate CD during an era when arrange modes were a rare treat in console gaming. The few ones that got it right appeared for the competition instead, as seen in Slap Fight and Grind Stormer.

The best 1CC score I got on the game is below, playing on Normal and reaching stage 2-7. Enemies fire more frequently in the second loop. Medium-sized boats coming from behind even fire as they become visible, so don't hug the bottom of the screen if you don't want to lose a precious life there. 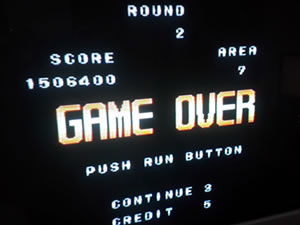