Maybe it's destiny or perhaps a stroke of bad luck mixed with unfortunate circumstances that some game companies will strongly shine once and then disappear into oblivion. During its brief stint of existence, Sky Think System never delivered anything of note but did put out a game called Harmful Park for the Playstation. Released in small quantities with no special advertising only in Japan, it was only natural for it to acquire a minor rarity status soon after. However, once people realized it was actually a very good game despite the ridiculous cover art, Harmful Park became even more sought after and prices skyrocketed. Oh poor collectors!

The game in question a lighthearted, stylish, lovely cute'em up that takes the same approach to design as the Parodius series. It's a very nonsensical shooter with all kinds of wacky enemies thanks to a crazy scientist casting an evil spell on a theme park and populating the attractions with all sorts of flying machines. On that front the game also boasts some steampunk influences, which broadens its scope into a very unique experience defined by superb use of color and exquisite animation, duly backed up by an equally engaging soundtrack. The game is also a very relaxing ride in its starting difficulties (Easy or Normal, default is Easy), an aspect that can't be taken for granted when talking about its target audience.

And for those players who also like to dig beyond the surface of a game, the good news is that Harmful Park also offers a very solid scoring system.

The skinny girl riding that flying bike sure doesn't seem that menacing, but the truth is that she's able to fire an impressive array of weapons. By default, these can be either cycled with buttons × and ○ or directly selected with the trigger/shoulder buttons. Potato (R1) fires a vulcan shot with decent power, ice (R2) fires long laser-like ice beams, pie (L1) throws one pie at a time in a specific arching trajectory and jerry (L2) shoots colored jelly slices with homing capability. Shooting is accomplished with button □ and bombing with button Δ. Bomb animations depend on the chosen shot type, which in turn can be separately powered up three times by collecting a P item.

The diversity of the weapon gallery allows for all sorts of approaches towards the gameplay, but in general seasoned players should breeze through the game if going for a simple survival run. Enemy bullets are often slow, and the few overwhelming bits are reserved for the final factory stage. Before that you'll cruise through an open amusement park, a haunted house, a tropical zoo, a rollercoaster and a carnival at night time, all crafted with impressive attention to detail. The most basic scoring techniques in a straightforward run include collecting the green diamonds for point bonuses (value starts at 100 and maxes out at 5.000 points if you don't let any of them fall to the left), uncovering hidden happy faces for 50.000 points each and reaping the end-of-stage bonuses for performance (including 200.000 points for a 100% destruction ratio).

Fun factor and excellent artwork aside, in the world of Harmful Park there's much more than meets the eye for score chasers. This is yet another case where a single rule can completely change the way you play a game, and the rule is: all enemies destroyed with the same projectile add to an instantaneous multiplier that can reach ×16. The italicized bit above explains why the potato gun is excellent for survival but extremely poor for scoring, whereas ice is the perfect choice to get multipliers from streamlined enemies. Once you realize that, the most logical extension to this basic scoring rule is that weakening stronger enemies before dispatching them with lots of popcorn around is the secret to amassing great numbers. While timing this requires lots and lots of pratice, striking the blow is easily achieved by using potato's bomb (it is, in fact, a huge potato that explodes and damages everything in sight).

The reason why the potato bomb is the ideal combo dealer is its huge explosion blow, which counts as a single projectile. Other bombs might win on the matter of power, but can't compete with potato as far as scoring goes. Ice creates an immense beam that can be slightly moved up and down, pie shoots out a rotating shower of pie shots and jerry surrounds the player with a big jelly that inflicts some mild damage on enemies but doesn't allow any weapon change while it lasts (all of them come with invincibility). For what it's worth, ice can't compare with potato but might be of some use for scoring, the other two don't serve any real purpose other than survival. 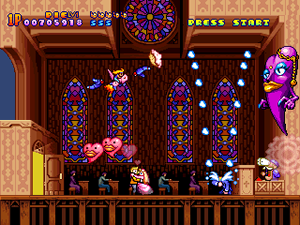 Marriages can be dangerous!

Since extra lives are achieved at every 500.000 points, bombing for a higher score and suiciding to get more bombs is a strategy that comes naturally after a while, just remember to not die with the weapon you want to preserve (only the weapon you're currently carrying is lost). It's okay to inflate the life stock if you want though, the game doesn't have rank and isn't a Raizing title after all. Note that getting more multipliers and scoring higher also increases the spawning rate of diamonds, power-ups and even extra bombs, to the point where collecting all diamonds might become tough due to the slow speed of the gadget you fly on.

Though simple in theory, the execution of the abovementioned actions isn't as easy as one might think. Since there's often a handful of decisions the player must make with regards to weapons and ideal timing, errors are very common due to the constant need of on-the-fly changes. Thankfully, for all our shameful restartitis needs there's a pseudo soft reset function that sends the game directly into game over status (SELECT + START).

With six stages of rather decent length, it's clear that Harmful Park provides good fun for all players, neophites and experienced alike. There could've been a seventh full stage, but the developer thought it was better to have it as a separate challenge in a Score Attack game option. Other offerings include a set of three non-shmup mini games accessed from inside the Options screen. All of them can be enjoyed with friends, but the most interesting is the racing one (Sky Circuit). Completing the package, we also get manual save/load functions and the ability to fully reconfigure the game inputs.

Soon after I understood the scoring system I established 6 million as my aim for a 1CC, and the result I got is below (Normal difficulty). I beat it, saw the full ending once (its's just as long as the opening) and decided to move on. I might try to improve this score in the future if I ever get back to the game. One interesting detail is that Harmful Park doesn't reset the score when you continue, but shows the number of used continues alongside your result in the high score table. 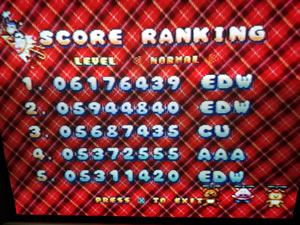