Steredenn - Binary Stars is the expanded revision of a digital game called Steredenn. First released digitally for several platforms, it soon received a limited print run for the Playstation 4. The game preserves the overblown pixelly graphical style of the original title and adds new ships, weapons and modes, keeping the aspect that distinguished it from its brethren: the roguelike gameplay. I confess I'd never really come close to the style ~ or the term itself ~ until now, probably because it is so rarely done in the shmup genre.

One of the fears I had before embarking on this game was the dreadful prospect of having to grind my way towards a playable situation. Fortunately that's not the case. Everything you need to achieve victory is supposed to be granted in each and every run, which ends when the last energy bit is gone with absolutely no continues allowed. Players (re)actions depend on very random factors that affect the spawning, placement and behavior of enemies as well as the selection of power-ups that come along the way. In essence, no run is like the next. That's one of the cornerstones of the roguelike approach originated in RPGs, the genre that actually gave birth to this very specific branch in video game design.

The graphical style in Sterendenn - Binary Stars is definitely an acquired taste, and my feeling is that the emphasis on foreground action kinda diverts the attention (on purpose) from the simplistic design of the backgrounds. That shaking effect when anything explodes can be toned up/down or eliminated in the options, which also allows the activation of a switch called "Cinema" that completely removes the HUD (beware, I did it by accident once and thought the game was bugged!). If the graphics aren't your cup of tea, chances are you'll feel a little better about the energetic, rock-driven soundtrack that certainly pumps things up a notch.

After the federation mothership is obliterated you dart into your mission all by yourself, shooting your basic default weapon with button ×. Cargo ships pass by every once in a while, bringing new random weapons that can be collected with the Δ button. There are only two slots available for them, so if you want to take a new weapon you'll have to relinquish one of your ocuppied slots. Selecting the weapon to use (or to be exchanged for a new one) is done with buttons □ or L2. Finally, each ship has a particular special ability triggered with buttons ○ or L1. Tempest is the name of the default ship, and its default special move is a short-range melee attack.

There are more than 30 weapons in the game, of which only some will ever be available for use in any run. They are divided into categories that dictate the nature and use of most upgrades you'll come across in between stages after beating bosses. The main categories are bullet (yellow), energy (red), heavy (orange) and bots (purple), but you're also entitled to activate a couple of shield-like weapons and replace your special ability attacks. Weapon behavior varies greatly, so the only real advice to be given here is to try them all and see which ones work best for you in regard to power, reach, autofire, reload/burst mechanic, piercing ability and influence over ship speed. However, coming to terms with a certain assortment of favorite weapons is just one part of the general strategy, after all the choice of upgrades can make or break your chances at surviving the odds.

With each defeated boss any lost health during the stage is replenished and you're given the chance to activate one out of several random upgrades for attack, defense or scoring, as well as a few that provide influence on other gameplay factors. They all have some sort of self-explanatory text to guide you, but figuring them out does take a while nonetheless. Just like the weapon gallery, the amount of available upgrades is overwhelming at first and only becomes more natural after you've clocked a few hours with the game, eventually unlocking new ships and some extra game modes in the process. These new ships represent the most drastic change between different runs, to the point that the game becomes a completely different beast. The Specialist ship, for example, is only allowed to use bot weapon variations, whereas the Red Baron is given only two weapons besides its special ability. Moreover, some of the special abilities, such as the rocket circus from the Fortress ship, take a little time to recharge.

Regardless of the chosen ship, Steredenn - Binary Stars makes no concessions at all in its gameplay, so be prepared to get shafted with bad luck and lousy weapons for several credits in a row, only to be given that favorite weapon for a good while afterwards. Of course good weapons don't necessarily mean an easy ride though, as players are kept on their toes all the time. Blink and you'll be engulfed by successive traps and overlapping waves, not to mention those resilient and unpredictable bulky ships from the last couple of levels. Most hits consume only a health cell, but the ones of the heavy kind can take up to five cells in a single blow. And getting to the battleship (6th stage boss) or the mothership (7th stage boss) while low on health isn't encouraging at all. Speaking of bosses, it's interesting to note that they get bigger and bigger as the game progresses, and up to the carrier (5th boss) they can have at least two different forms, each one with its particular set of attack patterns. 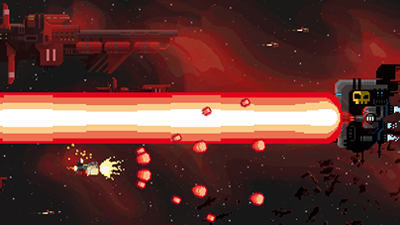 The Red Baron against one of the not-so-large bosses

In the roguelike nature of Binary Stars, moving away from what comes off as luck to something that can be considered proper knowledge of the gameplay definitely takes lots of practice. The simple task of not getting hit and preserving health has another benefit that becomes clearer the more you play and aim for better scoring results: the multiplier rises up automatically as you destroy enemies and reduces a little for every hit you take. The more energy you lose the bigger the dent in the multiplier. That's cool because in the end you don't need to consciously think about the scoring system at all.

My favorite upgrades when trying to go the distance (the ones not related to power increase) are the laser shield (protects the ship from a laser hit and recharges automatically after a few seconds), chain reaction (makes all enemies explode into a short radius burst that damages everything that's close) and shield breaker (shields can be destroyed by your weapons). Only when I've collected those and the remaining ones aren't that useful I might pick up the ones that affect scoring (score boost, combo protection). There are lots of other mysterious upgrades to collect and some of them depend on the choice of ship, but much caution must be taken when beating one of the special hidden bosses. All upgrades released right after them have both a good and a bad effect on the gameplay. Note: by pausing the game you can see the upgrades you've already acquired.

Even with all the minor aspects that rub me the wrong way, such as the impossibility to remap controls or adjust the screen size to your liking (it's naturally a little larger than the usual widescreen TV), the need to press the fire button again when you switch to a different weapon (which can be eliminated with the "improved reconfiguration system" upgrade), the random hazard modifiers applied to complete stages (quantum asteroid field, sunburn, bulletstorm), the bogus items released by extra bosses and a few rare occurrences of severe framerate skipping, I had a very hard time leaving Steredenn - Binary Stars behind. It can be extremely unfair at times, but it's still a massively addictive game that will always pull you in if you give it a chance. It's a one of a kind achievement in the shmup genre, that's for sure.

The main game can be enjoyed solo or in co-op, but as I mentioned above the package also includes a few unlockable extra modes. In Daily Run players share the same levels, upgrades and weapons all over the world, Boss Rush is a challenge that changes weekly and Arena is a glorified boss practice mode where you can tweak everything for ship/weapon combinations. My favorite weapon duo for the Tempest ship is supergun + fusion hyperblaster, and that's the ship I used when reaching the 3rd stage of the 2nd loop in the picture below (online leaderboards available). Further loops have suicide bullets and bosses that fire trickier variations of their original patterns. 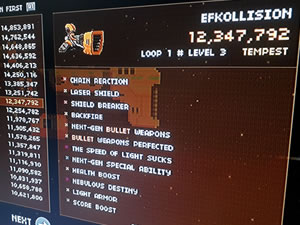