There are shmups that defy genre conventions in the most diverse ways. Within this special category, there are those that succeed and those that fail. Within the batch that fails, there are those that at least manage not to do anything blatantly wrong and those that for some reason or another are barely playable, exhibit a few downright broken traits or adopt boredom as a defining element of their gameplay. If we're to choose one of these infamous categories for Strike Force Hydra, those who played the game will probably agree with me that it deserves to be included in the latter.

Strike Force Hydra is also a prime example of the backlash that befalls many shmups made by European developers. It's got pretty much all the aspects that made the "euroshmup" term so shameful, including uninspired stage/enemy design, unbalanced difficulty, health bar and inertia. The game was released alongside an identical version for the Game Boy Advance, so it's hard to tell if one of them was ported from the other. If that's the case, then it coming out for the handheld after a Playstation original would make a little more sense. The problem is that no real excitement is to be seen in either version of a stale hovership adventure that seems to be loosely inspired by River Raid.


Hovercraft strike over the river
(courtesy of YouTube user FunCade 64)

Levels in Strike Force Hydra are divided in three sections. In the first and the third sections you battle enemies and fight bosses in the end. The intermediary parts are simple corridor arrangements where you don't need to shoot, instead you're supposed to pilot the hovership in order to avoid walls or obstacles (the so-called "speed" section). Button × fires your main weapon, button □ fires a secondary weapon, L1 jumps and R1 activates a boost function. Every once in a while a wave of tiny rotating enemies will appear. Destroy most of them and you'll release an item: the red one powers up the main weapon and the green one powers up the secondary weapon.

Having both shot buttons pressed at all times is recommended since they come with autofire by default and the secondary attack is quite powerful even though it's got an extremely low rate of fire. Upgrades enhance them by a good margin. The maxed out main shot, for example, is a thick laser beam that melts everything in its path. The only problem is that it also overshadowns everything, including all regular bullets. For a while I avoided getting it for the sake of bullet visibility, but once I noticed it's much better to have power rather than visibility I changed my mind. The Whirl-Wind boss (stage 3.2), for example, can only be destroyed before its rotating kamikaze attack if you have the laser.

Speaking of bosses, if only they lived up to their badass names (such as Master-Laser, Attack Drone Alpha and Crab-a-rang) this game would be a completely different kind of beast. They all fire pathetic, predictable, extremely easy patterns with no variation whatsoever. As for regular enemies, they're a joke. It's either turrets on the sides or staggering ships/bots descending with little gusto. If by any chance you get cornered you can always use the jump input to quickly reach the other side of the screen and be safe. By the way, jumping is the second most important dodging resource in Strike Force Hydra, the first one being learning how to overcome inertia. The tip is to move slowly, enemy bullets are never fast anyway and the few dangerous attacks from bosses won't harm you if you use those jumps wisely.

Each credit offers five lives and no energy recovery of any kind. Energy is drained every time you touch a bullet, an enemy or a wall (in the speed sections that is). Deaths send you back to the beginning of the section and take away one power level of your weaponry. Even though that seems harsh, once you get the hang of things you'll realize how easy the game actually is. Environments alternate between jungle, ocean, ice and some sort of factory backdrop, with light techno themes that either fit the graphics (jungle part) or just resemble elevator music. Sound effects are extremely loud and practically engulf the music whenever there's any action going on. 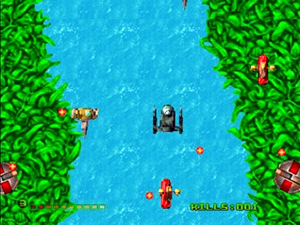 Welcome to the jungle

No matter how lame the gameplay looks like, the scoring system is even worse. Never have I seen such disregard for the score mechanic in a shmup. You will see a display for your kills, but it's reset every time a new level starts after you're given some stupid ranking description for your performance. The instruction booklet even mentions the number of kills is only supposed to be reset upon death, but that's not the case. Talk about some dumb, useless alocation of programming resources!

By the way, the instruction booklet is riddled with false information on the gameplay, which is just another sign of the laziness that plagues Strike Force Hydra. It says there are two types of button layouts, but there's no option at all to switch to a different control setup from the one I described above. It also states you can recover health by figuring out the "secret" behind certain types of rotating enemies. Unless this secret involves some sort of arcane proceedings it's just not there, and so aren't the power-ups mentioned to be present in the toughest paths of the speed sections. There's even a proper score display in the snapshot for the screen description, which is of course nowhere to be found in the final product.

Alas, sometimes I wonder why I even bother. Saying Strike Force Hydra is bad is a gigantic euphemism. It's one of those games that can make people lose faith in the shooting genre, so be warned and warn your friends. The picture below appears briefly during the final credits, then you're back at the start screen with no bonus game to play after defeating the game on the Hard difficulty (another lie of the instruction manual), which I had just done. On a single credit, of course. 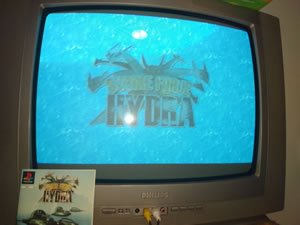