Even though on the outside both versions of this game are the same, there are actually a few differences between them. The Playstation title was the first one to be released as Bokan To Ippatsu! Doronbō, whereas the Saturn one came out the next year with Kanpekiban added to the title. For all purposes the latter is a slightly enhanced port of the former.

If you're a fan of the 70s anime Yatterman, which was a part of the long-running Time Bokan series, you'll feel quite astonished by this awkward little game especially when you realize that you take on the role of the villains instead of the heroes. Two buffoons and their sexy blonde leader pilot strange-looking vehicles and face off against mecha bosses controlled by several protagonists from the Time Bokan franchise such as Yatterman, Zenderman, Rescueman, Firebird (from Yattodetaman), Gyakuten Ippatsuman and Itadakiman. Of course that bears no weight at all on the actual gameplay, I just wanted to stress how much fan service Time Bokan / Time Fighters aficionados will find here.

The good news is that the gameplay, albeit offbeat and weird, offers enough substance for fans of the shooting genre to have some fun. While it doesn't push the envelope on any aspect whatsoever, it does strike a peculiar balance between risk and reward. In short, play safe and enjoy a laid back ride, or get cocky and risk losing the credit in a flash.

Three inputs need to be used in order to play Bokan To Ippatsu! Doronbō Kanpebikan: shot, bomb and dash. By default these work respectively with buttons A/C, B and L/R, but you can switch to a couple of other fixed configurations if you go to the Options from the start screen. In each level you must chose one vehicle from an initial assortment of six (after the third level another three become available), but you can't select the same vehicle twice in a row. All vehicles have specific abilities for movement, shield and firepower, with their own unique shot patterns. Bombs, on the other hand, have only two variations for all of them and behave in a very special way: a press of the button arms the bomb, and once it's ready another press releases it. Whenever you're on ground level they come out as arching exploding blasts, but if you're underwater or you're flying they come out as straight missiles. Bombs are also unlimited, and are the most important feature for scoring.

Using bombs for scoring is quite simple actually. The more enemies you destroy in a single blast the more you score. In a nutshell, it all comes down to identifying the best moments for bombing. Now for the catch: besides not granting any invincibility to the player, whenever you have a bomb armed and you get hit all your energy is lost, the vehicle is destroyed and the Doronbō gang is forced to ride a weak bike armed with only a pea shot, one hit away from GAME OVER. All is not lost though, since you can recover the vehicle form if you can survive long enough either to enter the next stage (the health bar is replenished at the start of every level) or to get to the next skull item carrier (it will release a shiny helmet icon that brings back the vehicle with the energy level you had prior to losing it).

Other items you might get from these carriers or by destroying random enemies consist of power-up (D), health refill (birds), temporary turbo speed (pink cat), power down (a dark helmet), point bonus (diamonds) and extra credit (potion). Most of the items you'll come across, however, will be golden and silver skulls that fill up a meter on the top of the screen. If the meter reaches 100 the vehicle will turn into a huge invincible mecha as the meter decreases towards zero. Besides becoming invincible, you will also recover all your energy level when this happens. The only downside is that you'll be unable to use bombs, which makes collecting skulls only really useful for survival (strategic or not). Skulls aren't worth any points whatsoever. 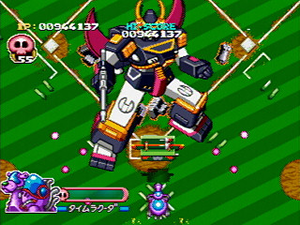 A rematch against boss Gyakuten Ippat(s)uman in stage 7

Most of the time the game is rather easygoing. Reaching max power makes the ride even easier, but you need to collect all three Ds to achieve it in every level. There are a few parts that do incur in inevitable perils though, and stage 5 is notorious for having almost all of them: the screen scrolling sideways faster than you're able to move, exploding mines, beams that fall over your head if you destroy them at the wrong moment and also one of the trickiest bosses in the whole game. However, when the going gets rough don't forget that you can always use the dash input in order to literally get through any hazard. This short lateral move makes you invincible at the cost of some recovery time, but it does wonders against some of the most threatening attacks from bosses. Unfortunately, if you've been knocked down to bike form you can't use neither the dash nor any bombs.

A few details are bound to bother some people such as the consufing firing patterns of a few vehicles, bullets being dangerously engulfed by explosions or the intrusive animations that pop up all the time in the lower display (left for player 1, right for player 2), which impair visibility when you least expect it. Other than that it's just a matter of adapting to the strange rules of the gameplay, coping with the abundance of silly dialogue/voices and enjoying the goofy art design, which ranges from clunky to deliciously creative.

The biggest difference from this game and its Playstation counterpart is that Kanpekiban comes with one more stage prior to the final level, an urban area at nighttime with suspended bridges and parks full of trees. A few extra animated sections and minor tweaks applied to the presentation and the sound during boss introductions complete the package. Nothing changed in the actual gameplay, which still does not reset your score if you decide to continue (automatic save is implemented by default though).

My 1CC score shown below was achieved on Normal difficulty. The sequel Bokan Desu Yo is only available on the Playstation, so that's where I'll head next in order to see beautiful bad lady Doronjo in action again. After her win against the good guys in Bokan To Ippatsu! the poor thing still doesn't get to celebrate victory. On the contrary, you almost feel sorry for what happens to the trio once the final boss goes down. 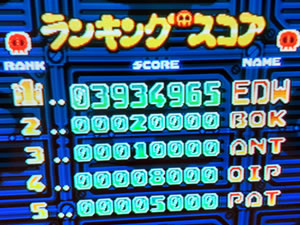