The Hunt for Red October (SNES)

Despite the fascination that surrounds them, my feeling is that submarines were never a "thing" during the golden era of gaming as far as shmups go. However, given the success The Hunt for Red October achieved in movie theaters throughout 1990, its video game adaptations had all possible chances to leave a standing mark in the submarine subgenre. Speaking of the home console market, three games came out for Nintendo platforms, and while they seem to be the same on the outside they're actually quite different from each other.
The NES version, for example, isn't quite like The Hunt for Red October on the Super Nintendo,  which makes sense since these games were developed by different companies. The SNES version also came out a couple of years later, and given how it turned out this leads me to believe the game was only taken out of the development shelf in order to try to cash in on the Super Scope peripheral, even though the light gun bazooka is only used in the bonus areas and during the battle against the last boss. Thankfully the Super Scope is completely optional, as in most of the 11 titles developed for the accessory.
Defection time
(courtesy of YouTube user glennznl)
In the quest to lead the Red October submarine across nine missions that don't really follow the plot of the movie (or the novel), the player has a wide array of functions at his/her disposal. All buttons are used in the SNES controller, starting with Y for torpedoes (frontal attack), B for bombs (downward attack), X for surface-to-air missiles (vertical fire), A for surface-to-surface missiles (an arching frontal attack), L for direction switch, R for cavitation drive (navigate undetected) and SELECT for "electronic countermeasures" (a device that when dropped disables all nearby enemy fire for a few seconds). The lower HUD shows the ammo for each resource, as well as the amount of damage taken by the sub, ranging from 0 to 100%.
You'll be using all four face buttons of the controller a lot, whereas R and SELECT are best reserved for tricky sections or for when you are low on health and need whatever resources you can to survive. After all there's just that energy meter to get through the game, with only a little recovery in between levels and two other opportunities to get some health/ammo back. One of them is a single in-game item that provides the sub with minor repairs and refills the stock for all main attacks, the other is the periscope icon that takes you to a gallery view where you need to shoot down jets and ships (the sections where the Super Scope is enabled).
Since moving the crosshair with the regular controller is so slow, anticipating enemy trajectory is the best way to perform better during the periscope bonus intermissions. A good kill ratio guarantees a good repair level on the sub, as well as the replenishing and even maxing out of the weapon stock. It's by far the most reliable way to keep the submarine in healthy conditions, so try not to lose any periscope items if possible. If the sub gets wrecked either by enemy fire or by colliding against obstacles (100% damage) the game is over. However, if you fail to complete a mission because you depleted the necessary weapons to kill a boss or because the cruise ship you're escorting gets destroyed before reaching its destination you get sent back to the map room instead of ending the credit right away. You don't get to recover any health or ammo though.
While the graphics aren't anything special, with little flair and lots of blue and gray, the physics for the movement of the submarine and the behavior of weapons is rather well implemented. The soundtrack is as repetitive and boring as it gets though. Getting used to the rhythm of the game and the reload cycles of enemies proves to be essential in the long run, especially during later levels. Prior to each stage the map room shows the available levels/missions with a scrolling text message describing their objectives. Completing the available one(s) will unlock further missions, which can be tackled in slightly different order if you so wish. After the initial defection stage you get two missions in the Caribbean (one of them to escort the abovementioned cruise ship), three missions in the North Pacific (oil platforms is the hardest), two missions in the Mediterranean and a final mission where you return to the USSR to prevent a coup attempt to overthrow the communist party. 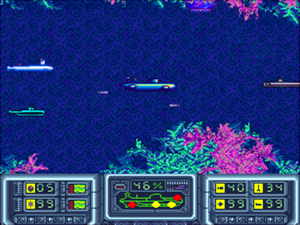 Diving in dangerous waters
In spite of the pressure imposed by having only a single health bar and by the lack of continues for explicit practice, The Hunt for Red October isn't an overly hard game. It's got its share of tricky moments, but memorization and careful play will inevitably result in victory. As for the final boss, if you get there in good health conditions you can safely ignore the minor enemies and just bombard the large ship to oblivion. Going out of your way to take them down (or any other enemy for that matter) is useless because the game has no scoring system.
Even though it doesn't do anything fundamentally wrong, the game doesn't do anything to impress either. Fans of methodical and aim-oriented shooting might have mild fun with it, players who enjoy fast and flashy action should certainly stay away. That said, comparisons between this game and the NES version are natural and expected once you've played both. In my opinion the NES wins in pretty much all aspects that matter, including diversity, challenge and presentation (the Game Boy is disregarded for obvious reasons). For fans of the movie, unfortunately there's no mention at all to the character played by Sean Connery in the SNES game.
Neither the US nor the Japanese version of The Hunt for Red October for the Super Nintendo has an options screen, which is surprisingly present in the European cartridge. No need to worry about it though since it only includes the choice for stereo/mono sound and a BGM/sound test. 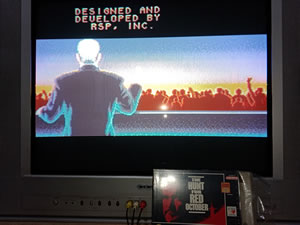