A unique game in its own right, Viewpoint wowed arcade environments at the time of its release thanks to a solid combination of exquisite game design and intricate difficulty. The port for the Mega Drive only appeared at the end of the console's lifespan exclusively for the North American Sega Genesis market, and while it does take a hit thanks to the adaptation to a less powerful platform it still retains the game's peculiar atmosphere. The distinctive nature of the isometric perspective is put to good use here, which is always nice since this style of shooting was and still is quite rare these days.
Though not as grueling hard as the arcade original, the Mega Drive port still packs a punch in terms of difficulty. There are lots of tough sections in the game, of which the first challenge is actually getting used to dodging. One has to admit that projectiles flying over a flat isometric surface require a slightly different approach as far as the judgement of bullet speed and proximity goes. Once this first barrier is overcome the game opens up in terms of fun, mainly because it rewards good strategies and the natural memorization that comes with repeated play sessions. 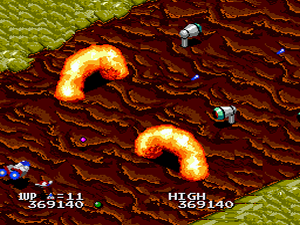 Warning, intelligent turrets ahead
Each stage in Viewpoint has its own flavor and share of trippy enemies, from giant tires and moving springs to floating fish and insect flocks, as well as a crazy mix of mechanical and animal beasts awaiting at the end of the levels. According to the instruction manual you're the pilot of the "Byupo" fighter ship, and that's it for story. Viewpoint is all about gameplay and the use of only two buttons to succeed: button B fires your main gun and buttons A or C trigger the available special attacks. By holding B you build up a more powerful shot that's unleashed when the button is released, with three charge levels that naturally depend on how long you keep the button pressed.
Special attacks or bombs come in three types that can be restocked by collecting the corresponding item: a fire expanding barrier (red F), a series of homing cluster bombs (green H) and an all-encompassing shockwave bomb (blue W). You can carry a maximum of three at the same time, with the newly collected bomb replacing the oldest one (note that special attacks are independent of life stock, so don't spend all of them expecting you'll get a new set after dying). The remainder of in-game icons consist of option (creates two hovering satellites that increase your firepower and block regular bullets), barrier/shield (sustains three hits but does not protect against lasers or enemy collisions), star (bonus points that eventually max out at 81.560 points if you don't die) and 1UP (extra life).
Touching walls is harmless in Viewpoint, and even though some surfaces seem to be transparent there's no danger of falling through them and losing a life. Flicker is minimal, but slowdown kicks in heavily whenever sprite manipulation requires more of the hardware. Since the speed of the ship is finely adjusted to the gameplay you'll also be at the mercy of moving at a snail's pace, so don't rely on slowdown as a survival aid. What helps, at least in this particular version of the game, is the amount of extra lives you achieve based on your score.
The extend routine is a bit odd. It starts with 50.000 points, but once you get past the first hundred thousand a new life is granted at every 30.000 points. There would be no problem with that if it weren't for a few checkpoints where you're able to score more than the amount needed to win an extra life, such as the fourth skull boss. If you manage to reach his final form you'll have gained over 40.000 points already, which means this is yet another unfortunate case of a broken scoring system.
Warping into stage 2 and breaking through the crab boss
(courtesy of YouTube user GDRI :: Game Developer Research Institute)
Although many people consider Viewpoint to be a very difficult shmup (in whatever form you find it), the Mega Drive version always allows a good means of recovery on every checkpoint, either by quickly granting an option item or even one bomb if you have depleted your stock completely. The port is known for including a secret warp gate in every level, of which the only one I saw was the warp in the first stage (destroy the core of the revolving obstacles). You're also supposed to come across a 3-in-1 special item that replenishes your shield and your whole bomb stock, but I didn't get to see it during the time I spent with the game.
Speaking of bombs, considering it's not possible to carry more than three at a time players are encouraged to use them if they know a new one is coming ahead. It's important to stress however that the homing bomb does not nullify enemy bullets like the other ones do, which makes it less effective as panic relief against bullet clouds. The best bomb in this case is definitely the blue shockwave, with the fiery barrier only blocking bullets that get engulfed in its deadly trail.
Don't take the score you see during the end credits as your final score. In the 1CC result below I beat the game with 22 lives left in stock and got an extra bonus of 26.000 points that only showed up when I got back to the start screen. Not that it matters much, as I mentioned above there's no point of measuring your performance in this version of Viewpoint based on score. 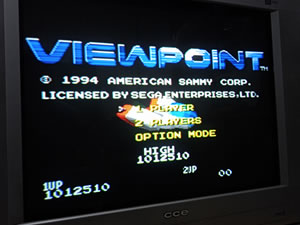