When I started collecting video games, I remember telling myself that one of the first shooters I would try to beat on the Playstation was Einhänder. However, as soon as I got it (US version) for some reason I couldn't play the game for too long. I wasn't hooked enough from the first play sessions, so it was kept on hold for months until a couple of weeks ago, when I finally decided it was time to face it once and for all.

Upon getting back to the action against the Earth (you're a fighter from the Moon, how cool is that?), I finally figured out why I didn't like the game in the first place. It was the music! The music in Einhänder is basically techno and electronica evolutions that do not stand out in any way during gameplay. But then came the day when I turned on the TV with the volume cranked up. I noticed the game got a lot better, and I even started appreciating the soundtrack. So if you feel underwhelmed in a similar fashion, try playing it with the volume adjusted a little bit higher than the way you have it for your regular shmup. It worked for me. 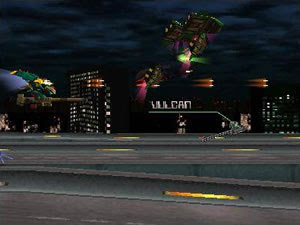 Regardless of music, I do comply that this is a very beautiful game. It's remarkably crafted, with gorgeous graphics, great level design, slick 3D backgrounds and amazing boss confrontations. In addition to that, it also brings something new to the hori-shmup table, in the form of the gunpods you must get from enemies so that you can, well... defeat them. There are lots of gunpods to choose from, and also a bunch of them which are secret and can only be acquired if you reach certain criteria while playing. Therefore, a whole new level of strategy is necessary if one wishes to clear the game with one credit.

From all the ships available for play, in this 1CC I decided to use the Endymion-2, which allows you to carry 3 gunpods at a time but use only 1 of them. After playing for a while, the game let me equip the ship with one of any available gunpods from the start screen, but I went bare handed as it's supposed to be from default. My favorite gunpod is the Grenade, which was used together mainly with the Vulcan, the Wasp or the Cannon, although in some parts the Hedgehog and the Spreader were very handy as well. You can position your gunpod below and above the ship, and each gunpod will behave differently (I was able to unlock all of them except for Juno).

The basics of gameplay I just went through certainly give you an idea of how intricate it is to master Einhänder, and that reminds me I haven't even scratched the surface here. Using any of the other 4 ships (2 being secret ones) will definitely require different approaches, and the unpredictable nature of enemies and bosses will certainly demand a good deal of play time in order to see the real ending again. I say "real" because there's a giant spaceship that must be stopped within a certain time frame in the 6th stage, or else you fail your mission. And that's just a hint of how diverse and varied Einhänder is in terms of game design. From a gameplay point of view, the scoring system awards killing multiple enemies as fast as possible or destroying several parts of bosses at the same time, while giving special bonuses for unlocking the secrets within each level. It's not as easy as it sounds, trust me. 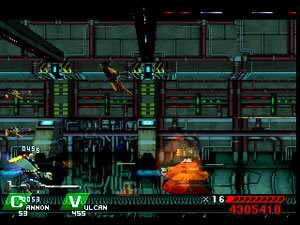 Another interesting aspect of this title is the dark tone of the first stages, which goes against what I believe to be a slight genre convention. In most cases you have first stages that are clear, bright and cloudy, as opposed to very dark and oppressive last levels. In Einhänder it's the other way around, so the ramp in difficulty as you reach brighter sceneries is a welcome addition. It's also really cool that you never see your ship disappear between stages (until the 6th mission), so it all feels like a great big non-stop adventure.

I don't care for RPGs. In fact, I can't even stand to watch an RPG recording. On the other hand, it's just beautiful to see someone playing Einhänder properly. That's a great contrast for Squaresoft, since this is their only shmup in a myriad of crappy RPGs released year after year.

So here's my final score, with no starting gunpod: 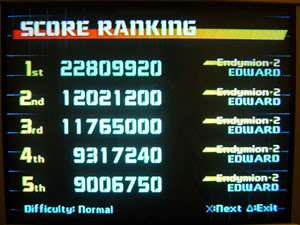