As a shmupper, I have developed certain methods that dictate which and how many games I play. Generally I'll have 3 or 4 different games at hand for instant play - games remain inserted in the consoles themselves and boxes are displayed on my rack to remind me how long it's taking me to win them. Nonetheless it can happen that a particular game decides to give me a serious beating, in a situation that not rarely leads to stress. That's when I'll pull out the "special choice": a game to be played with no specific purpose other than relax and not focus too much on the much desired 1CC.

The "special choice" I had for weeks now was the NES port of Xevious. Now what most people don't know, including myself until very recently, is that this game actually loops. It surely seems to go on and on randomly, but as you play it repeatedly and get hold of the patterns not only you get better, but you also realize there's a defined set of stages/areas to overcome. These areas are separated by a dense dark green forest, in a total of 16. After the 16th area the game gets back to the 7th (the one with the rotating ground turrets in the beginning) and loops forever in this fashion, with no special ending screen whatsoever. In fact, if you're not paying attention you won't even notice you've looped the game. It's also important to mention that all areas overlap vertically in a single giant map (that can be seen here). 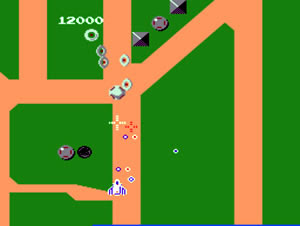 Xevious is heralded as an absolute classic, in the sense that it started the vertical scrolling shooter genre. It was the first of its kind, and it boasted great new features at the time of its release. Besides being able to fire a main shot, the player can also hit ground targets with bombs that can be aimed with the aid of a crosshair. Ground targets can be flown over with no harm, and most airborne enemies will leave the screen if you don't kill them. As you fly over forests, lagoons and enemy bases, all you can count on are the same basic weaponry, for Xevious has absolutely no power-ups! The only icons you're bound to collect are the hidden flags that can be uncovered with your bombs and are worth 1.000 points and an extra life. I read that these secrets supposedly extend to hidden towers, but I could never find any of these while playing the NES game. There are 4 huge boss bases (the Andor Genesis) spread out in the first loop - they cause the scrolling to stop for a while, giving you the chance to bomb them amidst relentless incoming fire.

There's no denying that this game hasn't aged well at all. It certainly delivers in the basic aspects of a decent shmup: smooth scrolling, well implemented collision detection and fierce difficulty. However, Xevious falls short in all the other aspects that make a shooter great. It's clear from screenshots, for instance, that the graphics appear to have only 3 colors: green, orange and blue. The music is the same annoying ringing tone played over and over, and gives you an urging feeling that something is always about to happen - it eventually does, in the form of an utter death blow fired by an enemy craft. It can be truly said that the game offers no variety at all apart from some different enemies that show up in later stages. These new enemies come in bigger waves and fire more and more bullets as you reach the final area, so you'd better be prepared for it, memorizing and killing ground targets as fast as you can. 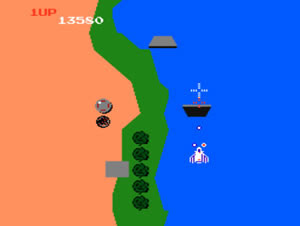 The checkpoint system here is rather original though, and I've never seen it anywhere else in the shmup world. If you die in the last part of an area, your ship (the Solvalou) gets respawned in the beginning of the next area. Since the hardest enemies are always in the last part of a stage, this works as sort of a reward for when you keep yourself alive long enough.

Xevious is the oldest school of old school verts and obviously has its importance in shmup history. New audiences might try it, but enjoying such an old and limited shooter is a whole different story. I'm done with it by reaching area 18 (loop 2-2), so I hereby take note of my puny score on this run: 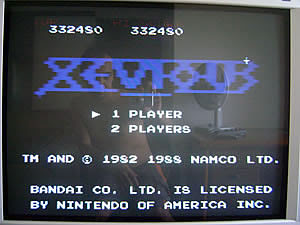