More than any other series in their portfolio, the Cotton games are the shooting flagship of Success, a video game developer whose other important contribution to the genre falls in the bullet hell category (Psyvariar). Cotton, the main character, and their friends and foes appeared in lots of platforms since their inception in the arcade scene, and the PC Engine CD port of the first game was also the first home version to see the light of day. It also holds the distinction of being the only Cotton game ever released out of Japan (on the US Turbografx-CD) along with the port for the Neo Geo Pocket Color handheld.

If you're new to the shmup world (like I was a few years ago), you probably never heard of Cotton. Don't worry though, eventually you will grasp the importance this lovely series carries for both the horizontal and the cute'em up subgenres, especially if you decide to add the games to your collection. With the exception of a very, very rare Mega Drive chapter (a rail shooter!), all other games are relatively affordable - not dirt cheap affordable, but... you know what I mean.

Cotton - Fantastic Night Dreams, the PC Engine CD incarnation, brings us the adventures of Cotton, a red haired witch who's obsessed about these candies called "willows". She'll do anything to have them, even fight malevolent entities who have unleashed a dark mist over the entire world. She's aided by the curvy Silk, the fairy who convinced her to fight. You know, rarely do I delve into the story behind the shmups I write about, but this one is a little different, in the sense that you can set the game's whole language to English in the opening screen (by pressing SELECT). It's sort of nice to finally know what those flashy and exaggerated characters actually say - even though it's most of the time stupid. Cotton the witch does provide for some funny moments, especially after she beats the last boss and gets to Fairyland to collect her giant willow! 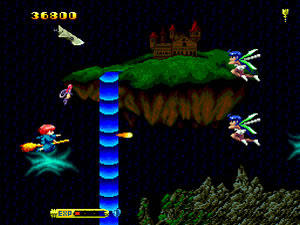 Cotton's gameplay can be overwhelming up front but trust me, it gets more compelling with repeated plays. The main shot is powered up as you collect the proper crystals left by killed enemies. It goes down one level when you die, and is carried out by tapping the appropriate button. When held down and released, this same button triggers one of two types of available magic: the powerful dragon or the longer lasting lightning (magic powers can be stocked up to 4). The other controller button drops bombs/missiles like in Darius, and can also be charged for some fairy special attacks. It's possible to collect more fairies to help you by hitting a certain vase and letting it escape the screen to return (don't destroy it right away!).

The final aspect of gameplay concerns the colored crystals. I think I finally figured out how to work them: red gives you the dragon magic, blue adds to the lightning magic, orange increases your EXP faster and yellow yields points. It's possible to change their colors by shooting at them. These crystals can't be destroyed and always move forward when shot, so don't hurry to collect them! The game is relatively easy, but most of my deaths happened while I was trying to get the correct crystal when I was too close to the right side of the screen. 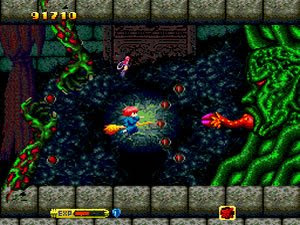 On the graphical side, the game is comprised mainly of dark stages with gothic and sometimes psychedelic figures, with some cool effects here and there. The little amount of flicker is negligible, and slowdown only appears during huge boss confrontations. What should be noted is that it's on the soundtrack department that this game really shines. Lots of people even consider it better than the original arcade music, also present in the Cotton Original release for the Playstation. It certainly is upbeat and truly deserves to be listened carefully amidst the cacophony that results from the louder sound effects.

Again, Cotton on the PC Engine CD is really easy. Don't mind the big hitbox. The game can be beaten in no time, although it will take more runs if you want to really grasp the complete aspects of gameplay. Extra lives are granted every 20.000 points, and the tea time end level intermission (another trademark of every Cotton game) gives you a secret bonus of 20.000 points if you avoid all falling teacups instead of grabbing them. When the game is finished, it politely asks you if you want to "go extra", a somewhat rare invitation to face a second loop. Also be aware that CONTINUES do not reset your score, so be honest to your shmup beliefs. ;)

Here's my final high score while reaching stage 2-5. I could've gotten more, but my special tea time bonus results in this run were hideous... 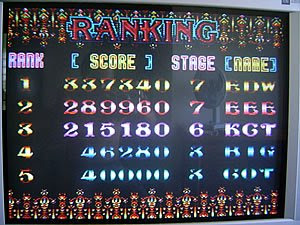