It bugs me that the Cotton series received such a weird treatment during the 32-bit era. On one hand, the Playstation received two ports of the first games (including a direct port of Super Famicom's Cotton 100%), while the Sega Saturn was chosen as home for the outstanding Cotton 2 and Cotton Boomerang. Cotton Original (with the long subtitle Fantastic Night Dreams) is a straight port of the arcade game, and is definitely the version to go to if you decide to start knowing the franchise. The PC Engine CD version is just like it with a few number of differences that make the game even more friendly than it originally was. What does this mean? Nothing fancy, it just means Cotton Original is quite an easy game.

Cotton is a cute red-haired witch who's obsessed with a cookie called willow. Her motivation to go through the whole game is to get a giant willow in the end, and in her quest she's helped by the curvy sidekick fairy Silk. Just like its star, the game is loaded with cute, colorful designs that despite being a bit dark still convey what a cute'em up is all about. The "cute" quality here can be also perfectly applied to the difficulty. Suffice it to say, if you have a little brother or a girlfriend who wants to try an easygoing shmup as an introduction to this niche world, hand them Cotton Original for a few hours, tell'em the basics of the game and return a couple of days later in order to check for a completion or even a 1CC. 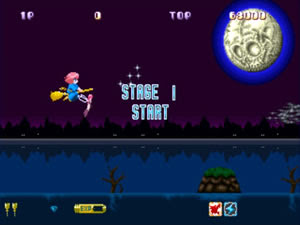 Cotton takes to the skies with her broom for great justice

Some enemies leave colored crystals after being killed. They come in different colors and each one of them has a specific purpose: the yellow one increases the EXP bar and therefore Cotton's firepower; the orange one does the same but it also adds some points to the score; the blue one adds more of the lightning magic; and the red one adds more to the dragon magic. The crystals can have their color changed by shooting at them, but eventually they will disintegrate if you keep shooting them too much. Little helping fairies can be acquired by hitting the floating vases.

You have one button to shoot and one to drop bombs. Normal attack is performed by tapping, and magic spells by charging. Charging the shot button activates the first magic spell in the queue, so depending on which icon you have you get a fire dragon or a forward lightning bolt. Charging the bomb button will send all fairies forwards for a light attack. Charging both fire and bomb buttons will combine the magic items with the fairies for two alternate spells: lightning results in a bubble that grants invincibility for a short time, and dragon turns the fairies into balls of fire that home on all on-screen enemies except bosses.

Upon beating the bosses a teacup shower (teatime!) will provide some bonus points, and the trick here is to dodge all of them in order to get a higher bonus prize. Keeping in mind that it's possible to queue up to six magic items and that both main magic spells serve to block enemy fire, there's nothing more to know about the gameplay - just relax as you cruise by crazy-cute-psychedelic scenarios. You can even lean on any part of the scenery, there's absolutely no harm done by that. Beware though not to get greedy with the crystals and go rushing after them, because that's the most common cause for stupid deaths. Also remember that extra lives are obtained with 100.000 points and then for every 200.000 points afterwards.

Cotton Original can be found both in the form of its initial release or as a budget title in the Super Lite 1500 series. It's a delightful and lighthearted game that hasn't much in the way of challenge, but its pleasing artwork (graphical and musical) sure has enthusiastic admirers in the shmup world. I can't say I'm one of them, I think I need to try later chapters in the series to get my blood really pumped up.

Here's my 1CC high score playing in the NORMAL difficulty: 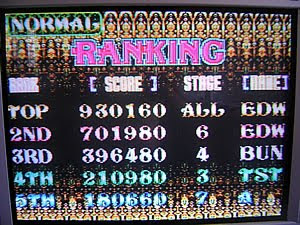