I remember the first day I played Soukyugurentai on my Sega Saturn, during my first weeks of active collecting. I remember I was stunned by the graphics, by the music and by the way the weapons worked. And I thought to myself that I would beat it one day. Fast forward a year and a couple of months and picture me getting to the 5th stage's boss after just a few plays and thinking "OK, this is not going to be so hard... Just a couple more runs and I'm done with it". Can you imagine how wrong I was? I bet the people who already ventured into the 1 credit clear on this game would get a big laugh of me if I had said it out loud...

Soukyugurentai was made by Raizing, the guys behind Battle Garegga's fame. Suffice it to say, Garegga is a game that always instilled fear into my naive shmupper heart - I never actually played it, but I read about it so many times that I can't help but feel scared to try to beat it and see myself in the same situation of my gripe with DoDonPachi: helpless, useless, a wreck of a player who's owned by a game instead of owning it. With Souky, however, I felt confident enough to face the challenge and so I did. I had to have my first Raizing 1CC. I chose one of the 3 available ships (the red), I learned how to use the "web" net and the bombs and I tried to get a hold of the enemies and bullet patterns, all those things we do when we try to break a regular game. Ahn... did I mention I was naive?

This game seems to be easy at first, but then... I died and died and died so many times I had to leave it aside for a while before turning it into my lunch shmup. 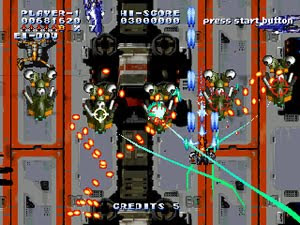 This game is known in the west as Terra Diver, which was its name in the arcade. I don't know if this is actually true, but the Sega Saturn version is considered to be arcade perfect. It's a beautiful yet very dark title that is graphically on par with masterpieces like Radiant Silvergun. Damn, sometimes it feels like Silvergun, and maybe that's due to the music composer being the same for both titles. That's when the similarities end though, for Souky is a fiercer and faster experience instead of a methodic and epic adventure. Of course a good knowledge of the gameplay is necessary for anyone to succeed, but it demands more if you want to play for score. Take the main weapon, for instance. You won't go very far by using it. For maximum score it's mandatory to kill everything with the "web" weapon that locks onto enemies and comes in two variations for each ship. Every enemy that's caught inside the range of this web will be hit by a sort of homing laser/burst as you release the web button. All ships have a weaker and a stronger web (usually the trickiest to use), and each ship can lock onto a certain number of spots (6 to 8). The more lock-ons you have when you release the web attack the highest the multiplier (maximum of ×6 depending on the ship). Locking on to just 1 or 2 enemies will give you a reducing multiplier (!) of ×1/2, so the game forces you to lock on as many enemies as you can. Trying to play without using the web is out of the question, since some enemies are in different planes and can only be damaged with this type of attack.

The bombs work in different ways, according to how you have the web activated. Bombing with no web releases the powerful cluster bomb. Bombing with an active web releases a series of smaller bursts surrounding the ship. Regardless of the way the bomb is deployed, it always works with panic function and makes you invincible for a short period of time. Bombs and power-ups come in capsules that have to be shot, while extends are given with 3 million and 6 million points. At the end of the stage a special bonus is awarded for enemy wipe-out. The percentage shown is the % of enemies you didn't destroy - a perfect destruction ratio will give 0% and 300.000 points, with higher % ratios giving increasingly smaller bonuses. The most important thing is that shooting down all enemies, not dying, powering up and not bombing will increase rank in such a way that every part of the game has to be mastered, especially the boss battles. 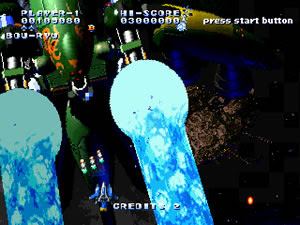 I truly think that it's during the boss battles that this game achieves a peak of magnificence. We're talking about a beautiful game here, where most of the boss fights are nothing less of epic. At times the screen zooms out so that you can actually see the whole scope of their attacks. They all fire huge and varied shots/bullets/lasers/beams/flames that call for perfect maneuvering and deep knowledge of their patterns. Here's a special nod to the 3rd boss, one of the most annoying and unpredictable mechanical beasts I've had to deal with in my entire shmupping life. Sincerely, I hate him.

I don't believe I have actually mastered everything that I could in Soukyugurentai, from strategies for better use of the web weapon in some specific parts to milking bosses and destroying all their bit parts. I didn't have the patience, for instance, to properly kill the 5th boss. I just bombed his first form when he started spitting the staggering vulcan shots and then shot his core to death. In some places, as in the asteroid area of stage 4, you can touch the rocks and big enemies without dying, but there are times when targeting enemies with the web is just too much to handle, so the regular shot comes in very handy. Using different ships requires a totally different approach for each, and my favorite was always the faster Swordfish (red). The Mackerel (blue) and the Scallop (green) have different power/speed levels and lock-on limits.

The version I played is called Soukyugurentai "Otokuyo", a special edition that corrected some bugs found in the original release when it was played in western consoles. It comes with a demo of the 1st stage of Battle Garegga. There's something you have to deal with when playing the Saturn version though: all messages in the game are in Japanese, including the options. That's why I decided to make a treat when I photographed my high score, translating everything for future reference. 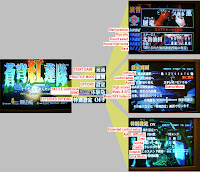 I didn't get to mess with the extended options after unlocking them, but I heard it's possible to do things like controlling the zoom while playing and mapping shot and web attacks to the same button. Since that's way out of the default league, I thought it would be better to keep it simple! And here's the 1CC high score I got on difficulty 5 (Arcade). 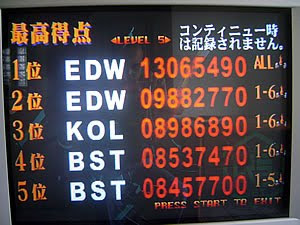