The universe of BlaZeon is a lazy one. This laziness starts with game presentation, continues within the gameplay itself and ultimately castrates your sense of accomplishment after you reach the end. It's probably the most representative example of the term "snooze-fest" in the shooter genre. If the extremely slow pacing wasn't snoozy enough, I also have to mention that I've never seen anything that comes close to it as far as dead spaces go.

Any shooting game that has one or two giant robots in the cover is automatically ranked above its peers for the sake of coolness alone. Having a spaceship transform into a powerful mecha is indeed one of the foundations of BlaZeon, and represents the game's core. Execution in this SNES port of an arcade title is, however, as poor as the widespread fame the console has for being slow when compared with its competition, the Mega Drive. The problem is that the game seems to run in permanent slowdown, with an incredibly tedious scrolling speed that's borderline choppy. Add to that several moments where absolutely nothing happens - you can pretty much go to the kitchen for water or to the bathroom and get back to the game and still wait some seconds for an enemy to show up. Honestly, the first time this happened I thought the game was bugged or something like it. 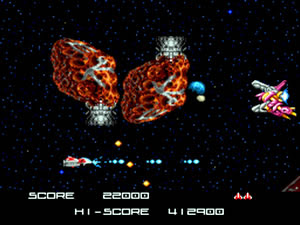 When you start the game you feel like you've been thrown into R-Type. The main ship, the "Garland", is very close to a perfect reproduction of the original R-9, while the first wave of enemies appears exactly like the first incoming wave in Irem's classic shooter. One button in the controller is used to fire, and another one to shoot the so-called "Tranquilander", a projectile that freezes certain enemies and allows the player to take over their forms and abilities by flying over them. Some of these enemies or "bio-cyborgs" require more than one Tranquilander to be frozen, and they all vary in firepower, speed and special attacks, which are deployed by the button used to fire the Tranquilander and are not available depending on the possessed robot/ship. They have their firepower reduced when hit (or when frozen after being damaged) and revert back to the original ship after taking the last possible hit. With only one exception, their hitbox is huge and requires careful maneuvering in tight spaces. And, of course, some robots are more useful than others in certain parts of the game.

You have to unconditionallly love the robot theme if you want to go over the boredom that plagues BlaZeon. Those who consider the lack of action an inadmissible characteristic in a shmup should stay away from it. Speaking of challenge alone, there's not much I can mention besides the slow speed of the Garland, a couple of claustrophobic passages and some mid-boss confrontations later in the game. The only help you have are two extends that are given with 300.000 and 600.000 points only. There's the motivation to kill the bosses as fast as you can, because this yields a better bonus - no points are given if you take too long to destroy them (point blanking is a must, and don't even dare losing the bio-cyborg when fighting the 4th boss!). Maybe the developers thought it was enough of a reward to grant the player with one million points for completing the game, instead of actually including a proper ending. You just get resent to the first level in a higher difficulty, which is signalled by a different color for the Garland and the robots. Talk about a cheap port, huh? In contrast to that, every boss fight is preceded by a ridiculous message that babbles about bullshit and tells us how much effort went to, well... establishing the overall mediocrity of the game (see pic below). 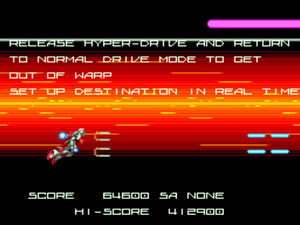 Animation on the bio-cyborgs is very poor or inexistent, but at least some backgrounds and parallax sections are decent. The music does get better towards the end, to the point where it almost gets enjoyable to cruise open space while waiting forever for some kind of action. But when you are in the last stage and see three big chunks of moving background walls scroll past you, with absolutely no hint of enemy spacecraft, it's impossible to believe the damage in this game can be actually fixed. And it just isn't. For a similar and much better mecha shooting fix you can always go for Android Assault on the Sega CD.

I'm glad this game is past me, and here's the high score I got (NORMAL) when I reached the second stage of the second loop: 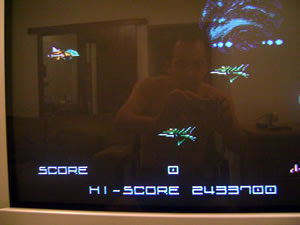