A few days ago I was driving home for lunch when my car was hit and had its rear bumper displaced (at least it wasn't as bad as when my previous car was completely trashed in a similar accident in 2004). The following day I took the afternoon to look for a decent repair shop to fix it, and left the car for the necessary works before lunch. The shop was relatively close to my place, so instead of waiting there I just went home to spend those couple of hours in the comfort of my living room. "So what can I do to kill time?", I asked myself, and thought of relaxing with a good old game I had already mastered, just for the fun of it. The choice was Choplifter, one of the best games you can get for the Sega Master System.

Choplifter is definitely one of my favorite 8-bit shmups. It makes remarkable use of the 1 Meg space in an adaptation of the arcade original, which in turn was inspired by the famous Apple II game released a few years earlier. It's a fluid, relentless little game that combines shooting with some strategy in a flawless manner. You pilot a helicopter that must rescue hostages in several environments, taking them back to a hedquarter base. Addictiveness starts with the simplicity in the controls - one of the buttons is used to fire, and the other to turn the chopper around in 3 positions: left, right and facing the screen, from where the regular fire becomes a bomb dropper used to kill tanks. The chopper will tilt forwards and backwards as you move around, also tilting shot direction, and if you try to land while tilted you'll die. To rescue the tiny people you have to hit the enemy building, land to allow them to board and fly back to base to drop them. In the SMS version you can carry 16 hostages at a time, and when you rescue at least 40 you'll advance to the next stage. If you manage to rescue these without killing any hostages, regardless of lives lost, you'll be rewarded with 100.000 points. The hostages will be killed if shot or when you land the chopper right above them as they flee their prison, run around and wave. 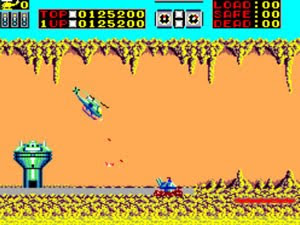 Beginners generally find controlling the helicopter a bit difficult. That's understandable, since scrolling is the player's responsibility and the implemented physics (such as incorporated momentum) demand good coordination to survive. However, after learning how to fly, land and move about the game becomes a blast to play. There are 6 stages and, while the last half of them are repetitions of the first half, the 4th stage happens during the night. The desert in the 1st stage is the easiest one, followed by the ocean battleships of the 2nd stage and the caves in the 3rd stage. During further loops the situation between the 2nd and 3rd stages is the opposite, since those out-of-nowhere missiles in the ocean level are almost impossible to evade and appear more and more frequently. There was an instance where two of them hit me consecutively right before landing at the base with 16 hostages in the second loop. Seems unbelievable, huh? Yeah, tell me about frustration...

That doesn't mean Choplifter is unfair. It's actually too fair in the sense that there's no considerable increase in difficulty as you clear loop after loop. Today I find it extremely easy to go on and on. Aircrafts are only a bit more aggressive (some of them will attack while you're delivering hostages) and those dreaded missiles can definitely be a pain. Gone is the fuel bar meter from the arcade version, and every stage starts with 3 lives, even if you manage to complete the previous one on your last life. When 20 hostages are rescued an extra life is granted for that stage. Pressure rises mostly when you die carrying 16 hostages, because killing 25 of them means immediate GAME OVER (after all, there are 16 POWs per enemy bunker, with 4 bunkers in each stage). That's why it's good practice to pick up only the necessary number of prisoners to complete the stage when you're about to fulfill the quota of 40 rescued - dying with a packed chopper brings you closer to permanent death. 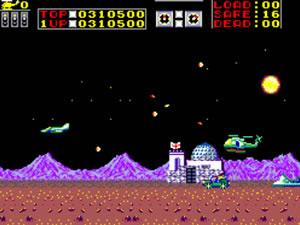 Here are some simple yet effective secrets and tips:
Occasional bursts of slowdown and a little flicker here and there do not take away the immense fun Choplifter for the Master System is able to provide. The graphics are great and the music is incredibly catchy. Believe me when I say this game deserves to be included in every SMS or shmup collection out there. It would be interesting to see a proper sequel made in the same fashion as this port (the NES port is really bad, while the SNES Choplifter III is more beautiful but less dynamic). 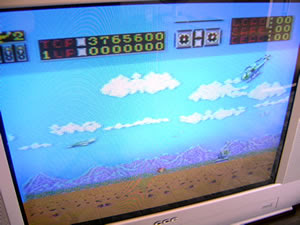