So here we have it, one of the classic milestones of the shoot'em up genre. It is indeed one of the most influential shmups ever created, a game that undoubtedly defined trends and paved the way for later titles in the genre. Shmupper or not, if you never heard of it then you're probably too young or you've been in suspended animation since the 80s. On the Sega Saturn, Gradius is one of the two titles available in the Gradius Deluxe Pack compilation (the other title included is Gradius II), and by all means represents a faithful conversion of the arcade game, down to the original screen format (a bit narrower than the fullscreen 3:4 ratio) and inherent slowdown. Therefore, it's one of the best options in order to have the original experience at home (the other is the equivalent Playstation version).

It's not hard to understand why Gradius was so successful. The main reason behind that was obviously the innovation in how power-ups were applied to the Vic Viper, a spaceship that starts its journey with just a pea shooter and almost no speed at all. Killing a complete wave of small drones or differently colored enemies releases an orange glowing icon that, when collected, shifts the position in the power-up bar/array (the occasional blue icon works as a smart bomb). Pressing the power-up button causes the corresponding lit array position to be activated, thus enhancing Vic Viper's capabilities. The array is cycled through speed, missile, double, laser, option and ? (shield), and some of these enhancements can be activated only once (missile) or as long as needed/wanted (speed and ?/shield). Double and laser are alternatives to the main weapon: double will add a 45° forward shot to the normal firepower but cut its shot ratio in half, and laser will replace it with, well, a laser beam. The "option" adds a glowing orb that follows the ship around and mimics everything it does. Up to 4 options can be activated. 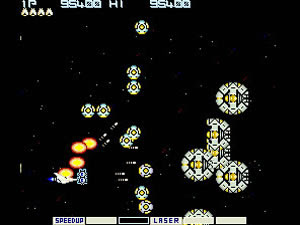 Other reasons for the Gradius legacy of coolness are the now classic music tunes, the unforgettable stage design and the way difficulty was handled: it is directly proportional to the number of options you have, so activating more options means faster bullets coming your way. As you reach the end part of the game though this doesn't make much difference, and dying in certain areas might encourage you to give up and start over again - no matter if extra lives are granted with 30.000 points and then for each 80.000 points after that. The truth is that Gradius isn't as brutally punishing as R-Type, but it's very hard nonetheless. Those pesky bullets that every single enemy ship shoots before leaving the screen are a nightmare, since the shield only protects you from bullets coming from the front! Yes, the game is old, but make no mistake, it will demand time and patience to be won.

I think Gradius has aged fairly well despite its (by today's standards) shortcomings. There's a same boss for five consecutive stages, the now legendary Big Core, and some of these stages can be considered somewhat stiff and a little unbalanced (stage 4 is already a nightmare with four options, stage 6 is easy and stages 5 and 7 are impossible if you die). However, they all feel very distinct and chapter-like, even though you just keep on flying between stages after the scenery fades. Practically all enemies and motifs reappear in the sequels, and from all of them the only theme I really don't like is the area with the Moai heads. People in general tend to like them, but I'm so glad they were left out of Gradius V! 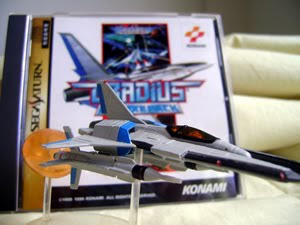 Just how much Konami did it right when developing Gradius can be measured by how many sequels or related games were released afterwards. Almost all of them used the same unmistakable structure for the stages: a brief introductory section where you can collect power-ups (the "pre-stage"), the main stage itself and the boss fight. All sequels do it, the Salamander series does it, and Parodius games are nothing more than Gradius taken to wacky heights.

The Gradius Deluxe Pack has an animated intro, and Gradius itself can be played in 3 screen modes (arcade, arcade zoom and full frame). Upon beating the game a special mode called NO WAIT is added to the title screen - it eliminates the original slowdown completely! In the puny high score I got in the picture below (NORMAL) I managed to no-miss the first loop, but that's no refresher when the game starts again. You restart completely stripped down, which makes matters worse due to the heavily increased difficulty! By the way, this time I was able to reach stage 2-2. 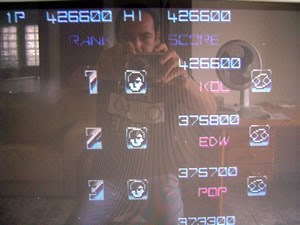