Time for another old school classic!

Chances are that if you were in an arcade joint around 1991 you most certainly were exposed to the almighty Raiden machine, an extremely successful vertical shooter that spawned an equally successful series. I clearly remember seeing and probably playing one or two credits in it. Later on my further contact with the game would be on the Mega Drive port, and after having my way with one of the PC Engine versions I realized it was time to play the most faithful existing port, which is the Playstation one present in the Raiden Project compilation.

Since every other console port I knew was checkpoint-based, I thought that the lack of checkpoints in the Playstation/arcade game would make it an easier ride. How naive I still find myself to be sometimes... Taking the same style that Toaplan developed a few years earlier, Raiden puts the player to fight against a series of threats that have the nasty ability to fire deadly aimed shots at you. The journey starts on the shore and continues inland, going through distinct environments such as a naval base and rocketing into outer space for the last 3 stages. The difficulty slope is one the most balanced I've ever seen, which makes every stage a particular challenge on its own and definitely lures players to come back in order to refine strategies and, ultimately, blast off that huge last boss. 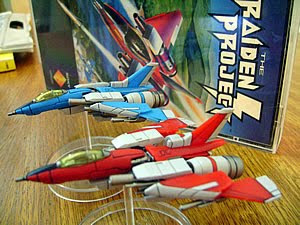 On the gameplay front, there are two main weapons in Raiden: the vulcan (red) and the laser (blue). The vulcan has great spread range but is weaker, whereas the laser is concentrated but far more powerful. Destroyed specific carriers release power-up icons, which cycle in color so that the player has the chance to change the weapon if needed. Orange ground buildings release icons for missiles, where M represents the more powerful straightforward ones and H stands for the homing green missiles. It takes 8 power-ups to maximize the main weapon and 4 power-ups to maximize the missiles. Occasionally a P icon will appear, granting instantaneous maximum firepower for whatever weapons the player is using. Bombs will detonate after a brief delay, nuking their target and nullifying bullets inside their radius. In the end of the stage, the number of bombs is multiplied by the number of flags collected × 1.000 for a special bonus. Sometimes a flag might be replaced by a miclus, Seibu Kaihatsu's mascot, a blue thingie that's worth 3.000 instead of the regular 1.000 points. Bomb stock is limited to 7, after which every surplus bomb is worth 5.000 points - the same applies to all surplus power-up icons collected. 1UP icons are very scarce, and extends only come with 150.000 and 400.000 points.

In my opinion, the feature that collaborates most to make this a hard game is the ship's fixed speed. It's exceptionally slow, and it forced me to adopt a style of play that involves constant side-sweeping with a certain degree of memorization. It is very common to get hit by something that creeps up from behind or from the sides. Whenever you die you get back to the default pea shooter, which leaves you in a very difficult situation against the enemy forces. Fortunately, there's a secret that helps you power up faster: certain areas of the terrain can be hit, and if they are destroyed a fairy is uncovered. Besides being worth 10.000 points, this fairy will return right after you die to release an assortment of power-ups and bombs in the middle of the screen. This works only for one life, but other fairies can be uncovered for another emergency power-up stock (from what I've seen, there are hidden fairies in the 1st, 4th and 6th stages). This is no guarantee of an easy recovery though, since later in the game the screen is so filled with enemies that timing the collection of all those power-ups isn't an easy thing to do.

And let's not forget about rank! Sometimes I feel I can manipulate it by changing weapons in the 2nd stage, starting with the laser and then switching to vulcan. It doesn't seem to work every time though.

When talking about Raiden, most people remember the little cows seen from above during the 1st stage. It's a graphical detail that showcases how much care was put into the game. Certainly the graphical side might be a little underwhelming by today's standards, but its awesomeness was undeniable back in the 90s. The now classic soundtrack is unmistakable for shmup fans, who generally forgive the repetition of tunes. Well, I do. Plugging the controller to the second console input activates play with the second ship, but the blue color isn't the only difference. Enemy placement and quantity is changed, making the game generally easier and more manageable. I don't know how the game behaves in co-op, since I had no chance to play it with a friend. I do know that when one of the players shoots the other player's craft, a series of extra bullets is fired from the second ship. It's a cool effect, but it sort of overloads the players' perception during busy parts.

The western release of The Raiden Project has a large package that resembles the US Sega Saturn titles. The game's got a great animated intro and comes with some nice features. Besides offering support for TATE both for Raiden and Raiden II (EDIT SEP-2013 only by means of a cheat code via a Gameshark device: 80050BAC 0003), it's possible to select between the classic or remixed versions of the soundtrack, and also to adjust the vertical position of the displays for score and bomb stock. High scores and settings are properly saved.

I was able to reach loop 2-3 in my best run on COLONEL difficulty (NORMAL), playing with the original mk-II ship (red). 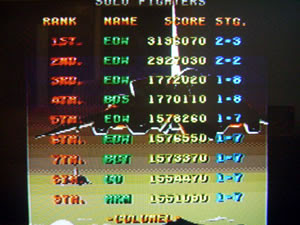