Ask anyone who was around during the launch days of the Mega Drive/Genesis about the most disappointing and lackluster shooter - or game for that matter - of all the initial titles available for the console. I bet my copy of this game that 9 out of 10 answers will be Super Thunder Blade, which was supposed to display the superior 16-bit graphics in an action-packed adventure based off the arcade hit from Sega. However, it left a legacy of disaster that unfortunately haunted the Mega Drive for years as a platform that could not do decent scaling.

The most surprising thing for me this weekend was to find out that Super Thunder Blade isn't an arcade port, being actually a pseudo-sequel to Thunder Blade. That means it is an almost completely original game. It isn't 100% original on the account that all stages are somewhat "based" on the arcade game, sharing most of its 4 stage themes: city (1st), caves (2nd) and factory (4th). The 3rd stage is changed from a jungle to the open sea, and works as a nice breather from the claustrophobic action inside the caves. From the few footage I've seen of the arcade version, I can pretty much say the Mega Drive game is a lot harder. Blame it on the awful frame rate and the slow moving speed of the helicopter! 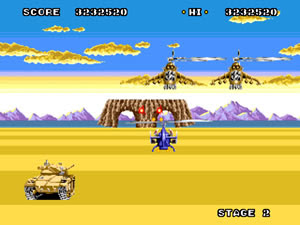 Stage 2 - flying through one of those two holes in the mountain without stopping is easier said than done!

Playing Super Thunder Blade is a matter of keeping the A or C button pressed at all times and slowing down with the B button when necessary (for those who don't like the reverse control for Up and Down it's possible to change this in the OPTIONS screen). Landing the helicopter will stop game progression while a TAKE OFF message will warn you to move on. The top-down initial parts of each stage were removed from the Mega Drive game, but all stages now have mid-bosses where the screen stops. At the end of each stage a boss fortress must be faced in a vertical top-down style, with the chopper being fixed in the bottom of the screen and able to only move sideways, going up at a snail's pace. The B button will make it stop and fly backwards, but this won't help much when dozens of turrets fire at you at the same time. And soon you'll find yourself keeping displacement momentum according to the enemy fire rate - something you'll rarely see in any shooter out there, believe me.

No excuse can be given to how badly Super Thunder Blade plays. It is atrociously programmed and poses another level of challenge to those who decide to face it. I am a masochist, so I had to see it till the end. I was helped by the somewhat numerous extends: first one with 500.000 points and another for every million after that. I had to hone the skill to use the B button to avoid dying against the spikes of the 2nd stage. And this is taken to the extreme during the last stage, where flying above, below and between the pipes is a must in order to reach the last boss. He's not like the previous ones, where flying past them is enough to win the stage. It must be completely wiped out, green turrets and all, if you want to see the ending...

Last words of advice: when hovering, you can graze walls unharmed; when flying, it's impossible to crash against airborne enemies; never hover in front of an up close enemy though, it will be impossible to avoid its fire.


Strange as it might be, the music in Super Thunder Blade is actually very good, making a weird counterpoint with the awful gameplay, to the point of really getting my blood pumped for action when I'm playing it. The awesome revolving alphabet of the screen for high score initials is impressive, too bad it isn't an in-game feature.

Not everybody considers rail shooters a part of the shmup culture. Well, I do. And having cleared a game like this gives me a strange feeling of accomplishment, because I know very few people will have the will to endure the same mission. I can assure everybody it's not an impossible one, it's just... unique in its awkward nature. Here's my final score on NORMAL, for due reference: 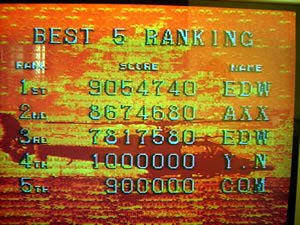