I'm a materialistic person. I like the feeling of concreteness, the awareness of being able to touch something. I believe what my eyes see and what my logical sense regards as truth, and that applies to gaming as well. Until recently I had a strong grudge against downloadable games. I would not download or play them at all despite having all resources at hand, and I kept thinking of all possible downsides of dealing with virtual media - availability, longevity, support, ownership - while avoiding them as if they were the plague. But guess what? I changed my mind. And to start my path towards virtual enlightment, what could be more appropriate than a free game, one that can be had for no money provided you have an Xbox 360 and an Internet connection? Aegis Wing is the answer.

The story of this game is an odd one. The core material was all developed by three Microsoft interns during summer time, being later polished by Carbonated Games for proper release, probably as a flagship of the possibilities involving Xbox Live Arcade. It has remained there as a free download ever since, but only for the North American market. That's not such a problem for people living in other continents, since it's perfectly possible to bypass these stupid region restrictions with a little bit of research. 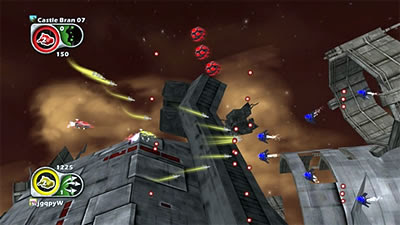 Simple and straightforward, Aegis Wing has completely old school gameplay. Kill everything, no need to worry about scoring mechanics because there are none. The absence of intrincate features is an indicator of the game's humble origin, but it doesn't mean it's devoid of any fun factor. There's no hectic dodging or overly flashy explosions, but the laid back tone is perfect for a gaming session where you don't want to concentrate that much on what you're doing. And if you've got a shmupper friend, join him/her in multiplayer and attach ships to unleash some neat firepower. I haven't done that and I can't do it online because I refuse to upgrade to a gold membership, so my experience was restricted to single player only. In this mode, that tiny smoking ship has only one main weapon, a pee shooter that can't be powered up and has a limited (although not useless) autofire rate. The only power-ups available are limited special attacks that come in four flavors: heat-seeking missiles, laser beams, EMP bursts and temporary shields. Each icon gives 4 of these attacks, which are only cumulative when you take icons of the same type. Since you can stock only 8 special attacks, if you have 6 in stock and a new icon is approaching feel free to fire away 2 of them before getting the replenisher.

It's possible to change the color of the ship every time a stage starts, and this color change is also applied to the special attacks. One interesting aspect of the game is that stages 2 and 4 have no bosses. Even though you're informed of your shooting statistics when a stage ends (shots fired, enemies killed, destruction ratio) there are no related bonus points. When I tried searching for scoring techniques online I came accross a few exploit tips that pointed to some time consuming methods of getting high scores, basically involving the milking of rocks and popcorn ships from bosses. I believe this was doable during the time the game was released, but it just doesn't work anymore. Enemies or debris yield absolutely no points during boss fights. This is wonderful because it provides for fair high score competition. Too bad the online leaderboards are cluttered with inflated old scores.

Experienced players and sci-fi geeks might identify some references and homages during gameplay, and I've got my own impressions to share. The first one is the graphical resemblance to Border Down in most of the background art. If you've already played G.rev's awesome shooter then you know what I mean. Another reference appears in the design of some bosses, which is definitely inspired by the sentinel creatures of the Matrix movie series. They all have that same organo-metallic aura in the way they move. The EMP burst special weapon is also akin to Matrix stuff, even though you can't use it on bosses. I would even say the Matrix reference extends to bit parts of the epic soundtrack, in evolutions that could've been composed by Don Davis himself.

Aegis Wing is an easy game, with a rather limited range of enemies. What makes it easy in the NORMAL setting is the fact that you always start a stage with 5 lives, independent of your stock when finishing the previous stage. However, in the HARD setting (dubbed "INSANE") you're only given one life per stage, which means one life per credit. Each life has a health bar that can withstand 3 hits and is refilled by the cross icon - collisions are fatal though. Performing well in any of the available modes is a matter of learning how each special attack works (the laser is able to crush indestructible mines, bullets deflected by the shield can damage enemies) and how to tackle each enemy/boss pattern.

So here's the high score I got on NORMAL: 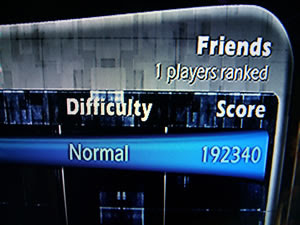