And that's the narrated (and subtitled as is) introduction to Darius II on the Sega Saturn. It's displayed as the Silver Hawk approaches the surface of the sun, against one of the greatest BGM intros ever composed in shmup history. From the many existent home ports for this game, this is one of the titles that preserves the intro from the arcade (the other being a deeply hidden PS2 version), a treat that makes that special rush provided by the games we love the most even more special.

I have a tendency of turning back to a Darius game whenever I have the chance. On the Saturn, I always felt my high score in this particular chapter could be improved, and this time around I aimed at nothing less than the 1-life clear. And those who have played it a little will concur when I say this is no easy task. Forget about the cakewalk of previous games and ports, this is where the series pulls its claws and delivers some serious, hard as nails challenge. There's no wimpy spacefish this time, all bosses from the 4th stage on are tough bastards ready to take your Silver Hawk down. 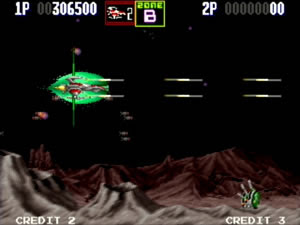 Bringing the 2-screen experience of the arcade game to a home console just wasn't feasible, so Taito came up with a gimmick for the Saturn port. While the regular view is close to a widescreen presentation in order to replicate the arcade feel, several degrees of smooth zooming can be achieved on the fly by using the shoulder buttons on the controller. In a neat and impressive effect, it's possible to see all sprites up close when zooming in to the fullest. However, doing this causes the player to lose sight of what's going on ahead of him, while the screen will wobble considerably when moving horizontally. I's cool for showing off, but not the least acceptable during a serious credit. That's why the game should always be played in the default zoomed out aspect ratio for maximum scoring/survival purposes.

Amidst all the main shot, bombs, laser and shield power-ups you need to collect in order to be able to deal with the increasingly harder enemy waves, in Darius II for the Saturn weaving through bullet spreads and claustrophobic passages is turned into an exercise on methodical gameplay. Every stage demands profound mastering if you want to get through it without a single hit. The vulnerability feeling you get when you lose the precious shield in later stages is unparalleled, simply because the danger lies in every little corner of the large playfield. Popcorn enemies are the worst menace, they sweep by so fast and shoot so relentlessly that escaping the swarms with no shield requires stunt after stunt. The slow speed of the Silver Hawk is designed for minimalist dodging as opposed to wider displacement streaks, and is actually the one to blame when you think about where the high level of challenge comes from.

Another aspect of the game that influences difficulty is rank. I thought it wasn't that important until I managed to consistently pass perfectly during the N stage while still getting a few hits from boss Leadain. Now here's what I found out: in this stage there is a bomb/missile power-up just before the turtle captain. Take it and you'll face a harder Leadain. Miss it and Leadain will give in easier. This is a fact, I assure you. And this slight reduction in rank seems to cascade to the next stage and the battle against Grand Octopus, another hard beast to dispatch. In any case, rank is only reset when you die, but unless you are in the last stage it's pretty useless to continue playing. Unless you get totally in the "zone", Mr. Octopus will surely deplete your life stock as if you were an insect.

This port of Darius II is a very polished one. Presentation is flawless, with negligible loading times and absolutely no slowdown (at least while playing alone, I didn't test co-op play). The HUD display can be displaced vertically when pausing the game, and different settings for autofire can be used (the best is the default one, really). Besides a few rare 1UP icons, score-based extends are given for every 800.000 points. Playing the game on NORMAL rarely leads to a fully powered Silver Hawk by the time you reach the final boss, but I assume those enemy waves that don't release any power-ups get more generous on an easier setting. But which serious shmupper will do that? Brave ones don't. :)

More than any other Darius II home version, in the Saturn port good positioning and point blanking just can't be taken for granted. Know where to stand. If you're aware that a bulkier enemy will open his guard or refrain from shooting for a while, get right up to his nose and blast him away. These are my two cents of the most important tips I can come up with after clearing the game on 1 life. And here's my final score on NORMAL difficulty (a 5% improvement over the last one), going through route ABEINTY: 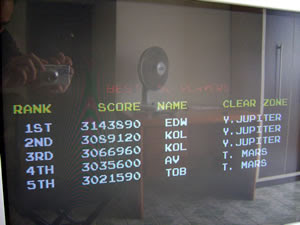