Released exclusively in Japan, this weird shooter isn't what's commonly expected from a horizontal shmup. The original name is Uchuu Senkan Gomora (something like "Spacechip Gomora"), which defaults to Bio-Ship Paladin when the cartridge is played on a Sega Genesis. As with the majority of Japanese games, this one has a great box artwork that immediately keeps you guessing what it will be like even before seeing it. However, experiencing this game is almost always quite different from expectations, simply because it just doesn't fit the norm at all. It's deliberately slow, requires almost no dodging and is renowned for scaring everyone at first sight due to the huge amount of enemies that clutter the screen very early in the game.

That said, this one falls in that often damned category of games that demand more patience than usual in order to be played. Peel off the initial layer and a brave new world will open up for you, that's what I always say. By no means I'm stating that Bio-Ship Paladin will blow you away, the chances are quite the opposite actually. Since I tend to appreciate what's different I do have a small place in my shmupping heart for oddities, so I eventually learned to appreciate the dying pace and even came to enjoy the overall tone of this game. Sometimes we can get tired of relentlessly shooting wide energy beams and bombing everything to shreds, you know? If you ever feel like you need a different kind of shmup mechanic to quench your gaming needs, here's one of my sincere recommendations. 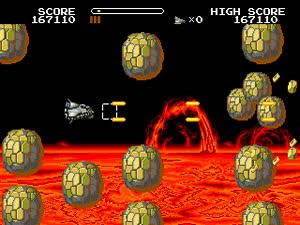 This is so slow I think I can fly through that flame arch and get back for lunch!

Gomora, the player's ship, seems to possess some sort of organic structure because it grows in size according to the extra health it collects. The ship's arsenal is quite varied: the main shot/laser (button A) can be charged for a thicker energy burst. Holding down the beam function (button B) will activate a crosshair and turn the main shot into a beam launcher just like you remember it from the classic Missile Command. Lastly, button C toggles between two types of crosshair/ship movement. Unlike the regular shot, beaming can damage anything in any area of the screen while blocking almost all incoming fire (the only exception I saw were those huge white energy balls). This is where the catch of the game lies: it's not about dodging, but instead positioning and quickly getting rid of all possible threats. Most enemy bullets are very slow and can be cancelled with no sweat. Sure you have to move from time to time, but if good strategy is used the old fashioned dodging we're so used to is only mandatory against a few bosses.

Ship speed is the worst problem once you start to play the game, and in order to boost the engine to a decent degree a couple of S icons are necessary. Power-ups are released by killing a certain wave of enemies, and sometimes they come floating for the player to pick'em up directly. There are instances where a power-up can be changed by shooting at it with the main gun, all it takes is trying. Besides the S for speed-up there are also L for health (which also increases the size of the ship), A for auto beam (not really that helpful) and a special orb that attaches to the top and the bottom of ship in a maximum of 3 on each side (they fire diagonal shots in conjunction with the main gun, additionally protecting the ship as long as they don't take enough damage to disappear). Gomora doesn't seem to get any more powerful when L icons are collected, it's just a matter of accumulating more health/energy and showing that size does matter. Of course getting hit will revert the ship back to its original size before it disintegrates to pieces when the health bar is depleted.

The worst case scenario in any credit is dying during boss fights, because then you get back to the default crawling speed and it gets really hard to evade from boss attacks. And boy, they love to trap you in a corner! Preserving health is very important, especially against powerhouses such as the 3rd boss, whereas memorization is the best aid for success. Knowing in advance when and where large spaceships are coming from represents a considerable advantage against the enemy forces, which depending on the situation can get really overwhelming and kill you by sheer desperation. The resulting slowdown, in this case, is absolutely no help.

Any screenshot should tell how well colors are used in Bio-Ship Paladin, and that's a testament to the decent graphical quality of the game. Stage design goes back and forth from crowded and mildly claustrophobic sceneries to open outer space environments, in a varied selection that unfortunately does not extend to the soundtrack. BGMs eventually repeat themselves, but at least they do the job of mirroring the grandeur evoked by the game's scope, one that's clearly geared towards the colossal clash between huge warships - namely yourself and the bosses.

If the whole game moved at a faster pace (as it does in the original arcade version) it would definitely be a killer. Since it doesn't, its appeal ends up restricted to shmup addicts or to those who share a minimum connection with the theme. People say playing it in co-op is more fun, but that's probably due to the fact that the game gets easier. I don't have one, but I assume controllers with turbo function on the A button will do wonders for those who find the game too difficult. Against all apparent odds, it does get fun after the player nails how to effectively use the beam weapon.

Every time one credit is started you have to select your options. Bear in mind that continuing doesn't reset the score (perhaps that's why there are no extends whatsoever). My best 1CC result is in the picture below, another proud no-miss run!