When four nations are summoned to avoid a tragic fate to the planet and the concerning game is a vertical shooter, what we have is a semi-classic shmup called Sonic Wings. Two pilots from each country collaborate to bring down the filthy bad guys, but alas! They can't team up with a hero from another country! In fact, in their quest for justice/revenge the player or the team must bomb all other nations to shreds. Why is that necessary anyway? Oh yes... Even if a shmup credit is in most cases very short, it's a good idea to have more than just four stages to go through. So there you have it: blast through all other three nations and take off to complete the remaining four challenges to save the world from total destruction!

Who cares about story anyway? In the SNES, Sonic Wings plays a lot like the original arcade game, so props go to Video System for giving the 16-bit generation a taste of what would become a rule in the vertical subgenre for years to come: fast and dense bullet patterns and an overly aggressive rank system. Say what you will, I think the SNES port is even harder with the rank progression, making it definitely one of the trickiest games to be 1CCed in this particular console - not the hardest, but one that will demand a great deal of patience to be won. So what do you say? Want to try some genuine pre-Psikyo stuff in your 16-bit favorite (or 2nd-to-favorite) system? Just a quick reminder on this: the US release, renamed as Aero Fighters, is outrageously rare and expensive, so you might want to put your hands on the much more accessible Japanese version - as I did. 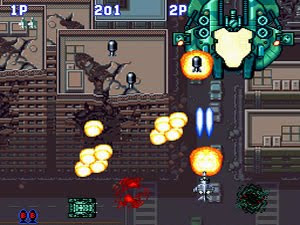 The transition to the Super Nintendo is well done but could have benefited a bit more from the console's capabilities. Surely the graphics and explosions take a hit, but there are several sections with an extremely bland color palette, which carry an overall washed out aspect that's downright depressing. Therefore it’s clear that regarding graphics this version of Sonic Wings has aged a lot. Fortunately the gameplay is intact, so no more severe worries here. As expected, the screen is stretched to fit a regular TV size. Combined with the fact that the game requires some exquisite tap dodging, maybe that's the reason why the whole game feels more difficult than the arcade original.

All characters have unique features such as firepower, bomb and speed. Upon collecting three power-ups the plane is upgraded to its maximum capacity, only to be downgraded after a while so that you have to collect another power-up. If already powered up to the max, surplus power-ups are worth 2.000 points each. Bombs work in the classic way, some of them have instantaneous panic function but are weaker and others are more powerful but come with a slightly annoying delay. After analyzing all characters and ruling out Kohful (the Swedish guy with whom I beat the PS2 port), my choice for alter-ego went to Hien, the Japanese ninja who fires shurikens/knives. He's reasonably fast, and the homing missiles are a nice addition when his plane gets powered up.

Straightforward gameplay with dialogue intermissions between stages are what the game is all about. Autofire is only partially implemented, since each press of the fire button shoots a burst of short duration. There's no need to mash the button like crazy, just tap it calmly for a continuous and efficient fire stream. The order of the first 3 stages is always shuffled, and each one of them will add more enemies/bullets the further they appear in the game. That's our elusive rank kicking in! It's pretty manageable at least until you reach level 5, when getting there without dying will make enemy bullets so fast that avoiding death becomes an extremely daunting task. My main strategy was to die in the beginning of the 4th stage in order to keep things under control. The occasional slowndown is very handy during some hairy boss fights, but don't expect this to happen against the final rocket boss or the final flying monkey. Extra points are obtained through money uncovered from ground targets, and apart from killing every possible enemy that's basically what influences a bit more in scoring. An extend is granted with 400.000 points, and if you’re very, very lucky you might get a random 1UP from one of the power-up carriers.

Sonic Wings was heralded at the time of its release on the SNES for allowing co-op play. However, as I mentioned above, both players get stuck with the same pair from one nation only (not a problem for 1CCers anyway, we always play on our own). When playing solo, pressing start on the 2nd controller allows the selection of the 2nd pilot from each nation instead of the default guys, so there you have some flexibility as far as the options for different airplanes go. It doesn’t matter how you decide to play it, the game is great fun anyways and has that special quality that always makes you come back for more, at least until you can nail the much anticipated 1CC. Note: Aero Fighters (US version) does not loop, but Sonic Wings (Japan) does.

Functionally speaking, in a simple yet very annoying oversight from the developer, this version isn't friendly at all to dedicated players because it has no buffering of high scores and it's just impossible to pause the game after dying. The high score below was immortalized just before I fought the boss with Hien in stage 2-1, on NORMAL. 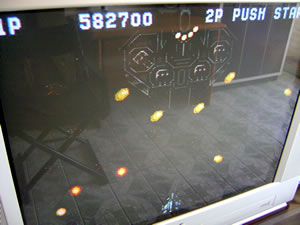