There was a time when I was a Segaphile and I very much preferred the Mega Drive over the SNES. I used to have heated arguments with Nintendo fanboys about it, and those who lived actively through the 16 bit golden era know exactly what I’m talking about. These days are long gone but the memories still linger with a warm, fuzzy feeling. And this brings me to Axelay, a special game in my personal story because it was the one that made me bow down to the hidden awesomeness within the SNES library. This exceptional shmup stood the test of time like few others did, and I still get that well known chill down my spine every time I start playing it.

Konami exceeded themselves when developing Axelay from the ground up exclusively for the SNES. The game extracts the best from Nintendo’s console, being well known for its use of the much famed Mode 7 effect. It was a novelty back then – and a worthy reason for general praise towards the game – but today Mode 7 is also the main draw behind the few specks of criticism Axelay gets. Some people claim it just doesn’t feel right, as I did when I started playing it. However, the core stage design and the overall value of the package far outweighs the cosmetic touches provided by Mode 7. What I mean to say is that Axelay is much, much more than Mode 7, and as a shmup experience it holds the distinction of being an absolute masterpiece. 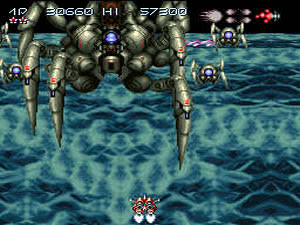 There are some rather unique ideas in the gameplay front. For instance, there are no power-ups or items at all to be collected. The ship can be equipped with three different weapon types every time a stage starts (a new weapon always becomes available in between levels). These weapons can be cycled with the shoulder buttons and work as back-ups for each other: every time the ship is hit the current weapon is lost and the next available one is automatically activated. Once all weapons are lost you’re left with a basic firepower capability - death happens when you get shot while using an empty weapon slot or whenever you collide against enemies, walls or bigger shots. Respawning brings back all three selected weapons again. This is an interesting concept that totally eliminates the main drawback of most power-up based shooters. In other words, dying isn’t nearly as bad as in 90% of the games in the genre. And with so many extends (first with 30.000 and then for every 70.000 points), blaming Axelay’s gameplay for not performing decently is something no serious player should ever do.

Main shot and auxiliary missiles are characteristic to all weapons and are fired with different buttons by default, but fortunately these can be mapped to the same button in the OPTIONS. And that’s it, no more explanations needed! To enjoy Axelay you just have to keep your thumb on a single trigger and your pointers on the shoulder buttons. What lies ahead is mostly getting acquainted with each type of weapon, thereby choosing which combination suits best for each stage. Following the classic mold created in Salamander, orientation changes in every stage: odd levels are vertical, even levels are horizontal. Vertical stages are where Mode 7 is extensively used in order to create an effect of rolling perspective to the terrain. The action, however, still stakes place in a flat plane. The resulting detachment is weird up front, but it never feels gamebreaking. Because of this the horizontal stages do feel a bit more polished and accomplished.

One thing that seems to bother at first sight is how the game forces the ship to stay in the centerline whenever the stage layout is bigger than a screen size. That's the rule in almost 100% of the vertical stages, but at least for me it became natural after a few plays.

What makes Axelay a superb accomplishment in old school shmupping is the winning atmosphere that results from the combination of excellent graphics, music, challenge and gameplay. Visuals and stage/enemy design are top notch, with great ideas everywhere and huge bosses to boot. The music is outstanding, definitely one of the best game soundtracks of all time. If you ever wondered where you could experience the true essence of the shmup genre, look no further: get a copy of Axelay and try at least the first couple of stages. If you don’t like it, my bad - there’s no hope for you as a shmupper. If you do, try to get to the last level (6th) so that you can behold one of the finest stages ever designed in any shmup.

As far as challenge goes, I think it suits all kinds of players really well. Once you’ve mastered the game it will restart in the harder available setting – rumor says it that a run in NORMAL will have 3 loops, with further loops unfolding on HARD and on an extra VERY HARD difficulty. Gameplay involves everything I’ve already mentioned, but those who might value the narrative side of things should also know that there’s a brief intro that tells the backstory of the pilot and his quest for justice. As an odd side note, Konami also allows you to tweak screen brightness if you want to.

Besides being one of the best shmups ever made in my opinion, this is definitely my favorite title in the SNES shmup library. The only one that comes close as of today is Macross - Scrambled Valkyrie, but I would have to revisit that in order to draw a final conclusion. This time my goal when replaying Axelay was to beat my previous high score (achieved +39% ) and reach the 3rd loop (reached 3-4). Here's the result: