So here we have one of the highlights of the Xbox Live Arcade shmups! Omega Five is a twin stick shooter, and with the exception of this gameplay aspect it unfolds much like the classic Forgotten Worlds, meaning you control a flying character who’s able to shoot in all directions as the screen scrolls mostly in a horizontal fashion. This concept isn’t for all tastes, but once you get into Omega Five the potential for fun is unveiled first as you attempt to survive the stages, and later as you start grasping the correct way to use each character and - maybe - get higher scores.

The strongest quality of this game definitely lies in the polished, stylish and flashy graphics. It seems most of the efforts from the developer went to the graphic design, since Omega Five has only 4 stages and leaves you starving for more once it’s over. The game is beautiful, working as a homage to those pure 2D old school full-fledged shoot’em up adventures we all loved so much back in the 16-bit days, with great character design, cool weapons and lots of large enemies to defeat. Since it doesn’t have a proper manual, I can’t tell much about the story. Not that I care about it anyway, after all I play these games to blow up stuff. And in a game that starts against a snowy background and has evil Charles Xavier as last boss it’s pretty hard to concoct any reasonable storyline on my own. 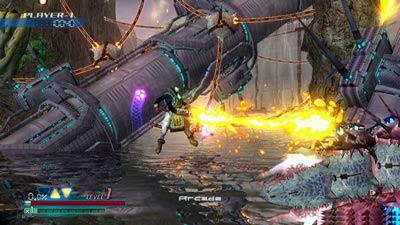 Fire in the swamp!

I think Omega Five is not only a fine shmup, but also a worthy example of a decently programmed game. Casual credit feeders won’t get much of the game, but those who care about 1CCing or winning achievements will be forced (in a good way) to learn it well, and that’s where things start getting interesting. First of all, the achievement list gives away two more characters besides Ruby and Tempest, the default stars of the game. In order to unlock RAD, it’s necessary to finish the game with sexy Ruby (RAD is a faster version of Ruby). To unlock Sensei, you have to finish it with bulky Tempest. And to access extra challenge and retro modes you gotta complete the game in several different ways. Extra credits beyond the initial 3 come automatically with play time, and after 300 minutes free play is granted. One might see this as a way to add value to a rather short game - it’s great to avoid naive newcomers from disregarding Omega Five as “just another lame old-fashioned 2D shooter”.

All characters share the same basics: move them with the left stick or the D-pad, shoot with the right stick. Three weapons are interchangeable with colored power-ups (red, blue and green), with three power levels activated by taking icons of the same color. Defeated enemies leave pink chips behind, that when collected fill up the "ultimate burst" stock (up to 3). These work as smart bombs (L2), wiping all on screen bullets and damaging enemies in the process. There’s also a "dimension field" resource (R1) that makes you invincible for a split-second so that you can escape hairy situations, at the cost of a little health. The health bar can take 6 hits before the character dies, but energy icons will replenish around 40% when collected. And last but not least there’s a special feature to each character, triggered with the R2 button. Ruby and RAD will launch a claw that can latch onto certain enemies and damage them; this claw also blocks regular bullets. Tempest will toggle his red/blue weapons between two different behaviors and launch a homing version of his green weapon. Sensei will send his dog to any lockable target and fire special weapons automatically (a mix between Ruby’s claw and the dog from Shadow Dancer).

While it’s okay to play Omega Five for survival only, learning to chain will lead to a more rewarding experience. The multiplier meter can be filled up to ×10 by killing successive enemies without taking too long between each kill (approximately 1 to 2 seconds, according to the small dial to the right of the multiplier bar). When enemies run out it’s possible to preserve the chain by hitting any bulky opponent with any weapon. The chain is broken when you take too long to hit something or when you get hit. Does this sound familiar? That’s because this is the exactly same chaining concept of the DoDonPachi series! The difference is that chaining in Omega Five is a lot easier and more forgiving. With stage layouts that help a lot and a difficulty level that’s not that taxing, anyone can experience this kind of scoring rush. It’s even possible to milk bosses for high multipliers!

On the surface, it might seem that Ruby and RAD are the best characters of the game, but my favorite one is Tempest. He might be bigger and slower, but his weapons are ultra cool (love the acid/oil launcher - looks great and is excellent for chaining) and he’s also able to slow down bullets and reflect them by ceasing to shoot for a brief moment. Sensei's weapon has no long range ability but it blocks bullets by default, and you can unleash different sword attacks by doing crazy moves with the right stick (including a 360º sword slash). This shows that each character has a very specific set of abilities – even Ruby and RAD differ, in that Ruby’s shot is locked onto the enemy she clutches to, while RAD is free to shoot in whatever direction she desires.

As you progress in the game, eventually you will unlock several extras, including a mode called Arcade++. This special mode plays just like the regular Arcade mode, but here it takes only one hit to get killed. And then it’s GAME OVER, no matter where you are, with no CONTINUES allowed. How’s that for perfection and hardcore? In order to encourage you to try it, in this mode the maximum multiplier is ×30 instead of ×10. How’s that for extra motivation? Now for the only real flaw I see in Omega Five: even though Arcade and Arcade++ are different modes, the leaderboard tables for both are shared! This is stupid in lots of ways, and helped me give up on mastering Arcade++ for the time being. I beat regular Arcade mode with all characters and won 100% of the achievements, but going the whole way in Arcade++ is too daunting a task for me right now.

In a nutshell, Omega Five is a superb game, possibly the most accomplished original shmup on Xbox Live Arcade. It’s tons of fun for casual and hardcore players alike (alone or in co-op), with excellent presentation and a pumping soundtrack to boot. Totally mandatory if you have your 360 connected to the Internet.

I believe I squeezed the Arcade mode quite decently with Tempest, since as of now the 1CC result below is the top score in the leaderboards with him in this particular mode. 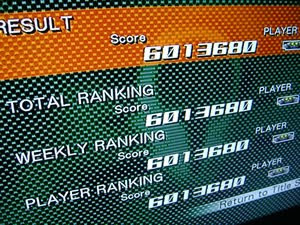