I am into casual games, as long as they're shmups. Recently, casual shmups have been pouring like crazy in the XBLIG section of the Xbox 360 online service. There has been at least one release per week for some time now, and admittedly most of them are quite bland. The most casual of casuals don't really interest me, because I like to dedicate myself to games that have an ending - even casual ones. And again, like it happened a few times before, last Friday I was bored but too tired to dig deeper into a full-blown bullet fest. So I thought it would be okay to give a chance to one of the latest indie shmups I downloaded. Paper Sky seemed to be interesting enough to hold my attention for an hour or so.

In the past there have been attempts at including artsy concepts in the shmup realm, from which one of the most intriguing is Platypus. Following a similar idea, Paper Sky tries to build a specific identity to itself, based on several layers of paper collages applied to both backgrounds and enemy design. It's visually eye-catching (that's the main reason why I decided to play it), but since this is a budget title it's really hard to demand anything more than a hastily made novelty, a passtime shooter that doesn't do anything beyond the very basic in order to leave a decent impression in the audience. It's got a certain value from an artistic standpoint, but it disappoints in the gameplay department and definitely fails on the programming side of things: this is what happens when developers make a shmup without being familiar with simple albeit crucial genre traits. It's about time devs realized that fun doesn't exclude concepts such as performance and competition, and it astounds me how such simple yet extremely effective programming routines are just ignored by the majority of indie developers out there, routines that would otherwise elevate the game above its peers for immediate and - possibly - long lasting fame and appreciation. 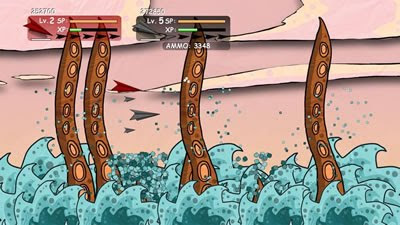 In Paper Sky the craft you fly with is a paper plane, just like the one everybody learns how to carefully fold as a child. It bends as it moves, but the firepower is always directed forwards. Destroyed enemies turn into green dots that get drawn to the plane and increase the XP bar, and when this bar gets full your power level is upgraded. There are five power levels to be reached, but the only improvement you get is that you move a little bit faster and shots get a little bit stronger. The SP bar fills up automatically with time and feeds the special attack, a forward thick burst of bullets I like to call “power fart”. Its primary function is to take out multiple targets in a row. The main shot can be upgraded with two types of items: the double shot and the triple/spread shot. Both have limited ammo and must be refilled for continuous use. Besides that, the game also throws auxiliary option planes that hover above and below the ship. Dying is a matter of taking one or two hits - if the plane escapes death on the first hit it starts smoking, but if you manage to survive long enough it will self-repair.

It’s interesting to notice that when you start playing the first couple of stages seem a bit hectic, but this impression comes from the confusion you get with the green dots that add to the XP gauge. It takes a while until you stop trying to dodge them, and then you realize how empty these stages actually are. Destruction animations are done with flying dot debris and look kinda cool, but you can’t help but feel that the action drags, especially when the scrolling stops and you’re left shooting waves and waves of popcorn stuff. The pace starts picking up only in the sewers of the 4th stage, as well as the challenge. By then it gets important to preserve the power fart stock for a number of reasons: enemies increase in number, parts of the screen become hazardous, bosses decide to give trouble and the game ceases to grant 1UPs every minute or so.

Graphical exquisiteness is great, but again it’s not enough to overcome the flaws of Paper Sky. I enjoy the fact that enemy bullets are all rendered like little worms. Some of the cartoonish enemy designs for each specific stage are charming. I really wish the intensity you experience during the last boss battle was applied to the rest of the game, but unfortunately you’re stuck with snoozing action for more than half of it. It’s so boring that Paper Sky actually takes you by surprise when the increase in difficulty kicks in.

Even though it’s great to see an indie shmup that doesn’t give you the ending on a plate (the game has no continues and no saves whatsoever), it bugs me that the score display keeps coming and going randomly and there’s no high score table of any kind. If you’re not fast enough to pause you won’t see how much you scored after beating the last boss. As expected, everything else in the game’s presentation is bare bones, down to the poor ending screen. It’s a real shame, because I think it wouldn’t take much to add a nice scoring system to the basic idea. Allowing co-op play doesn't count.

I wasn’t able to beat the game on the first day, so I gave it another try on Sunday. Below is the resulting 1CC high score: 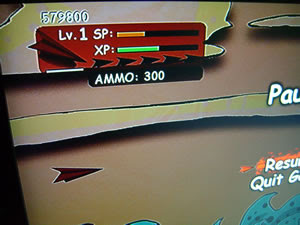