In the huge box the printed name is Raiden Densetsu, but the in-game title appears as Raiden Trad (during the initial loading screen) and also Raiden (during the attract mode). Since this is a port, for the sake of language standardization let's keep it as Raiden Trad. Released for the FM Towns computer in 1991, this was in many ways the most faithful conversion of the original arcade game until the Playstation port came out in 1995. It's perfectly playable in the FM Towns Marty console, and for a few months it enslaved me in punishment as I painfully - but pleasantly - learned my way through it. Pain & pleasure is a deadly combination, one that applies perfectly to what I consider the toughest rendition of Raiden I have ever played. In its default difficulty it even tops the arcade game.

Let's recap the basics: a slow ship, two types of main weapons (red for spread vulcan, blue for straight laser), two types of auxiliary weapons (M for straight missiles, H for homing missiles) and a limited stock of bombs. Weapons are switched/powered up and extra bombs are achieved by taking the appropriate icons from destroyed carriers. Collect medals for bonuses at the end of a stage (bonus = number of medals × number of bombs × 1.000). Eventually a miclus (a blue thingy) might appear instead of a medal, it will count as a medal but also give you a few more points. Uncover hidden fairies by hitting their location, rescue them and an extra batch of power-ups will appear after you die. The maximum number of bombs you're allowed to stock is 7, and all items collected in excess are worth 5.000 points each. Win extends at 150.000 and 400.000 points, get lucky and you might win 1UPs as well.

It wasn't long after I started playing it, there came a time when I thought of giving up on this game. I was being demoralized credit after credit and feeling like shit, and the mere act of getting to the 5th stage was a nightmare. 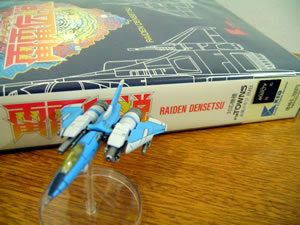 The blue ship has the power

I started picking up details to try and control rank, and finally came down to something: if you stock more than three bombs enemy bullets will soon become faster. But it wasn't enough, I was still getting crushed in the most horrible ways. Then came the first moment of truth, as I remembered that using the blue mk-IIb ship piloted by player 2 resulted in a different game altogether. Simply put, that extreme rank slope is gone when you use this second ship. There's no crazy increase in bullet speed regardless of bomb stock, and on top of that you fight less enemies. It's as if the alien forces underestimate the blue ship, whereas the red ship puts them in a state of constant overdrive. The trade-off is that when you play with the blue ship it's not advisable to activate the laser weapon. Laser weapon with blue ship equals large bomb stock with red ship, and the result is once again indecent levels of enemy aggression.

Using the blue ship gave me a new hope. I was finally able to consistently get past the 2nd stage without dying. Slowly I came down to reliable strategies to navigate the levels and safely deal with all those sneaky snipers coming from the sides. Success seemed within reach and soon enough I was face to face with the last boss, only to find out he was the second and definitive wall in the game (the first wall is the fifth boss). I lost count of how many times I approached him with five bombs only to fail over and over, no matter what type of missiles I had on me. I even killed him once but got hit by one of the last bullets to emerge from the final explosion - if you've ever experienced such failure then you know this is one of the worst feelings you can have as a shmupper. I was devastated.

Provided you're sharp enough and don't die where you shouldn't, the first loop of Raiden Trad takes roughly more than 30 minutes. Since this version has checkpoints, you can practically kiss your credit goodbye if you die while fighting the last boss. It's virtually impossible to recover. I tried a few more times, but eventually it became too time-consuming to do it. Once again against the ropes, the second moment of truth came to me when I decided it was time to learn about FM Towns emulation in order to practice. Therefore I found and installed UNZ (a great emulator by the way) and trained hard with savestates on the most diverse ship configurations. Only when I was able to better anticipate the nasty patterns of the last boss and 1-life the last stage I got back to the console for more serious attempts.

Here's the breakdown of my final game strategy: select blue ship with autofire (done in the start screen), stick to vulcan shot all the way, choose M missiles in the 1st level, switch to H missiles when starting the 3rd level, switch back to M missiles in the middle of the last level (8th), reach the last boss with 5 bombs. Stay sharp, stay focused, don't die in stages 5 or 8.

This version of Raiden Trad is extremely tough, with a huge potential of turning itself into a frustrating experience. Thankfully it never felt like grinding, which is the worst thing that can happen to a relationship between the gamer and the game. Vivid colors, an awesome remixed soundtrack and above all a faithful representation of the original arcade design were decisive in keeping the fun factor always on top of things.

Disregarding the cruel use of checkpoints, this version of the classic loses to the Playstation port because of an inexplicable framerate loss that happens during a large section of the 2nd stage (I suppose it has something to do with the parallax). Also noteworthy is the lack of a TATE option, even though the game looks great the way it is. Besides the regular Arcade mode there are also Competition modes A and B, but beyond some very slight color changes and starting the game with just one life I have no idea of the differences between both.

I have to say this is one of the toughest 1CCs I have ever accomplished. It was a long way until succeeding and reaching the 2nd stage of the 2nd loop (NORMAL). The first loop was cleared with no deaths. 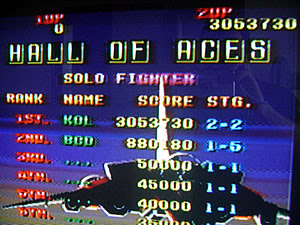