Midgets have turned insects into cyborg creatures and are planning to conquer the Earth. To save mankind from disaster an insect-sized warrior named Yanmer is sent to battle the enemy. That's the backstory of Insector X, a horizontal shooter released by Taito in 1989 and included in the Taito Memories Vol. II compilation for the Japanese PS2 (for the record, the game is also available in the west in the Taito Legends 2 package). I'll be honest here, if I were to walk into an arcade joint back then this would be definitely my favorite machine. Come on, what's not to like about an insect-themed horizontal shooter where you take control of a flying insect mini-slayer? It doesn't matter that you never get to see the evil midgets, but damn it would've been cool!

That was then, but today it's virtually impossible to carry such enthusiasm for Insector X. The game aged badly, and does not offer anything beyond quirky aesthetics and food for nostalgia. I have yet to find a game with such bare bones scoring system, where I know beforehand what my score will be like when I reach the last stage. It's total old school stuff, in the sense that you shoot your way though a predetermined, mostly easy linear progression, fighting an even easier boss in the end of each level. Old farts like myself can get a mild kick out of it for the memories, but adrenaline hounds should stay away - there's no reason to even try it if you're expecting the intensity of contemporary horizontal shooters such as R-Type, Gradius or even Taito's own Darius. 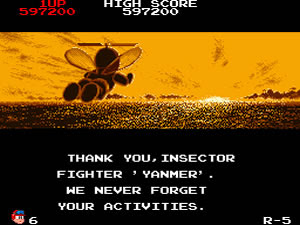 They never forget my activities

Yanmer the insect slayer fulfills his mission wearing boots and gloves, just like the wasp, the grasshopper, the moth, the spider and the praying mantis bosses. Together they're the cream of the crop of the game's goofy design, which also encompasses the childish music and the overall cartoony presentation. Stages are divided in two or three sections with different single backgrounds (desert, garden, city, jungle and hive) with no graphical frills of any kind, not even parallax scrolling. Regular enemies are represented by smaller creatures such as bees, flies, ants, frogs, fish, ladybugs and even possessed mushrooms. Most of them offer no real danger, but upon dying they may fire single bullets with varying speeds, resulting in overlapping patterns that leave no space to evade if you're not correctly positioned or constantly moving. It's safe to touch any part of the scenery, just be careful not to get crushed behind an obstacle as the screen scrolls (it's pretty common to die like this in the hive section).

The main shot is upgraded with the P icon. Besides the regular firepower, our insect warrior can also shoot two types of special weapons, which are provided and powered up by an icon that looks like an insecticide can and cycles colors. The blue can activates a forward attack, while the orange can deploys ground bombs. These special weapons have four very distinct power levels each, and once you max out both the main shot and the special weapon you're practically a powerhouse. Autofire gets activated with the A item, and speed-ups come in the form of the S item. Other icons consist of the screen wipe-out (lightning sign), power-up preserve (interrogation mark), hazelnuts (worth 1.000 points) and occasional 1UPs. Score extends are given with 100.000, 400.000 and 660.000 points, and dying strips you down to the default power/speed, a situation that's pretty hopeless in later stages.

It's not really the simplicity or the lack of challenge, what ultimately kills Insector X is the absolute absence of a scoring scheme. Even the one that's implemented seems to be faulted, since you get 100.000 points for every stage you complete except for the last one. You get absolutely nothing by defeating bosses, so the fight against the final enemy in stage 5 is useless if you're playing for score. This leads to an obvious conclusion: in order to maximize score you need to sacrifice lives and exploit the checkpoint system. Hint: look out for the "?" sign in the last stage, that's the best point for checkpoint milking. Seeing as the game is pretty short, milking all lives doesn't take too long.

Insector X saw ports released for both the Famicom and the Mega Drive. While the Famicom version preserves the goofy graphics of the arcade, the Mega Drive game had a completely different approach towards graphical design, which infused it with a much more serious tone and made it superior to the original in pretty much all aspects. Only the music is debatable, mostly because both soundtracks fit their respective themes quite well although none of them is remarkable in any way.

Click for the option menus translation for Insector X on Taito Memories Vol. 2

In the 1CC high score below (NORMAL) I milked the second-to-last section of the last stage as far as I could, beating the last boss in my last life. Don't forget to return to the main screen if you want your scores to be saved! 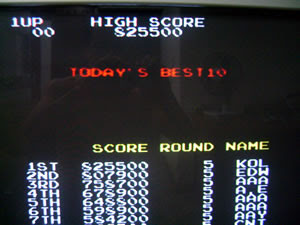