The Aleste series of shooters was born on the Japanese MSX home computer with a game called Aleste, which was in many ways very similar to Compile's own Zanac, the company's first shoot'em up. Aleste was ported to the Master System soon after its debut, and out of Japan it was renamed as Power Strike. From what I've seen in videos of the MSX game, the SMS version went through some graphical changes and completely ditches the original cut scenes. I can't say anything more to compare both versions, but as far as ports go Power Strike seems to be a decent conversion. What I can state right now is that I don't agree with its fame of being an extremely difficult shmup (it's hard but not that much). Granted, I might be biased by having previously experienced Zanac on the NES, a much harder and intricate game to play and master.

In fact, Aleste/Power Strike seems to be a stripped down version of Zanac. Both games share the same vibe, flow and gameplay basics, but Power Strike has none of the secrets and details that make Zanac such an elusively rich shooter. Moreover, the famous AI that generates enemies based on the player's performance is totally absent from Power Strike. In a nutshell, the game can be described as a straightforward take on Compile's original Zanac formula, and history is proof that it was the concept chosen by the company to be further fleshed out in future games. After all, Zanac never received a proper sequel apart from Zanac Neo on the PS1, while the Aleste series continued in several other titles and platforms. 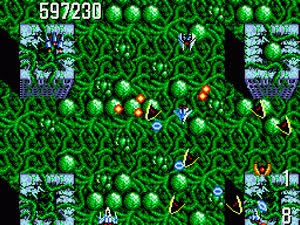 Power Strike is an intense, frantic game. Shoot your main weapon with one button and the special weapon with another. The main shot is upgraded by taking the P chips left by small spaceships that come hovering from the top of the screen. It takes lots of them to achieve maximum power, and the most interesting detail about this is that they also increase the ship's speed, fortunately never to a level where it gets too fast. Special weapons are numbered from 1 to 8, and you always start with the default special weapon 1, a stream of energy balls fired in the direction you've moving. These extra weapons are selected by taking the numbered ground icons or by collecting the ones that come flying from the top at regular intervals. Special weapons have the ability to block all types of enemy shots, but they vary greatly in style and effectiveness. Thankfully it takes just a few rounds for everybody to figure out which special weapons better suit their play style.

The catch is that with the exception of the default special weapon all others have limited ammo. This ammo starts with a counter of 80, which decreases as you use it, and to refill it you have to pick another special weapon icon (if the counter reaches zero the special weapon gets back to type 1). Sticking to the same special weapon will increase its range and power, but changing it when you're maxed out will activate the next weapon at its initial power level. Eventually it becomes clear that you gotta be a little stingy when using your special weapon if you want to keep it powered up. Hint: special weapons always come from the top consecutively, one after the other, so you will always have the chance to refill the counter with the same one if you're patient. If you have the chance to prolong a boss fight to gain some time there's no reason why you shouldn't do it.

Monster plants with super intelligence and waves of flying machines piloted by zombie human slaves are what your enemy is supposed to be (taken directly from the game's manual). Enemy design is rather simplistic and, just like in Zanac, a bit generic - all bosses are basically sets of turrets grouped together, with later stages including more and more mid-bosses as you approach the end of the mission. Endless landscapes scroll by at varying speeds while a non-stop barrage of resistance is unleashed on the screen, providing for a good level of gameplay intensity and decent shooting fun. A certain amount of slowdown as well as a bit of flicker are to be expected, but fortunately none of them impairs the final result of the game. And even though the music is run-of-the-mill 8-bit stuff, the BGM for the 4th stage is definitely a highlight in awesomeness.

Challengewise, Power Strike is above average and demands a bit of strategy to be won. It's nothing extraordinary, but dying later into the game can lead to successive cheap deaths until you're finally able to recover. There are lots of score-based extends, which start with 20.000 and 100.000 points and keep coming at intervals of 100.000 points. Sometimes you even get two extends at once, I just don't know why it happens. Scoring is simple and consists of killing everything and getting all P chips because they're worth something (170 points each). Strangely enough, the final boss is the only one that does not time out, therefore it can be milked to no end if you're able to not kill all of his seven eyes.

My copy of the game is the US private release, which wasn't found in store shelves and was distributed exclusively by mail. The cover art is all monochromatic, as opposed to the colorful versions found in other regions. Power Strike received a sequel on the Master System that's completely different from the MSX Aleste II and also holds the distinction of being the rarer and most praised shmup on the platform.

I did milk the last boss in order to get the 1CC high score shown below. My favorite special weapons were 6 (wave shot), 8 (staggering laser) and 2 (charge blast). Once the game is beaten, selecting the CONTINUE option at the start screen will activate stage 0, which is nothing more than an accelerated version of stage 1 with a different color palette. 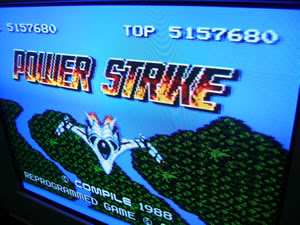