Ladies and gentlemen, behold one of the contenders for game with the most generic title ever. Any doubts about that? And the best thing about A Shooter is that it is, well, a shooter! Although this little game fails miserably to sell itself and is often object of mockery upon a quick glance at its cover, the truth is that it's actually quite decent given the budget constraints and the limited production values involved. Once again, it's an example that in order to do things the right way one needs no big money and no big name. Keep it simple, but keep it good and make it interesting.

In the shmup world there's nothing more classic and emblematic than a spaceship cruising the vastness of outer space shooting other spaceships. That's exactly where A Shooter starts, against a shy background of scrolling stars and punctuated with just a few enemies prior to an easy boss fight. It's pretty underwhelming, to be honest. But then the magic of the genre (and the cleverness of the developer) starts to rear its shiny head. With the exception of the scrolling stars in the background, which remain the same throughout the whole game, everything else will receive a welcome boost that turns A Shooter into a surprisingly challenging and fun experience. 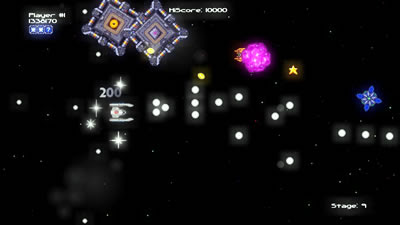 It seems dull, but it's actually fun

Every level comes with one power-up hidden inside a pink meteor. Power-up effect is permanent, but don't miss one or you'll be slightly underpowered during the next wave. The initial firepower is almost a joke because it's so weak, only by stage 3 it starts getting better. Each level adds a new enemy to the ones you've already dealt with, steadily increasing the challenge and the need to focus in specific dangers. As for the bosses, they're basically the same small ship that shoots the most varied bullet configurations, also getting harder with every level. One of the best features in A Shooter is that the stages are short, so the slow pace never results in dull gameplay, rather instilling the will to come back for more. Even though there are no continues, the game saves your progress and allows the selection of any beaten stage when you start a credit.

The player is allowed to take two hits before dying, and this is indicated by the color of the ship's core: green means no hits taken, yellow means you've been hit once and red is a warning of imminent GAME OVER. This life/health reserve is reset in every stage, so you'll always be able to sustain at least two hits per level. At first I thought this made the game too easy, but by the time I got to stage 9 I didn't feel the same way anymore. Blame it on the ship's large hitbox and slow speed, which demand a strict adaptation to enemy behavior and bullet manipulation. Fortunately hit detection is implemented in a competent manner, so the game never gets unfair. Tough, yes, sometimes even close to bullet hell, but not cheap at all.

Starting stock for bombs is three, and for every defeated boss you get another one out of three types: the bullet nullifier, the bullet deflector and the bullet applefier (or fruiterizer, as the developer calls it). This last one is pretty cool, since it turns all enemy bullets into apples that are worth 500 points each. Scorewise it's the only type of bomb worth using (and only during the last stages), since unused bombs result in a better end-of-stage bonus. Speaking of which, a 100% health (green core) at the end of the stage yields increasingly higher bonuses, so don't get hit and watch you scores inflate. Other collectibles that are worth something are the stars (cumulative value within the stage, up to 10.000 points each) and the occasional bee (worth 10.000 points).

Bomb treatment could've been better. A full stock will not let you incorporate the new one you get from a defeated boss. The game always starts with three nullifiers, so if you want to get the applefier it's mandatory to bomb in order to gamble on new random bombs. There's a reasonable default autofire enabled, but if necessary you can get a slightly better firing rate by tapping the button.

Trailer for A Shooter
(courtesy of YouTube user and developer SorceryGames)

A Shooter is worthwhile fun and shows a near perfect balance between a humble indie spirit, length and challenge. The music is excellent and the loud sound effects for the explosions are great. If you want to mess with the backgrounds there are several sizes you can apply to the scrolling stars in the OPTIONS menu, it's even possible to eliminate them completely. I was slightly impressed with the written tutorial, because in teaching how to play the game it also gives very solid information on how to approach gameplay in any given shmup. It's especially useful for uninitiated gamers who want to get better at the genre. Who would guess such a nice lecture would be hidden inside a little indie shmup?

The local leaderboard does not make any distinction between difficulty levels, which is a shame. There is also a global table but it's disabled on my console, probably because I'm not a gold subscriber... And below is the 1CC result I achieved on NORMAL: 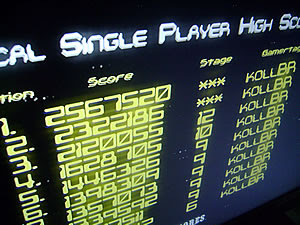