After its debut in the arcade scene as a full-blown company with Sengoku Ace, Psikyo gave birth to two new shmup series practically at the same time. While Strikers 1945 adopted a straightforward military theme, its sibling Gunbird invested in a fantasy setting with slightly wacky humor. Both share the same basic structure, therefore the "sibling" association and the undeniable stench of lazyness that pops up whenever people start digging deep into Psikyo's output. Yes, Strikers 1945 and Gunbird are indeed drawn out from the same mold, shmup soul mates that have been poorly scrutinized by critics and players alike. But that doesn't mean these games aren't worthwhile.

The truth is that value in Psikyo games is almost exclusively gauged by gameplay, unlike the majority of titles out there, even shmups. Unless you find that sweet spot where a Psikyo shmup starts getting compelling, more often than not you're left with a "very short game" and varying degrees of frustration. Appreciation for graphical design, though well deserved in its own right, is put aside in face of the game's merciless bullet patterns. What matters is that Gunbird is quintessential Psikyo, not overly tough but no walk in the park either, and offers a great burst of fun that's also a nice way to test if the company's style is your cup of tea. The Playstation port is a controversial choice to try it, but more on that later.

Choosing one of five characters will make the game more or less difficult, never mind their polemic characterizations. Ash is supposed to be a pedophile and Tetsu is openly homossexual, but that I derived from others who were able to read the Japanese text in the cut scenes. Too bad I can't understand them. 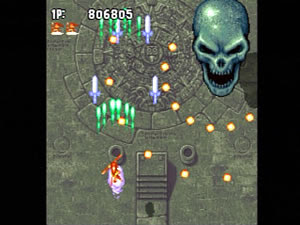 Yuan Nang floats on her cloud against one of the bosses

All characters have the same basic attacks, which consist of the normal weapon (rapid fire), a charge shot and a bomb. They all have varying speeds and mildly different charging times, with bombs that might make a difference between life and death when you're trapped - Ash and Tetsu were shafted with a noticeable delay on their bombs, so extra planning is definitely needed when using them (no panic function for these guys). However, Ash is the fastest and has the strongest shot, while Tetsu is the slowest and weakest with the exception of his powerful long-range charge shot, which seems to take longer than the others to charge. In the middle spectrum we have protagonist Marion, a Sailor Moon-esque teenager who rides a broom, controls a talking rabbit (obvious Alice in Wonderland reference) and whose average firepower is complemented by homing stars (good to take out random popcorn stuff). Yuan-Nang and Valnus both share devastating close-range charge shots, but since his bomb lacks power it's quite clear that Nang is the best character in the game.

Items are released by oval carriers, larger enemies or boss parts, and consist of power-ups (P) and extra bombs (B). Psikyo implemented a timed power-down scheme in Gunbird: it takes three power-up items to reach maximum power, but this maximum level only lasts for a while unless you take another P before this time expires, for which you also score 2.000 extra points. Probably in order to compensate for this and the increasing bullet count, whenever you touch an enemy one of your power-ups will get loose and wander off for you to re-take it (if you're at the default level you start expelling bombs). After a while you'll pretty much find yourself preserving power-ups on screen so that you can always be at maximum power and benefit from the score bonuses. Scoring can also be positively affected by taking ground coins and by destroying all boss parts before dispatching them.

The initial three stages are shuffled from four available ones, with the last four being played in a fixed order. Bosses are huge machines operated by a group of vile and funny thugs led by a femme fatale, who stole and broke a magical mirror that all heroes are trying to put back together in order to fight the evil last boss, as seen in the intro to the game. Dialogue is shown both in-game and between stages, and if you're playing in co-op they will change to reflect the interaction between the characters. I like the music and the way it goes from cartoony compositions to darker, more serious tunes as the game comes closer to the final sections.

Just like most Psikyo shooters, Gunbird rewards aggressive play and encourages point-blank strategies. Rank is dependent on survival, and the longer you stay alive the faster bullets will come towards you. Playing this game in short bursts is probably the best approach to avoid burnouts and ragequits, soon enough it clicks and the loop is reasonably within reach. There's only one extend at 400.000 points, and if you're able to beat the game prepare for a speedy bullet hell in the second loop. Remember that continuing doesn't reset the score, instead it adds a "1" to the last digit.

Regarding the Playstation ports, the copy I own is the Japanese one. It comes with character and art galleries as extras, and the game itself runs in a wobbling fashion that's not as bad as it sounds. Unfortunately there's no saving functionality and no TATE option either, both being the main reasons why Gunbird on the Saturn (Japan exclusive) is the superior port if you have to choose one. Please avoid the US localization for the PS1. Released by XS Games in 2003 as Mobile Light Force, it's an atrocity that disfigures the original character design beyond recognition, since it changes some of their names and removes all the in-game text. In this version Valnus is called Milf 2000! What were these people thinking?? They also removed the animated intro and all galleries present in the Japanese port. Well, at least the gameplay was left intact, if that counts for something...

Since I had already used Yuan-Nang when I beat the Saturn version, this time around I played with Marion. The final score below ended at the boss in stage 2-1, with the default difficulty setting (5). 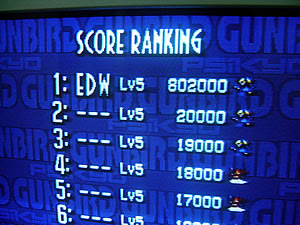