Also known in Japan as Same! Same! Same!, Fire Shark is the supposed sequel (spiritual or not) to Flying Shark, called in some parts of the world by the name Sky Shark. The game represents an early peak of one of the branches in Toaplan’s creative styles, the one related to an earthly aircraft battling all sorts of enemies in a war setting. Graphically rooted in reality and far from the growing sci-fi trend that was taking over arcades at the time, Fire Shark features more of the same familiar environments and enemies previously seen in its predecessor and in titles such as Twin Cobra, Taito’s Fighting Hawk and Capcom’s 194X series.

The Mega Drive port was handled by a company named Dreamworks, which has absolutely nothing to do with the more famous Dreamworks, maker of animated movies. Regarded by most people as a good conversion, Fire Shark for the Mega Drive is certainly the more colorful vertical Toaplan port in the system alongside Truxton. The long levels, the slow pacing (only Twin Hawk feels slower) and the milder difficulty all make it one of the best choices to get acquainted with Toaplan’s vertical shooters on the Mega Drive. As a consequence, boredom is a risk some of the more seasoned players are bound to face. Biplanes and tanks might be a bit out of fashion these days, but those who cherish the blossoming days of the scrolling shooter will feel right at home here. 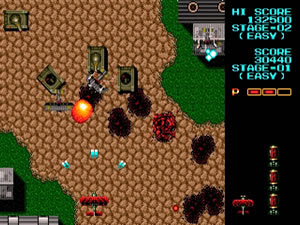 Items are released by small zeppelins that approach slowly from the top and by selected medium-sized enemies. Three power-ups (P) are needed to increase the plane’s firepower, with a total of three upgrade levels. This means that you have to collect nine P items to achieve maximum power. Surplus power-ups will serve as future upgrades when you die, so instead of starting the next checkpoint with a bare craft you’ll actually respawn with a slightly more powerful plane. Selecting the type of weapon is independent from the upgrading process and is only possible with the colored icons that bounce around for a while before leaving the screen. Blue (default) is the regular vulcan pattern, red generates a menacing fire beam and green activates a wave shot. At maximum power most people tend to prefer the red weapon due to its side and rear coverage, but my favorite one is the vulcan. It’s simply devastating at point blank distance, with a great performance against enemies coming from the top (red has dangerous dead zones and green lacks side reach).

Autofire is disabled by default but can be enabled at the options screen. Fire Shark is a bit weird with autofire because the shooting rate given by the game is awfully slow, especially with the blue weapon. The red flame is naturally immune to this, while the green wave is powerful enough to override it. In later power levels, however, vulcan becomes a killer weapon regardless of the autofire rate. In general, having a favorite weapon leads to tense moments because the game eventually throws lots of unwanted colored items on you. Take'em or dodge'em? Either way things will heat up a bit, at least for a little while.

Speed is increased by taking annoying S items that tend to bounce closely around the edges of the screen. The good news is that speed-ups stop coming once three of them are collected, so don’t worry about getting too fast. B stands for an extra bomb and is the most important aspect of the scoring system. When a stage is completed the bomb stock serves as a multiplier for the amount of bolt-shaped icons you have collected. Huge bonuses can be achieved if you manage to reach the maximum bomb stock of 10. On the other hand, zero bombs mean absolutely zero bonus.

Powering-up, stocking more bombs and not dying are great for scoring. However, a good performance is always followed by the inevitable rank progression: enemies shoot more often and their bullets get increasingly faster. This is particularly noticeable after you die and have to restart with reduced power levels. More than anything else though, death has a devastating effect on scoring. This happens because extra lives are obtained by the dozen... Besides granting a first extend with 70.000 points and a new one for every extra 200.000, the game will kindly throw 1UPs and 2UPs every once in a while. As you gain more experience life stock gets so high that it might take a long time until those red planes start disappearing again. It's this benevolence that takes Fire Shark down a notch in the difficulty meter for Mega Drive Toaplan ports.

Stages 1 to 3 - note: red weapon does not appear correctly in the video capture
(courtesy of YouTube user PickHutHG)

Occasional slowdown hiccups will happen if too many enemies come down on you at once. These don't affect gameplay at all, I'm always a bit more worried about the confusion caused by the animation of dying biplanes. They don't explode right away when hit, instead their wings start flaming and they spin a little out of their regular trajectory for one or two seconds before disappearing. Even though they're harmless during their death animation the chances of having a visual mess for a brief while can lead to a stupid death. Once this happens the player must watch as his own craft goes through a similar death animation before gameplay is resumed in a previous checkpoint. The checkpoint system gets really tough in the last third of the game, mainly due to the sluggish default speed of the biplane and the fact that the first speed-up takes some time to appear. Warning: dying too soon will send you further back in the stage. Where have I seen that before? :)

Musically Fire Shark is no disaster, but it certainly falls short when compared to Flying Shark. Themes start repeating in stage 6, but despite that they serve well as a fitting background for the heroic quest of the red biplane. It's nothing out of the ordinary but gets the job done. Some of the tunes remind me of the music in Truxton.

My best run on NORMAL with autofire ON saw me dying my first (stupid) death at the start of the last stage, as a green weapon came my way and I panicked inside the biplane corridor (don't move horizontally when the stage starts and you'll be safe). I was still able to make it to stage 2-6 with the result shown below. Remember that the default starting difficulty is EASY. 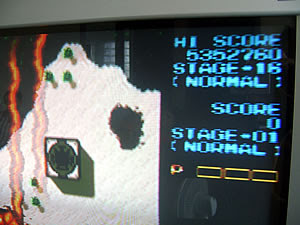